Wilhelm II of Bavaria-Straubing (also Wilhelm von Oostervant ; * April 5, 1365 in The Hague (?); † May 31, 1417 in Bouchain , Hainaut ), as Count of Hainaut Wilhelm IV and as Count of Holland and Zeeland William VI. , was the third Duke of Straubing-Holland from 1404 until his death . He was the eldest son of Albrecht I of Straubing-Holland with Margarete von Liegnitz-Brieg, married to Margarete von Burgund , the sister of Duke Johann Ohnefurcht, and Lady of the Order of the Garter .

With Wilhelm's grandfather Ludwig IV , the Wittelsbachers had established the Roman-German king for the first time in 1314. After the death of Ludwig IV. In 1347 Bavaria was divided among his six sons. Wilhelm I and Albrecht I received the Duchy of Straubing-Holland in the Regensburg Treaty in 1353 . This consisted of the Straubinger Ländchen in today's Lower Bavaria and the Dutch counties of Holland, Zealand, Friesland and Hainaut, which had come to the Wittelsbach family through Ludwig's wife Margarethe von Holland . After Wilhelm I was unable to rule due to a mental illness in 1358 , his brother took over the administration of the entire duchy until his death in 1404.

The year of death of Ludwig IV, 1347, marks a turning point in the history of Europe. The Black Death , a plague epidemic of unimagined proportions, spread across the continent and caused its population to shrink rapidly. The population decline lasted for over a century and only came to a standstill over forty years after Wilhelm's death. In addition to the devastating economic and demographic effects of the plague, the Hundred Years War broke out between England and France in 1337 . The influence of the church, which split for four decades in the Avignon Schism in 1378 , also declined. Because of this development one speaks of the time in which Wilhelm was born, also of the crisis of the late Middle Ages .

Youth and conflict with the father 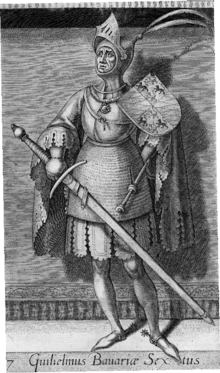 Albrecht I, Wilhelm's father, had been ruler of the Lower Bavarian part of the duchy since the Regensburg Treaty of 1353 and, due to a mental illness of his brother Wilhelm I, also ruler of the Dutch territories of Holland, Zealand, Hainaut and Friesland since 1358. He resided in The Hague. His son, who later became Wilhelm II, was probably born there in 1365.

Wilhelm was to marry Marie, a daughter of the French King Charles V , first; however, the bride died in 1377. So at the age of 20 he married Margarete , daughter of the Burgundian Duke Philip , at the glamorous double wedding of Cambrai on April 12, 1385 , while his sister Margarete married Philip's son and successor Johann. Numerous guests from all over Europe had come to the wedding. Among them was the young King Charles VI. who a little later married Wilhelm's cousin Elisabeth , who was called Isabeau de Bavière in France . In 1386/87 Wilhelm went on a trip to Prussia .

The sixty-year-old Duke Albrecht had taken precautions: his rule was secured by his ambitious marriage policy and three sons were available as successors: Wilhelm, who was to take over the Dutch counties, Albrecht II , who was intended to rule in Straubing , and Johann , who was Fürstelekt headed the diocese of Liège .

However, the relationship between Duke Albrecht and the Dutch noblewoman Aleida von Poelgeest caused unrest on the domestic front. The city's cod party tried, with Aleida's help, to expand its influence at Albrecht's court, while the old aristocrats made a pact with his son Wilhelm, who was entrusted with the administration of Hainaut at the time (for the background, see the hook-and-cod war ). The conflict between father and son culminated in 1392 with the murder of Aleida and the ducal court master Willem Cuser, probably caused by the Hoeken . Albrecht was finally able to prevail, Wilhelm had to flee to England . As early as 1394, however, the two were reconciled and Wilhelm received his governor rights back.

Father and son carried out a series of campaigns against the rebellious Frisians , who wanted to break away from Holland and submit directly to the Roman-German emperor , at considerable financial expense, but with no clear result . Albrecht I died on December 13, 1404 after more than 46 years of reign. He had strengthened the newly formed duchy economically and domestically in 1353 and brought it to European size through his marriage policy. He was succeeded by his sons, Wilhelm in the north and Johann, who had moved up for his brother Albrecht II, who died early, in the south.

Wilhelm II, shaped by the contact with the powerful neighbors France and Burgundy, confidently followed in the footsteps of his father, whom he also wanted to follow in his marriage policy. He married his only daughter Jakobäa in 1406 when he was a child with the only slightly older Johann von Valois , the son of King Charles VI. of France, who was made heir to the throne in 1415.

Domestically, however, the ambitious Wilhelm was less successful than his father, who was more concerned with compromising. In particular, his relationships with the Dutch nobility were not the best. So he fell out with the Lords of Arkel , an influential Dutch family. The growth of the cities spurred brick production and the invention of salted herring revolutionized fishing. As a result, the fish trade and shipbuilding flourished. A financially strong class of shipowners and merchants emerged who also ran textile manufacturers and promoted brewing .

The ducal court in The Hague also gave cultural impulses. Like his father before him, Wilhelm organized knight tournaments and supported heralds such as the important "Herald Bavaria" Claes Heynen . In the Battle of Othée in 1408, together with his brother-in-law Johann Ohnefurcht and his cousin Ludwig von Ingolstadt, he put down the revolt of the Liège against his brother Johann, who had tried to transform Liège into a secular principality. In 1412 he granted Ludwig asylum in Valenciennes after he had fled Paris.

Despite all his successes, Wilhelm also had to struggle with some problems. The Frisians, whom he had never finally defeated, remained restless and in 1414 retook the town of Stavoren , which the Duke had taken from them in 1398. His association with John of Burgundy drew him into the conflict between Armagnacs and Burgundians for rule in France. Wilhelm intervened successfully on the Burgundian side, but could not prevent Hainaut from being devastated by the troops opposing each other in the Battle of Azincourt . Because of his quarrel with the Lords of Arkel, he also had to fight a seven-year war with Duke Rainald von Geldern , to which they had submitted against his will.

Even if Wilhelm finally remained in control of the situation, his unexpected death came on May 31, 1417 at the worst possible time. He died as a result of a dog bite and only left a sixteen-year-old daughter who now had to defend herself against the claims of her uncle Johann, who would have liked to bring the Duchy of Straubing-Holland under his leadership. He gave up his diocese in 1418, left Straubing and, with the help of the codfish and the Roman-German King Sigismund , to whose niece he was married, he achieved rule in the Netherlands until 1420.

This version was added to the list of articles worth reading on June 20, 2006 .