Stavoren (formerly Staveren ; West Frisian Starum ) is a place in the Dutch province of Friesland .

The place is on the east bank of the IJsselmeer , a former North Sea arm that is now sealed off . The place, located in the municipality of Southwest Fryslân , has 950 inhabitants. Today the place lives mainly from tourism , which is almost completely oriented towards water sports .

Stavoren is the oldest of the eleven Frisian cities . The place was built around the year 900 on a watercourse and gained city rights between 1058 and 1068. In 2011 Stavoren celebrated 950 years of city rights. Stavoren had good trade relations with the countries around the Baltic Sea and was a Hanseatic city from 1385 . Stavoren gained importance through the import of grain from the countries bordering the Baltic Sea, which was needed for the rapidly growing Frisian population, but never achieved the status and wealth of the North Dutch cities on the western shore of the IJsselmeer. After all, the Frisian kings resided here.

At the end of the Middle Ages , Stavoren fell into disrepair, the port silted up and the place no longer played a role in grain imports. The legend of the Wyfke fan Starum comes from this time .

In the 17th and 18th centuries, the city got better before it went into decline again in the 19th century.

In 1899 the place had 868 inhabitants. After the construction of the Stavoren- Leeuwarden railway and the establishment of a ferry connection to Enkhuizen on the other side of the IJsselmeer with a connection to the Zaandam / Enkhuizen- Amsterdam railway , the port of Stavoren gained in importance again.

Today tourism is one of the town's main sources of income. Several marinas were built on the outskirts .

The place is the end of the railway line from the provincial capital Ljouwert via Snits and Warkum to the IJsselmeer .

The Johan Frisokanaal ends at Stavoren , which is one of the connections between the IJsselmeer and the Prinses-Margriet Canal and thus creates a waterway connection to Ljouwert and Groningen . 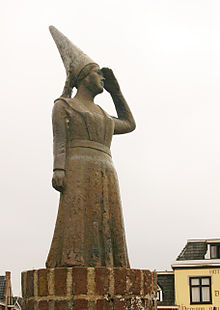 View of the drawbridge at the wife of Stavoren

One of the most famous legends of Dutch folk literature is about the medieval character Wyfke fan Starum (Dutch: Vrouwe van Stavoren) . This dates from the 16th century and is roughly as follows:

In the Middle Ages , the widow of a very wealthy merchant lived in Stavoren. The haughty woman owned more ships than all the other merchants and shipowners in the city combined, and her wealth grew day by day.
Despite her great wealth, she was not satisfied. She desired to have the most precious possession in the world and sent the captain of one of her ships out to get it for her. After a long journey in Danzig, he found the best wheat he had ever seen. He returned with this wheat.
But the merchant's widow had imagined other treasures. Angry, she asked the captain: "On which side did you have the wheat loaded?" He replied: "On the port side". Thereupon she ordered the skipper to dump the cargo on the starboard side back into the sea. A bystander heard this and prophesied that one day she would have to beg out of poverty. Then she pulled a precious gold ring from her finger and threw the piece of jewelry into the sea as well. She added: "As little as this golden ring will ever return to me, so little will I ever suffer poverty".
A short time later, the haughty woman's maid found the ring in a fish that she was preparing for lunch. The mistress was frightened. Then she learned that same evening that several of her ships had sunk “with man and mouse” in a storm on the high seas. Her misery never ended and the woman died a poor beggar.

The Frouwesân (women's sand), a sandbank in the IJsselmeer near Stavoren, is said to be the place where the precious wheat was thrown into the sea. A plant that looks like wheat but has no ears of corn is said to still grow here.

A statue of the "Wyfke fan Stavoren" has stood in the town center of Stavoren since 1969.

Yacht harbors and marinas in Stavoren