Postcode in the Netherlands, areas according to first digit

Individual streets often have different postcodes for the even and odd house numbers on each side of the street; in addition, longer roads are divided into sections that form a unit for mail delivery. Together with the house number, the Dutch postcode forms a unique code for each address; this unique code is also used for other purposes; For example, some bicycle owners have the code punched into the bicycle frame so that a found bicycle can be assigned to the owner.

In the Netherlands it is also possible to purchase data in which the postcode is linked to the geographical (x, y) coordinates of the Reich triangle system. Further data are in turn linked to these postcodes, for example the number of apartments that belong to this postcode. This data is often needed to make statements about the inhabitants of the Netherlands with the help of geographic information systems and to find out something about their surroundings, for example property prices, population density etc.

Dutch addresses have the following format: 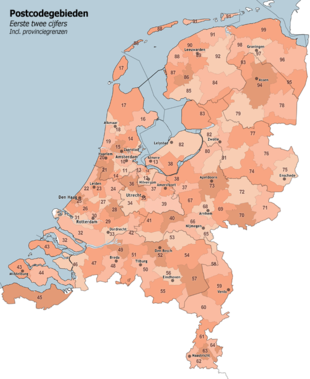 Commons : Postcode maps of the Netherlands  - collection of images, videos and audio files