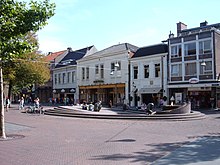 Enschede [ ˈɛnsxəde: ] ( listen ? / I ) ( German Enscheid , Lower Saxony Eanske ) in the province of Overijssel is a city in the east of the Netherlands with 158,969 inhabitants (as of January 31, 2019). In the rural areas of Enschede in particular, many long-established residents still speak their Westphalian dialect of Lower Saxony (Nedersaksische taal) .

The city belongs to the Twente region between Hengelo and the border with the Federal Republic of Germany. The neighboring city to the east is Gronau in Westphalia .

Enschede developed in the early Middle Ages from a Low German settlement on the trade route between Deventer and the neighboring towns to the east. The name Enschede probably goes back to the Low German “An de Schede”, in High German “an der Scheide”, and according to current theory it indicated the neighboring moorland, the Amtsvenn . In 1325 Enschede was officially granted city rights by the Utrecht bishop Jan van Dienst .

With the separation of the Dutch provinces from the Holy Roman Empire as a result of the Peace of Westphalia concluded in 1648, a new border arose near this city, which ran through the middle of the Lower Saxony- speaking area and was later referred to as the Dutch-German border. Due to a municipal reform, Enschede now also includes some villages in the area, including Glanerbrug and Boekelo . Their large salt factory was relocated to nearby Hengelo in 1952 .

In 1862, Enschede was almost completely destroyed by a major fire. When the Englishman Thomas Ainsworth , inventor of a new weaving process , settled here shortly afterwards , the city developed into the most important location for the textile industry in the Netherlands, from which the neighboring city of Gronau also benefited over the long term. The region had traditionally experienced skilled workers in home weaving who worked for low wages. The raw materials for the textile industry, including cotton, were imported from the former colony of the Dutch East Indies , now Indonesia . During its heyday, Enschede had 75 textile factories.

During the Second World War , Enschede was one of the first Dutch cities to be captured by the German Wehrmacht due to its location near the border. The resistance fighters succeeded in saving Jewish citizens of the city from their deportation and thus from the Holocaust by hiding them on farms in the area or by taking them away. Around 500 of the 1300 or so Jews living in Enschede survived the war.

Most of Enschede's resistance fighters were killed shortly before the city was liberated when they were betrayed by a spy who allegedly sympathized with German sovereignty and who gave the occupiers a cellar as a secret meeting point for the resistance. The Germans then went to this meeting point and threw grenades into the basement, killing most of those present.

Unfortunately, due to its location directly on the German border, Enschede was bombed several times by Allied forces because the city was mistakenly mistaken for a German city. That is why Enschede suffered immense war damage. The majority of the responsible Allied units had the actual intention to bomb the German Gronau, only a few kilometers away. In May 1945, shortly before the end of the war, Enschede was liberated by Allied troops, most of which were Canadians.

With Indonesia's independence in 1947 and because of the increasing competition from Southeast Asia from around 1965 , the textile industry finally disappeared from the region. A textile museum was set up in the old Janninksfabrik on Haaksbergerstraat, in which the old times can be traced.

In the 1990s, there were considerations to merge Enschede with Hengelo and Borne to form a "Twentestad". At the end of 2001, the municipal councils of these three municipalities joined forces with Almelo to form a cooperation network called Netwerkstad Twente . In turn, Netwerkstad works together with Münster and Osnabrück in the MONT city triangle (Münster, Osnabrück, Netwerkstad Twente).

On May 13, 2000, the explosion of the fireworks factory SE Fireworks destroyed a large part of the Roombeek district ; 23 people lost their lives in the disaster, including four firefighters.

In Station Enschede start IC trains to Amersfoort - Amsterdam / Rotterdam / The Hague , as well as local transport services with the Sprinter to Almelo - Zwolle - Deventer and after Apeldoorn . The latter also serve the Enschede Kennispark stop to the west of the Grolsch Veste stadium / University of Twente . The Euregio-Bahn (RB64) Enschede - Gronau - Münster runs every hour; The Westmünsterlandbahn (RB51) runs through the Münsterland in the same rhythm via Gronau, Coesfeld , Dülmen and Lünen to Dortmund , so that there is a half-hourly train service between Enschede and Gronau during the day. The De Eschmarke and Glanerbrug stops are also located here . In Enschede you have to change trains in any case, continuous connections are structurally no longer possible at this border station . The Ahaus – Alstätte – Enschede Süd line was dismantled on the Dutch side in 1971.

On the trains between Gronau and Enschede, the regional Westphalian tariff , the NRW tariff (Schöne Tag Ticket NRW and Schöne Fahrt NRW), the Quer-durch-Land-Ticket and free travel for the severely disabled are recognized. The Nederlandse Spoorwegen tariff also applies between Glanerbrug and Enschede.

Bus traffic in Enschede is served by a dense city bus network operated by Keolis Nederland . Regional buses run to all of the surrounding cities at frequent intervals.

Enschede is home to the brewery Grolsch , the tire manufacturer Vredestein and the Jazz - label Criss Cross Jazz . In addition, several cross-border IT companies are currently located in Enschede (including the Equinix data center ), as well as artisanal screen printing companies . In Enschede there is also the editorial office of the regional daily newspaper De Twentsche Courant Tubantia as well as a casino branch of the Holland Casino ( Casino Enschede ).

The New Dish Hotel Tower project is currently being planned, which will be the tallest building in the city with a height of approx. 130 m.

Enschede is the location of various universities. In addition to the technology-oriented University of Twente , the following should be mentioned:

Of the approximately 44,000 students in the city, many come from the Westphalian Münsterland , the Emsland and the county of Bentheim because of the proximity to the border .

In Enschede there is also a location of the Netherlands Organization for Applied Scientific Research . 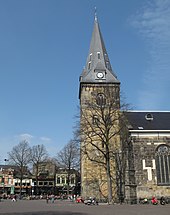 Characteristic of the musical culture in Enschede (and Gronau ) was the German-Dutch connection up to 1945 (and in some cases into the 1960s), which resulted from the historical cooperation in the border area and the textile industry that shaped the 19th and 20th centuries . Especially in the period of upheaval after the First World War , a close and successful German-Dutch cultural cooperation developed in Gronau and Enschede, which increased from string quartets , salon orchestras and hot dance bands to symphony orchestras and an operetta company with its own premieres. Today's Orkest van het Oosten received impulses from this music scene; the Reisopera had a forerunner in the Enschedesch Opera en Operetta Gezelschap, founded in 1935 . At the same time, jazz found followers from 1920. The neighboring town of Gronau still offers a cultural spectrum today and is even relevant for scientific research due to the unusually dense landscape of amateur music clubs. With the new building of its "Muziekkwartier", Enschede is developing into the music city in the east of the Netherlands.

Municipalities in the province of Overijssel