The title of this article is ambiguous. Further meanings are listed under Zwolle (disambiguation) . 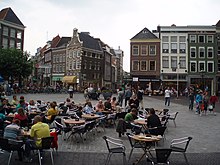 Zwolle ( listen ? / I ), located near the IJsselmeer , is the capital of the Dutch province of Overijssel . In the area of ​​Zwolle, the Zwarte Water , which is only 19 km long , is created, which then also directs the water of the Vechte ( Overijsselse Vecht ) into the Zwarte Sea . There is also a canal to the IJssel , the mouth of which is near the neighboring village of Kampen .

At the place where Zwolle lies, settlement remains from the Neolithic and the Bronze Age were found. The city was built on a small sand ridge (suol, compare German: swollen) between the IJssel and the Vecht. It was mentioned in a document as a Swoller brand as early as 1040.

Zwolle received city ​​rights in 1230 , which were expanded in 1438 by stacking rights . As a free imperial city, it joined the Hanseatic League in 1346 and received the right to mint in 1488 . The 15th century was Zwolle's greatest heyday. Back then, like Deventer , the city ​​was a stronghold of the art of printing . There were also educational institutions of great importance. The members of the Brothers of Common Life or Devotio moderna worked from Zwolle and Deventer across north-western Europe. During this time, Zwolle worked closely with the neighboring towns of Kampen and Deventer, and they even minted common coins for several decades.

In 1528 Zwolle recognized Charles V as lord. After about 1550 there was an economic decline, although the city always retained one of the largest cattle markets in the Netherlands and several printing shops. In 1580 the Catholics were expelled from the city, which at that time joined the States General . In 1672 she surrendered to the Bishop of Münster, Christoph Bernhard von Galen . In 1674 the fortifications were razed but soon rebuilt. Under the French rule at the time of Napoleon Bonaparte , Zwolle was the capital of the Bouches-de-l'Yssel department (department of the IJssel estuaries) at the beginning of the 19th century . New upswing in Zwolle occurred around 1890 when the city was connected to the railway network.

The Jewish community of Zwolle was decimated by deportations to German concentration camps during World War II . The city was liberated by the Canadian soldier Léo Major alone , which is why a street was named after him. There were also several executions of resistance fighters in the city. Some war memorials still commemorate these events.

The municipality includes the tiny, picturesque village of Windesheim, on the IJssel and on the road to Wijhe , five kilometers southeast of the city. In the Middle Ages it housed the important monastery of the same name, where Geert Groote and Thomas von Kempen worked in the community of Brothers of Common Life or Devotio moderna . The Canons of Windesheim founded numerous reform monasteries in Germany, such as the Böddeken monastery . The bones of Thomas von Kempen are in the Roman Catholic Basilica of Our Lady of Zwolle . The monastery chapel (15th century) has been preserved to this day. The area around the village is suitable for a bike ride over the IJssel dike.

The most important industries include:

The residents of Zwolle are also called Blaufinger (Blauwvingers). In the Middle Ages there was a real rivalry between the neighboring cities of Zwolle and Kampen - traders from Zwolle were robbed, the cattle of the Kamper farmers were stolen.

The Zwollers had a dirty name for the people from Kampen: Kamper Störe (Kampersteuren). This species of fish was still found in the IJssel at that time. The Zwollers only got their bad name when Zwolle offered the carillon from a church tower destroyed by fire to the Kamper neighbors for sale. The campers agreed to the amount of the requested purchase price, but on the condition that they could determine the method of payment themselves. One day wagons full of “four duiten stukken”, coins of very low value, arrived from Kampen in Zwolle. The Zwollers got blue fingers from counting all the loose change. “Blauwvingers” therefore became a dirty name for the Zwollers.

Nowadays the Zwollers no longer view this term so negatively. Every year in July there are Blue Finger Days on Wednesdays. Then there is market and other entertainment for residents and visitors to the old Hanseatic city. 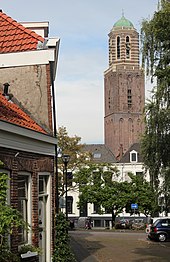 The Peperbus ("pepper box "), the tower of the Basilica of Our Lady, from the Eekwal 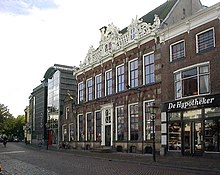 Drostenhuis (from the beginning of the 16th century, facade from the 18th century)

The city is also home to the professional football club PEC Zwolle , which rose to the top Dutch league, the Eredivisie , for the first time in 1978 and has belonged to it again since 2012 after several interruptions. In 2014 the club became Dutch cup winners .

VC Zwolle 's men's and women's teams play or have played in the highest Dutch volleyball league and have been Dutch champions several times.

With a relationship to Zwolle

Municipalities in the province of Overijssel