Arnhem is a redirect to this article. Further meanings are listed under Arnhem (disambiguation) .

Arnhem ( German  Arnheim ) is a large city in the Netherlands . It is the capital of the province of Gelderland . Arnhem lies on the Nederrijn , a relatively short section of the Rhine after the Rhine divides, where the Waal and the Nederrijn , later the Lek , arise.

Arnhem was built on a hill near the IJssel at the crossroads of trade routes between Utrecht , Nijmegen and Zutphen . Arnhem has only been on this river since the course of the Rhine was changed around 1500. 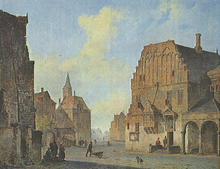 Arnheim appears in 893 in the Prümer Urbar. The quite extensive Prüm property there was grouped around the parish church, which remained in the possession of the Prüm Abbey until the Reformation . In 1233 Count Otto II von Geldern granted Arnhem town charter . In the 15th century, the city had around 4,000 inhabitants and received city walls and towers for defense. The city belonged to the Duchy of Geldern and became part of the Habsburgs in 1472 before it came to the Republic of the Netherlands. In the Dutch War , Arnhem was occupied by French troops from 1672 to 1674, as well as in the coalition wars from 1795 to 1813, with Arnhem being the capital of the Yssel-Supérieur department from 1811 . In 1813 the city was liberated by Prussian troops and fell back to the Netherlands.

Around 1850, about 9,000 people lived in Arnhem. At that time, the region around Arnhem and Nijmegen became a popular residence for the upper middle class from the western provinces of the Netherlands. As a result, representative parks were created, to which the city owes the nickname "Parkstadt" to this day. Parks like Sonsbeek and Zijpendaal (in the north of the city) shape the cityscape.

In 1929 KEMA , the Dutch testing center for the electrical industry, was founded in Arnhem.

During the Second World War , Allied forces tried in September 1944 as part of Operation Market Garden to capture the Arnhem bridge over the Rhine in order to pave the way to Germany . In one of their last victorious battles, however, the Wehrmacht won the battle, which contributed to the failure of the Allied operation "Market Garden". The city was badly damaged by this battle. After the battle, the Wehrmacht forced the then 95,000 residents to leave the city.

On September 16, 1978, the oldest and most famous Rhine bridge was renamed John Frost Bridge , after the British Colonel John Frost , who commanded the battalion that was the only one to reach the bridge and defended the northern section for four days during the unsuccessful offensive in 1944 . A plaque commemorates the battle and its many victims.

A dynamic reconstruction followed after the war. The city's population continues to grow today.

Arnhem is the only city in the Netherlands to have a trolleybus network ( trolleybus Arnhem ), which gives the city the nickname “Trolleystad” today.

The town hall of Arnhem and in the background the Eusebiuskerk

Ahmed Marcouch ( PvdA ) has been mayor of the municipality since September 1, 2017 .

College of Mayors and Aldermen

The College is for the period until 2022 of members of the party GroenLinks , VVD , D66 and PvdA . They were appointed during a council meeting on May 17, 2018. The following people belong to the college and are responsible in the following areas:

The office of municipal secretary is carried out by Rob van Wuijtswinkel.

The municipal council has been formed as follows since 2006:

aBefore the party took the name Arnhem Centraal on June 24, 2016 , it was called Zuid Centraal .

Description : A silver double-headed eagle with a gold frame and so beaked in blue . Shield holders are two red-tongued brown lions with silver reinforcement standing on a green arabesque ; a crown of golden leaves over the shield .

Bridges and other structures 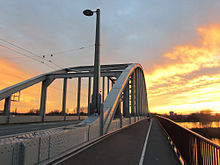 The Arnhem ship bridge was built as early as 1603 and, repeatedly renewed, remained in operation until 1935.

The 145 m high KEMA Toren transmission tower is not accessible to visitors. 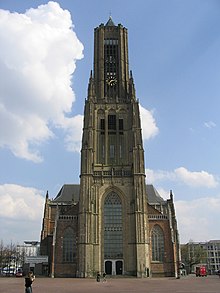 Local public transport in the Arnhem-Nijmegen region is operated under the brand name breng (Dutch for (I) bring ) by Hermes , a subsidiary of Connexxion . 13 urban bus routes operate within Arnhem, including lines 1 to 3 and 5 to 7 as the Arnhem trolleybus . Breng also operates regional, express and citizen buses.

The Arnhem Centraal train station is the only train station outside the Randstad that is nicknamed Centraal (comparable to the German central station ) and is a hub in the railway traffic of the eastern Netherlands. ICE trains to Utrecht, Amsterdam, Düsseldorf, Cologne, Frankfurt and Basel, as well as intercity connections to other parts of the Netherlands stop here. The regional trains are partly operated by Arriva and breng, and the Rhein-IJssel-Express  (RE 19) operated by Abellio Rail NRW connects the city with the Lower Rhine and Düsseldorf.

Arnhem is connected to numerous national and international long-distance cycle routes, including a. to the Rhine Cycle Route (the European EuroVelo route 15 from the source to the mouth of the Rhine), and also easily accessible from Germany by bike.

Considering the size of the city, there is a considerable cultural offer in Arnhem. The music scene takes place in the Musis Sacrum, the concert building where the Gelderland Symphony Orchestra rehearses and performs and where weekly jazz concerts take place. Since 2008 the Luxor , a former concert hall, has been rebuilt to complement the cultural offerings, especially in the field of pop and light music. The theater (Schouwburg) offers national and international companies a platform.

The Kunsthochschule Arnhem ( ArtEZ ) is internationally renowned for its open and experimental department for jazz and pop music , which is largely used by German students, its internationally oriented, renowned dance department, and its traditional theater department. Organized by students among others, local live jazz can be heard twice a week in Arnhem, in the “Cafe de Kroeg” and “Stella by Starlight” bars.

Once a year the city organizes a festival for street statues ( Living Statues ), and every two years the Arnhem “Fashion Biennale”.

The city's best- known sports club is the Vitesse Arnhem football club , which plays in the Dutch honor division and won the Dutch Cup for the first time in 2017.

In 2000, some European Football Championship matches were held in Arnhem in the GelreDome , Vitesse Arnhem's home stadium.

Sister cities of Arnhem are

Municipalities in the province of Gelderland