The Luchthaven Schiphol ( German  Airport Schiphol ) [ ˈsxɪpɦɔl ] ( IATA-Code : AMS , ICAO-Code : EHAM ) is the international airport of the largest Dutch city Amsterdam . With around 71 million passengers in 2019, it is the third largest airport in Europe (after London Heathrow and Paris-Charles-de-Gaulle ), and in 2018 it was ranked 11th worldwide . 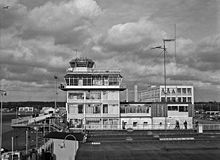 Pier E as seen from the tower 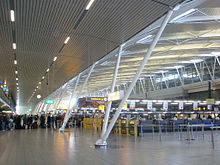 Schiphol opened as a military base on September 16, 1916. Here, smaller hangars served as airport buildings and a grass area as a runway . Since civil aviation use began on December 17, 1920, the airport has been called Schiphol . The place name Schiphol has been proven since 1447 ( Sciphol ) at the latest . There are a number of different theories about the meaning of the name Schiphol , although the origin is not certain. According to one of these hypotheses, Schiphol means something like "ship's hole" and can be traced back to the fact that ships regularly sank in the inland lake, the Haarlemmermeer , which used to be the site of today's airport .

As early as 1935, the airport had four asphalt runways. In 1940 it was occupied by the German Wehrmacht . From June 1940 to October 1944 was here a airbase commander of the German Air Force . Due to its location and the generous structure, during this time it mainly served as a base for twin-engine bombers, which took part in the Battle of Britain or the Capricorn Company from here .

In 2003 the longest run 18R / 36L (Polderbaan) to date was added. Between the Zwanenburgbaan and the Polderbaan run the connecting motorway A5 and the Hoofdvaart canal , over which planes fly; there is also the Gan Asjalom Hoofddorp cemetery of the Liberal Jewish Community of Amsterdam.

After the airport has existed for more than a hundred years and is nationally important or leading for the Netherlands, the airport was officially awarded the title royal ( Dutch koninklijk ) by King Willem-Alexander in 2016 .

Architects and planners for Schiphol Airport have been Benthem Crouwel Architects since 1988 .

Schiphol is located southwest of Amsterdam in the area of ​​the municipality of Haarlemmermeer . With an average height of around three meters below sea level, it is the lowest airport in Europe.

The airport is the train station Schiphol Airport directly connected to the European high-speed rail network. There are no transfer connections with the NS to Amsterdam , Utrecht , Leiden , Rotterdam , Eindhoven and The Hague . The Thalys runs several times a day to Antwerp , Brussels and Paris .

In the public transport Schiphol is connected to the tram and bus network of the Dutch capital by the buses of the Amsterdamer Verkehrsbetriebe (GVB) . In 1964, a boat shuttle to the city center was opened for the summer flight schedule. The two-hour drive to the downtown hotels was geared towards tourists.

The A4 motorway (Amsterdam – The Hague) has an exit to the airport.

Schiphol has a terminal with Halls 1, 2 and 3, which are connected to each other via the central plaza , in which the airport train station is also located. Each of the areas has several piers (a total of 8), at which a total of around 160 gates are available.

Both piers in Hall 1 are used exclusively for traffic within the Schengen area . In these areas, for example, European Star Alliance flights , including those of Lufthansa , are handled. 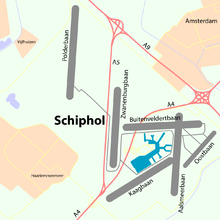 Boeing 747 on the taxiway bridge over the A4 E19 motorway

Unlike what is usual at many other airports, all six railways have been given names. Four of the slopes (06/24, 09/27, 18C / 36C and 18L / 36R) take their names from the locations that are flown over when using the lifts. Runway 04/22 has its current name Oostbaan from the geographical location in the east, the historical (and colloquially still in use) name Fokkerbaan is derived from the former Fokker aircraft works . The runway 18R / 36L, which was opened in 2003, was officially assigned the neutral name “Polderbaan”.

Schiphol is the home airport of the Dutch airlines KLM , Corendon , Martinair , ArkeFly and Transavia . In addition, Schiphol serves as the European hub for Delta Air Lines as well as the base for Vueling and, since 2014, for EasyJet .

Schiphol is of international importance for air traffic and has numerous European and intercontinental connections for passenger and freight traffic.

In 2014, the European routes to London-Heathrow , Barcelona , Paris-CDG , Rome-Fiumicino and Copenhagen were the most heavily used connections in passenger traffic ; in intercontinental traffic, Dubai , New York-JFK , Atlanta , Detroit and Minneapolis-St. Paul .

The shareholders of the airport operator Schiphol Group are the Dutch state with 69.77 percent, the cities of Amsterdam and Rotterdam with 20.03 and 2.2 percent, respectively, and Aéroports de Paris with 8 percent.

As part of a strategic partnership, there has been a cross-shareholding since December 2008 with the operator of Paris-Charles de Gaulle airport , which, alongside Schiphol, forms one of the aviation hubs of the Air France-KLM group.

Schiphol Telematics specializes in telecommunications services. The company itself was founded in 1991 as a joint venture between KLM, KPN and Schiphol Group and has been 100% owned by the Schiphol Group since 2006. Internet, voice, LAN, WiFi and carrier services are offered.

The airport is home to a branch of the Rijksmuseum Amsterdam , which presents changing exhibitions with free admission. The exhibition area is behind passport control and is therefore only accessible to passengers.

Since January 2012, specially marked Chinese-speaking employees have been available to travelers from China.

Airfields and heliports in the Netherlands