A low-cost airline (also cheap airline , airline , English low-cost carrier , no frills airline , budget airline ) is an airline that offers flights cheaper than traditional airlines and dispensed comfort features. Services such as the supply of food and drink are usually only offered for a fee or not at all. In contrast to network carriers , who offer a dense route network with transfer options, low-cost airlines mainly work with direct connections . 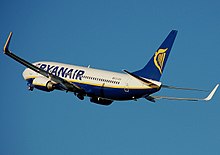 The principle of low-cost airlines originated in the USA and was started there by Southwest Airlines in 1971. The first European airline in this category was Laker Airways , which also offered low-cost intercontinental flights, but failed. In 1978 the Airline Deregulation Act was passed in the USA . This promoted low-cost airlines because, among other things, they could introduce cheaper special tariffs, but also increased corporate concentration and longer-term prices.

Ryanair took over the model in 1991 and has been expanding across Europe since 1995. While in 1994 only around three million passengers flew with low-cost airlines, most of them with Ryanair, in 1999 the figure was around 17.5 million. In 1995, British Airways decided to set up its own low-cost division called Go , which began operations from London Stansted Airport in 1998 . In the same year, easyJet started operating from London Luton . KLM followed British Airways' lead in 2000 by creating the low-cost airline Buzz . Wizz Air started operations in 2003 with four bases. In the 2019 financial year, it carried 39.8 million passengers. In 2020 the airline will be operating 124 aircraft and 32 bases in Europe and is about to found its subsidiary Wizz Air Abu Dhabi .

In Europe, easyJet and Ryanair are among the most successful low-cost airlines, because the deregulation of air traffic has enabled them to increase their passenger numbers enormously. Since Ryanair opened a base with Frankfurt-Hahn in February 2002, 100 kilometers from Frankfurt am Main , and two German low-cost airlines, Germanwings and Hapag-Lloyd Express (now TUIfly ), started from Cologne / Bonn Airport in autumn 2002 , low-cost airlines have also been booming in Germany. On average, every fifth flight in Germany is operated by a low-cost airline. This means that the share of low-cost airlines in the number of flights in Germany has quadrupled in the last six years. Environmental organizations criticize this development.

According to capacities worldwide

Airbus A321neo of Wizz Air at Frankfurt am Main Airport

According to the databases of Innovata LLC, which keeps statistics on the 800 most important airlines, the low-cost airlines are listed according to passenger capacity in the following order:

After departing from Germany

A ranking among the low-cost airlines operating in Germany was determined in the DLR and ADV Low Cost Monitor, which is published twice a year . The table compares the departures of a January week 2015 with a July week 2018. For domestic German routes, both directions of a route were taken into account. 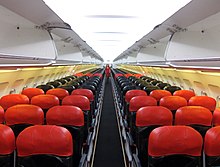 Conventional airlines can also meet some of these characteristics, for example because they take on cost-saving measures that are typical of low-cost airlines. Conversely, low-cost providers can refrain from parts of the no-frills concept. Therefore, it is not always possible to clearly classify an airline as a low-cost carrier. As a rule, low-cost airlines do not enter into alliances with other (low-cost) airlines. Some European companies were members of the now-defunct European Low Fares Airline Association , which common interests of its members represented .

In addition, cities and regions that are hoping for an economic upturn from flights subsidize the flights. These include, for example, the expansion of airports and infrastructure in general, cooperation in connection with tourist services and marketing campaigns, as well as discounts on security and terminal fees, handling fees and fuel prices.

The basic economic idea of ​​the low-cost airlines was to offer flights at prices that were well below those of conventional airlines. As a result, people could afford air travel who, although in principle demanded it, for whom the previously cheapest tariffs were still too expensive. The resulting increased demand is also known as the "Southwest Effect". In order to still be able to work profitably, the providers had to significantly reduce their costs compared to conventional providers. Today, in addition to the pure low-cost flight model, there are also various other business models in the low-cost flight segment. Established airlines, for example, set up low-cost subsidiaries in order to regain market share across the group, or they try to drastically reduce their costs themselves. Subsidized state airlines may also be able to enter the market for low-cost flights without having to reduce their costs.

In addition, different business models can merge into one group, as was the case with Air Berlin, for example . In addition to “cheap flights”, the company also offered charter and long-haul flights. There were also numerous transfer and feeder connections. Air Berlin therefore called itself a hybrid carrier .

An Airbus A320-200 from Eurowings at Cologne / Bonn Airport

Low-cost airlines mainly use narrow-body aircraft such as the Airbus A320 family or the Boeing 737 series due to their low purchase and maintenance costs . So z. B. Southwest Airlines exclusively Boeing 737 and Wizz Air exclusively aircraft of the Airbus A320 family. Narrow-body aircraft offer sufficient passenger capacity and can therefore be used flexibly. If one machine fails, another can easily be used instead. In addition, the average fleet age of low-cost airlines is usually low. The average age of Ryanair's aircraft is 5.5 years, while the fleet age at Lufthansa is 11.9 years.