The title of this article is ambiguous. Further meanings are listed under Gangway (disambiguation) .

Fallreep is a redirect to this article. See also: Company Fallreep .

Shore and folded stairway from an overseas ship

A gangway [ ɡæŋweɪ ] is an access bridge or access staircase for getting on or off a ship or aircraft .

The original form of the gangway was the fall reep , a lowered rope to reach higher hulls, more comfortable as a rope ladder . The current usage of this term refers to ropes as handholds at the access road and to an entrance opening in the ship's hull.

Gangway of the Schonerbrigg Greif (Stelling) 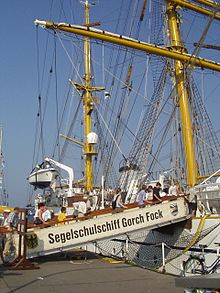 Gangway of the Gorch Fock

In shipping, a gangway is either a permanently connected component of the ship and can be folded out of the ship or possibly pushed out hydraulically or lowered from the deck or, similar to a bridge , it is a separate component. On old sailing ships, the gangway handrail was usually an elaborately decorated rope.

A gangway is also referred to as a “ shore leave ” (top picture) or (French) “passerelle”.

The gangway in aviation , in the passenger aviation and aircraft boarding stairs or passenger walkway mentioned is either firmly connected to a component of the aircraft, the laterally opening of the car door or pushed out of the rear of the aircraft, folded out and is expanded, or it is a mobile access staircase, which mounted on a chassis and is part of the airport infrastructure. Occasionally the latter is pushed manually to the fuselage, but more often it is pulled in by tractors or is permanently mounted on a motorized self-propelled gun.

Nowadays, mostly closed gangways , so-called passenger boarding bridges, are used at almost all large airports with modern check-in halls , which are permanently connected to the gate , but can be moved two or three-dimensionally and so can be brought up to the cabin doors of the aircraft. Air travelers can use this to get directly onto the aircraft and no longer enter the airfield during boarding . The first closed gangway was introduced by American Airlines in San Francisco in 1959 . 1st class passengers used the so-called "Jet Airwalk", while the 2nd class gangway was called the "Jetway". Since this type of boarding the aircraft is the most comfortable (for the passenger) and the most complex for the airport, airlines are billed accordingly. In order to save costs, low-cost airlines often do without it and use classic gangways.