Southwest Airlines is a US low-cost airline based in Dallas .

The successful Southwest Airlines concept was copied by some airlines, including a. by Ryanair and easyJet . But they are nowhere near the size or sales figures of Southwest.

Southwest Airlines was founded in March 1967 as Air Southwest Inc. by Herbert D. Kelleher and the Texan businessman Rollin King. Due to the strict regulation of domestic American air traffic by the US aviation authority and objections to the start of operations by the major US airlines ( American Airlines , United Airlines , Eastern Air Lines and Delta Airlines ), which dominated the domestic American market at the time, delayed the start of operations of the new airline by four years.

In March 1971, Air Southwest Inc. was renamed Southwest Airlines . On June 18, 1971, flight operations between Dallas, Houston and San Antonio were finally started with three Boeing 737-200s . Home airport has been Dallas Love Field in Dallas, Texas since 1971 . Until 1978 only cities within the state of Texas were served, from 1979 extensions to Louisiana , New Mexico , Oklahoma , Arizona , Nevada and California followed .

On March 12, 2008, the airline decommissioned 41 aircraft from its fleet. Southwest is accused of breaching security regulations. This was preceded by a fine of $ 10.2 million imposed on the company by the FAA for failing to check 46 machines for material fatigue as requested.

In the fall of 2010, Southwest took over the competitor AirTran for 1.4 billion US dollars. 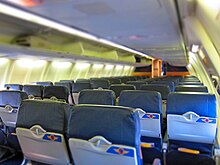 Passenger cabin of a Southwest Boeing 737-700

In late 2018, Southwest announced that it would offer flights between California and 4 airports in Hawaii . The ETOPS certification required for this is expected to be achieved in spring 2019, and several test flights to Kailua-Kona and Hilo have already been completed. Scheduled flights are to take place from April 2019.

As of May 2020, the Southwest Airlines fleet consists of 740 aircraft with an average age of 12.1 years: 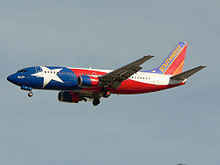 A Southwest Boeing 737-300 in the special livery "Lonestar One"

canyon blue, fuselage underside red, vertical stabilizer blue, red, orange with yellow lettering "SOUTHWEST", the entire fleet was repainted by the end of 2008, but three Boeing 737-700s (N711HK, N714CB and N792SW) continued to fly in the old colors to remind of the original Texas triangle cities of Dallas, Houston and San Antonio. This was also continued with the color variant from 2014-present.

Southwest Airlines announced a new design on September 8, 2014. The underside of the fuselage is blue, the tail fin (unbranded) yellow, red and blue. The name is in a modified font above the windows on the fuselage.

Several Southwest Airlines aircraft have been given special paintwork: 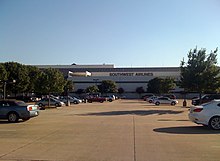 The headquarters of Southwest in Dallas 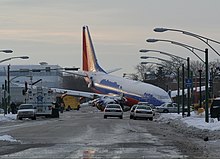 Companies in the Dow Jones Transportation Average (as of October 2017)