This article covers the US airline. For the German airline Delta Air, which existed between 1978 and 1992, see dba .

Delta Air Lines , or Delta for short in the brand identity , is an American airline based in Atlanta and a member of the SkyTeam airline alliance . It is one of the major carriers in the USA and is the world's second largest airline in terms of the number of aircraft . In 2010, Delta was also the world's largest airline with a passenger volume of 111.2 million passengers, but has been in second place in the world rankings in terms of passenger kilometers since the merger of United Airlines with Continental Airlines . Since 2014, after the merger of American Airlines with US Airways , Delta Air Lines is now only in second place. In addition to American Airlines and United Airlines, Delta is one of the only three remaining traditional scheduled airlines with an extensive route network in the USA, the so-called legacy carriers .

The airline's origins go back to 1924 when aircraft manufacturer Huff-Daland Aero Company founded a subsidiary called Huff Daland Dusters in Macon , Georgia , which used agricultural aircraft for pest control . The Huff Daland Dusters company relocated to Monroe , Louisiana in 1925 and opened a branch in Peru in 1927 , with entomologist Collett E. Woolman and pilot Harold Harris hired to manage it . The Peruvian Airways, headed by Harold Harris, emerged from the Peruvian branch on September 4, 1928, which later became Pan American-Grace Airways . At the same time, Collett E. Woolman traveled back to the USA and in November 1928, with the help of three private investors, acquired the parent company Huff Daland Dusters in Monroe, which was for sale and which was named Delta Air Service after the takeover on December 3, 1928 - a tribute to us the Mississippi Delta . Collett E. Woolman took over the management of the new company, which initially only remained active in the agricultural sector and on June 17, 1929 its passenger flight operations with three Travel Air S-6000B on the route from Dallas ( Texas ) via Shreveport and Monroe (both Louisiana) to Jackson, Mississippi . The current headquarters in Atlanta , the capital of Georgia, was moved in 1941 and the company name was changed to Delta Air Lines in 1945 .

In 1953 the airline Chicago and Southern Air Lines was taken over and the common route network was marketed as Delta C&S for two years. In 1959, the Douglas DC-8 was the first aircraft with a jet engine to join the fleet. On August 1, 1972, Delta took over Northeast Airlines to strengthen its position in the northeastern United States. Through the takeover, Delta received its first Boeing 727-200s .

In 1987, Delta was able to take over Western Airlines with its aviation hubs in Salt Lake City and Los Angeles , making it the fourth largest airline in the United States and fifth largest in the world. Shortly before Pan American World Airways went bankrupt in 1991, its transatlantic route network including part of the fleet and the Pan-Am terminal at John F. Kennedy International Airport were taken over for 1.3 billion US dollars .

Together with American Airlines , United Airlines , US Airways , Continental Airlines and Boeing , Delta Air Lines filed a lawsuit against the FBI and the CIA in response to the September 11, 2001 attacks. The aim was to clarify the question of whether the aviation industry is complicit in the terrorist attacks and / or whether its reactions were correct and appropriate.

The company cut more than 20,000 jobs between 2001 and 2004, and in the spring of 2004 the management made another 7,000 jobs available. Starting in the fall of 2004, Delta tried to avert an impending bankruptcy through a tough restructuring plan that provided savings of six billion US dollars by 2006 . In view of the high fuel prices and based on annual sales of around fifteen billion US dollars, the plan was described in press reports from the start as pure waste . In the summer of 2005, in view of rising fuel prices and other costs, Delta had to sell its subsidiary Atlantic Southeast Airlines to the regional airline SkyWest Airlines for $ 425 million in order to use the proceeds to pay off debts totaling $ 100 million.

In the second quarter of 2005, Delta was able to reduce the losses to 388 million US dollars - after almost two billion US dollars in the previous year. On September 14, 2005, Delta filed for Chapter 11 bankruptcy , which is possible under US law while operations are ongoing. Overall, the company said it had accumulated a mountain of debt of $ 20 billion.

The company was able to fend off a hostile takeover by the rival company US Airways , which was aimed at during the turn of the year 2006/2007 . On April 27, 2007, Delta Air Lines announced that it would leave bankruptcy protection on April 30. As of May 3, 2007, new shares were issued on the New York Stock Exchange and most of them were distributed to the creditors. The company's old shares became worthless at this point.

On April 14, 2008, Delta Air Lines and Northwest Airlines announced that they want to merge to form what is currently the largest airline in the world. The joint company is managed under the name Delta by the previous Delta boss Richard Anderson . The US antitrust authorities approved the merger on October 29, 2008, so that the merger was completed with effect from that date.

At the beginning of 2012 there was a slot swap between Delta Air Lines and US Airways . Delta Air Lines gave slots at Washington National Airport to US Airways and received LaGuardia slots in New York from US Airways. In 2012 it was also announced that Delta plans to significantly reduce the number of its regional aircraft with fewer than 50 seats. For this reason, the flight operations of the regional subsidiary Comair will also be discontinued. The remaining Comair aircraft will be integrated into the main line Delta Air Lines. Furthermore, as a replacement for the 50-seater 88  Boeing 717s are to be leased from Southwest Airlines , which will also be flown mainline.

On April 28, 2016, Delta Air Lines announced a firm order for 75 Airbus A220-100s and also secured options for 50 more aircraft of the same type. Delta becomes the largest operator of the A220. They are supposed to replace the 80 outdated Boeing 717s . In December 2016, however, all Boeing 787s ordered by Northwest Airlines in 2005 were canceled.

Delta owns 49% of Virgin Atlantic Airways , 4.1% of Aeroméxico , 3.6% of China Eastern and 2.9% of Gol Linhas Aéreas . According to press reports, Delta plans to increase its stake in Gol to 10% as soon as new shares are issued. This trade has already been approved by the relevant antitrust authorities. In November 2015, Delta announced that it would increase its stake in Aeroméxico to 49%.

Delta had a same-sex love scene and the word " lesbian " cut from the film Booksmart and references to gays in the biographical film Rocketman about Elton John for the screening on board . At the same time, Delta says it sponsors Gay Pride parades worldwide . "Apparently Pride is over at 9,000 meters," commented the Guardian .

Delta Air Lines serves many European destinations from the Atlanta hub and bases in New York-JFK and Detroit. The hubs in Tokyo-Narita and Amsterdam were taken over by Northwest Airlines . 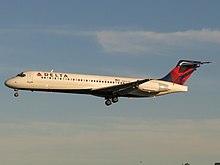 As of the beginning of June 2020, the Delta Air Lines fleet consists of 844 aircraft with an average age of 14.4 years:

Practically all Delta Air Lines aircraft are equipped with a system for wireless internet use on board via WLAN from the provider Gogo Inflight Internet , which means that internet use is possible almost worldwide for a fee even during the flight. The use of the WLAN exclusively for the services iMessage , Facebook Chat and WhatsApp is free of charge.

As of July 2013, several independent regional airlines and subsidiaries of Delta Air Lines operate an extensive network of regional and feeder flights under the umbrella brand Delta Connection .

In the course of its history, Delta Air Lines has used the following types of aircraft, among others: 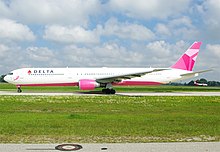 In memory of Evelyn Lauder and her commitment to education and prevention in the fight against cancer , was one you already dedicated Boeing 767-400ER in Pink painted.

Airlines from USA
Members of SkyTeam

Companies in the Dow Jones Transportation Average (as of October 2017)