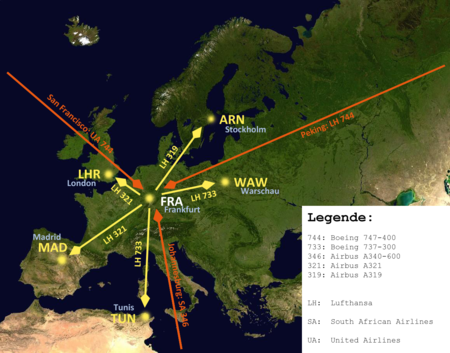 Schematic example of a hub and spoke system, here at Frankfurt Airport

Under a (aerospace) hub also English, hub ( hub called), is meant in the aviation industry generally a transfer hub of a carrier to switch between short, medium and long-haul flights. The following statements apply mutatis mutandis to air freight turnstiles.

In contrast to the term used to refer to all flight connections at an airport in the sense of an air traffic junction , the technical term hub ( hub ) refers to the route network of an airline. The aviation industry term hub is neither scientifically clearly defined nor standardized by law or international law. The meaning of the term is primarily shaped by the airlines operating. A turnstile is the planning result of a network planning of one or more airlines that cooperate with one another. Airports at which airlines have set up hubs are often also used by the airlines as home and / or fleet bases, where their aircraft is serviced.

In total, the following five criteria must be met in order to be able to speak of a "hub" at a commercial airport in the aviation industry sense:

If one of the above prerequisites is missing, then it is only a junction within the route network of an airline, in which different flight connections of the same airline meet without showing systematic transfer connections.

With the hub-and-spoke method ( hub-and-spoke method ) in air traffic, passengers and goods are first flown from their place of departure to the hub in order to transfer passengers and goods from there from numerous other directions (but with the same destination). to fly on to their actual destination. The use of the hub-and-spoke method leads to a high utilization (peak load) of the central traffic nodes and the aircraft. Hubs also help to ensure that large machines can be operated economically on long-haul flights (the larger the aircraft and the longer the flight route, the lower the proportional operating costs for transporting a passenger). At the same time, smaller regional airports are also connected to the global air transport network in this way. Accordingly, high capacity reserves are required at the central hub in terms of the infrastructure and ground handling services offered. Spread over the day, “masses of passengers” change in waves from smaller short or medium-haul aircraft to medium or long-haul aircraft and vice versa.

Boeing 737-300 Goslar at Frankfurt Airport, in the background a Boeing 777-200 from Lufthansa partner United Airlines

The hubs are used within various alliances to enable the transfer of flight passengers between the various airlines. This increases the number of destinations offered for an airline without having to operate the routes already served by partner companies with their own personnel and aircraft. This increased flexibility can also benefit small customer groups, whose transport on certain, less popular routes would otherwise not be profitable. Lufthansa no longer flies to the entire Australian continent itself, but shares the long-haul routes to and from Australia with its alliance partners, whereby the hub can be “halfway” (e.g. in Singapore or Bangkok) . Large airlines serve one to three (but sometimes more) of these hubs. Lufthansa is using the airports in Frankfurt am Main , Munich and, in the future, indirectly through its majority stakes in Swiss and Austrian Airlines, the airports in Zurich and Vienna as hubs. Examples of freight hubs in Germany are Cologne / Bonn Airport as the European hub for UPS Airlines and, since 2008, Leipzig / Halle Airport as the European hub for DHL .

There are different types of hub-and-spoke systems.

Every major IATA airline has at least one hub in its route network. This means that non- stop flights do not have to be carried out between all possible locations . This would not be profitable, as the aircraft are rarely or never so busy that procurement, use and maintenance are worthwhile. The flight load factor on individual main routes can be increased by “delivering” passengers and freight for a main route to the hub from various decentralized airports.

At international airports that are heavily frequented, some airlines gain an additional competitive advantage by using separate terminals with a hub function in order to further reduce the transfer time for their passengers with shorter walking distances, for example Air France at Paris-Charles-de-Gaulle airport .

Not least because of the sustained increase in scheduled air traffic and the associated congestion at some hubs, however, customer demand for non-stop flight connections is growing. The Boeing concept of medium-sized, comfortable long-haul jets ( Boeing 787 ) seeks to meet this customer need, while Airbus with the A380 is focusing more on mega-hubs which, for optimal utilization, are based on a large number of feeder flights “) Are instructed. However, with the A350 , Airbus also offers an aircraft for non-stop flights over long distances in competition with the 787.

The positioning as an important hub has major advantages because of the better flight connections:

With a hub, a city gains centrality in the world economic system through its better accessibility. This in turn has an impact on the choice of location when new companies, corporate headquarters and service providers are settled. And because of the large number of cheap flights, possibly also on the steering of tourism (e.g. Las Vegas ). The strategic positioning of the city of Dubai in the international economic system also relies on these mutually reinforcing concentration effects.

Berlin's lack of attractiveness for the location of important supraregional corporate headquarters, on the other hand, is not least associated (alongside other, above all historical factors) with its poor connection to international air traffic.

In the coming years, it will be particularly interesting to observe developments in the economic growth regions of Asia, where (at least in China and Vietnam) a mixture of state-controlled and economically indexed factors will create the new mega-hubs of the future in Hong Kong, Canton, Shanghai, Beijing , Taipei, Ho Chi Minh City and Hanoi, as well as, probably, in Mumbai, New Delhi, Bengaluru , Jakarta and other important economic and administrative centers. Old locations such as Singapore, Bangkok, Kuala Lumpur or Tokyo will have to assert themselves in the future against powerful competition from new international air traffic hubs with large domestic markets and thus high levels of attractiveness as intercontinental destinations with great potential for transfer.

Advantages of having multiple turnstiles

In addition to its most important location in Frankfurt, Lufthansa has been operating another hub in Munich since 1996 , originally because Frankfurt Airport had reached capacity at that time and the further expansion could only be implemented with delays. In the meantime, however, Munich has developed into an independent aviation hub that offers advantages even without the problems in Frankfurt.

The company Air France-KLM , created from the merger of Air France and KLM , continues to use both Amsterdam Airport Schiphol and Paris Charles de Gaulle Airport as hubs for the reasons mentioned above. Also the Zurich airport after the takeover of Swiss by Lufthansa reused Corporation as "Swiss hub".

In order to cover roughly the entire area of ​​the USA, it is more advantageous to serve at least one hub each on the east and west coasts, as the alternative of a single central hub in the Midwest (Chicago, Denver, Dallas or Minneapolis) would otherwise lead to detours too big and thus uninteresting for many passengers (e.g. for the Seattle - Los Angeles route).

Hubs are particularly important in large-scale countries with high domestic air traffic such as the USA. International air traffic at the two largest airports in the world, Atlanta and Chicago O'Hare , only accounts for ten to 15 percent of the total passenger volume. Much larger international hubs for US airlines have been set up at New York's John F. Kennedy Airport , which is much smaller than Atlanta and where international passengers make up 48 percent. The hub in Dubai at Dubai International Airport with the home airline Emirates is currently the most thoroughbred hub implementation in the world. While other large hubs are located at airports, which are also regular final destinations for air travelers, Dubai is actually just a transfer airport for most passengers. Accordingly, no other airline like Emirates has such a large fleet of particularly large, large-capacity, high-capacity aircraft, e.g. B. the Airbus A380 .