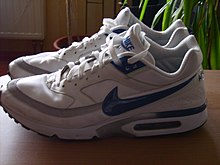 Nike Inc. ( English officially [ ˈnaɪki ], based on the Greek νίκη nike [ níːkɛː ], German 'victory' ; or " Nike, the goddess of victory ") is an internationally active US sporting goods manufacturer founded in 1964 and 1971 respectively . His company is based in Beaverton in the US state of Oregon . Nike has been the world's leading sporting goods supplier since 1989. Nike came mid-2018 to a market capitalization of 110.3 billion US dollars , making it one of the 100 most valuable companies in the world.

Bill Bowerman , the successful track coach at the University of Oregon in Eugene , founded in June 1964, together with Philip Knight , the company Blue Ribbon Sports . The company initially sold Onitsuka Tiger (today: Asics ) sports shoes , before starting in 1971, under the name Nike (name of the Greek goddess of victory ), producing shoes that were lighter and had more profiled soles than the usual US American shoes. In 1972 the first self-produced collection appeared.

Nike's commercial success was linked to loyalty to successful athletes. The company equipped Steve Prefontaine , who came fourth at the 1972 Summer Olympics in Munich over 5000 meters. He also made Nike shoes known to other runners. In 1978, Nike started selling shoes in Europe.

In 1984, Nike signed the then basketball player rookie Michael Jordan . Together they designed their own collections. In the first year of cooperation Nike generated 130 million US dollars with the brand Air Jordan . Overall, Jordan is said to have brought the company about 2.6 billion US dollars in sales.

In 1989, Nike achieved the leading position worldwide as a sporting goods supplier, which it still holds today.

In 1994 the soccer world champions from Brazil were "committed". In 1995, Nike took over the Canadian ice hockey supplier Canstar for 395 million US dollars, including the Bauer brand . 1996 saw the next coup after Michael Jordan with the then little-known golfer Tiger Woods . For five million US dollars a year, Nike became the outfitter for the future golf star. The professional cyclist and triathlete Lance Armstrong was later won over to the company.

In September 2003, Nike acquired the Converse brand for $ 305 million.

Knight resigned as director in 2004, and was succeeded by William D. Perez . In January 2006, Perez was replaced by Mark Parker .

With the campaign “Stand up, speak up!” (“Stand up, raise your voice!”), Nike has been campaigning against racism since February 2005 and advocating more tolerance and acceptance in European football stadiums.

In April 2008 the ice hockey division Nikebauer was sold to a group of investors from Kohlberg & Company and the Canadian businessman W. Graeme Roustan . The retail price was quoted at $ 200 million.

In addition, Nike has been the main sponsor of the NFL (the American professional league in American football ) since 2012 .

In 2015, Nike signed a lifelong advertising contract with an athlete, LeBron James, for the first time in its company's history .

The graphic design -Studentin Carolyn Davidson designed the for around $ 35 Logo , the so-called Swoosh . Today this “Nike hook” is one of the most famous trademarks in the world, as is the slogan Just do it . The two brand components are used either alone or in combination for branding.

When Nike was founded, it was initially just about manufacturing and selling sports shoes . The brand is still best known today for its various, mostly eye-catching shoe models; This range of shoes now includes popular sneakers and casual shoes and various running shoes in numerous colors and variations. As part of the project of organizing the first marathon run under 2 hours, NIKE has also changed the marathon running shoe in such a way that, thanks to a modified sole made of easily deformable thermoplastic and a thin, springy carbon plate in the sole, the running times can be increased by up to 4% can be improved. These Nike Vaporfly 4% or ZoomX Vaporfly Next% have proven in scientific tests to be so superior to other models and even spikes that they are now used by most top runners.

Over the years many more sporting goods have been added to the range. These items include: shorts , browbands and wristbands, hoodies and sweatshirts, jackets and vests, jerseys , running pants or gymnastic and training pants , t-shirts and polo shirts.

There are also numerous sports accessories , sports equipment and accessories from Nike. These include bags and rucksacks, hats and caps, tennis balls, basketballs and footballs, shin guards, socks, gloves, towels and watches.

With Nike +, the company entered the fitness tracker business and offered products such as the “Nike + Fuelband” fitness bracelet and various wearables . The company also released the “Nike + Running” smartphone app for iOS and Android , which can be used to record runs. In April 2014, Nike announced that it would stop developing its fitness bracelets. Existing products were supported until April 2018. In August 2016 the app was renamed “Nike + Run Club” and at the same time received a makeover, which triggered a lot of criticism. The Apple Watch Nike +, a collaboration between Apple and Nike , was released in October 2016 . Except for small differences, the smartwatch was a regular Apple Watch Series 2. For the Apple Watch Series 3, a new model appeared in collaboration between the two companies with the same name as its predecessor.

The company equips many athletes in various sports:

On May 6, 2017, the three long-distance runners Eliud Kipchoge , Lelisa Desisa and Zersenay Tadese started together for Nike on the Formula 1 circuit in Monza in an attempt to set the best time for the marathon with specific preparation and equipment - " Breaking2 ”roughly translates as“ crack the 2 [hours] ”. They failed with this project; Kipchoge was fastest, 25 seconds over the two-hour mark. The result is not considered a world record, as the rules of the IAAFn World Athletics Association for marathons were violated during the race . 18 pacemakers in 6 groups were repeatedly exchanged.

Niketown Berlin, one month before closing in 2013

In June 2012, the company began a new advertising concept with the Nike Barber Shop , a 1920s-style hair salon. The salons opened simultaneously in Buenos Aires , Milan , Madrid , Mexico City , Moscow and Paris . The Paris barber shop is in the Cremerie de Paris and is limited to one month - a promotional video with footballer Mario Balotelli was shot for this “pop-up shop” .

Abuses in factories and suppliers

While large sums of money flow into marketing budgets, wages in production are kept as low as possible at the same time.

Since the 1970s to the present day, Nike has been confronted with allegations by human rights organizations about the working conditions in its factories. According to a study, around 650,000 people worked in partner factories for Nike in 2005, mainly in Southeast Asia. In up to 50 percent of the establishments, access to toilets and drinking water was restricted during working hours. More than half of the 700 factories worked more than 60 hours a week, and every fourth factory was paid less than the minimum wage.

Among other things, the company is accused of exploitation, child labor and other abuses in supplier companies in the Black Book of Brand Companies . The US filmmaker Michael Moore also criticized the company in the documentary The Great Makers . Nike had previously outsourced a large part of its shoe production to Indonesia, some of which were made there by children for 19 US cents an hour wages.

In 2016, more than a million people in 565 factories in 42 countries were doing contract work for Nike. In most Asian countries, their wages are barely enough for a living. A report published in 2016 by the regulatory authority Worker Rights Consortium (WRC) on a Vietnamese Nike factory with around 8,500 employees once again revealed numerous irregularities. In addition to insufficient pay and forced overtime, pregnant women were systematically dismissed. Employees were insulted and exposed to high temperatures and toxic fumes. Sick people were not allowed to take time off, and access to toilets was restricted.

In November 2017, Nike is listed in the Paradise Papers publications . As the Süddeutsche Zeitung reported, Nike is a client of Appleby, which helps Nike to pay hardly any taxes in Germany. Nike has reportedly used a tax loophole in the Netherlands called the CV-BV structure.

Companies in the Dow Jones Industrial Average as of June 26, 2018