Kyrie Andrew Irving (born March 23, 1992 in Melbourne , Victoria ) is an Australian - American basketball player who has been under contract with the Brooklyn Nets in the NBA since the 2019/20 season .

Irving was drafted first by the Cleveland Cavaliers in the 2011 NBA Draft and was named Rookie of the Year award that same year . With the Cavs, he won his first NBA title in 2016 and was elected six times All-Star and once to the All-NBA team . As a player in Team USA , Irving also won the World Cup in Spain in 2014 and the gold medal at the Rio Olympics in 2016 .

Kyrie Irving was born to African American parents in Melbourne , Victoria , Australia . He is a citizen of the United States and Australia . His father Drederick played basketball at Boston University in the USA and later professionally in Australia. Irving's godfather is former NBA player Rod Strickland .

At the age of two, Kyrie Irving and his family returned to the United States, where they settled in West Orange , New Jersey . When Irving was four years old, his mother died, leaving his father to raise him and his two sisters by himself. At St. Patrick High School in New Jersey, Irving developed into a great basketball talent. 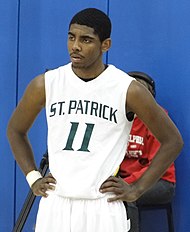 He participated in the prestigious games of the Nike Hoop Summit , McDonald All-American Game and Jordan Brand Classic . In the latter, he was named best player ( MVP ) together with Harrison Barnes . He also took part in the U18 American Basketball Championship in 2010 and won the gold medal with the USA. Irving was considered a future NBA player even before his first college game and was listed among the country's top 5 players on all scout lists.

Irving played in the 2010-11 season for Duke University under coach Mike Krzyzewski . Because of a toe injury on his right foot, he only played eleven games. With Duke he was eliminated from the NCAA Division I Basketball Championship tournament in the round of the best 16 teams ( Sweet Sixteen ) against the University of Arizona . Irving scored 28 points.

In his first and only year for the Blue Devils , he reached 17.5 points, 4.3 assists , 3.4 rebounds and 1.5 steals per use in eleven games . For this achievement he was named NCAA Freshman of the Year . 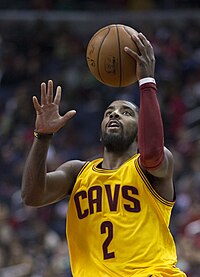 Irving was selected in the first place by the Cavaliers. A few minutes later, Tristan Thompson was chosen as another talent in fourth place.

On December 26, 2011, Irving completed his first game of the season for the Cavaliers. In the 96: 104 defeat against the Toronto Raptors , he had 6 points and 7 assists. Just two days later, Irving was able to contribute 14 points and 7 assists to the Cavaliers' first win of the season against the Detroit Pistons . On January 27, he achieved a new career record with 32 points in the loss to the New Jersey Nets .

At the NBA All-Star Weekend Rookie Challenge , Irving competed for Team Chuck . He led the team to victory with 34 points and won the MVP of the game.

During the 2012/13 season , Irving set a new career record with 41 points against the New York Knicks on December 15, 2012. He did the same with 5 steals on January 11, 2013 against the Denver Nuggets . This season he was elected NBA All-Star for the first time , and in the framework of the All-Star Game 2013 he also won the three-point competition . In 2014 he was named as a starter in the NBA All-Star Game . Irving was named MVP of the All-Star Game with 31 points and 14 assists in his East All-Stars victory over the West All-Stars .

On July 10, 2014, Irving renewed his contract with Cleveland, which promised him $ 90 million over five years. The Cavs strengthened over the summer with stars LeBron James and Kevin Love . On January 28, 2015, Irving set a new career record (55 points) in the Cavaliers' victory over the Portland Trail Blazers . He hit eleven three-point throws , which he set a new record for the Cavaliers. Irving was called up for the third time in the All-Star Game in the 2014-15 season . On March 12, 2015, Irving got 57 points with seven of seven converted throws from the three-point line when the Cavs won after extra time against the San Antonio Spurs . So Irving beat the team record set by LeBron James of 56 points on March 3, 2005. Irving reached the 2015 NBA final with the Cavaliers. However, he sustained a serious knee injury in the first final and was out for several months. Without Irving, the Cavaliers lost the final series to the Golden State Warriors 2-4 .

At the beginning of the 2015/16 season, Irving sat out due to his knee injury. He returned on December 20, 2015, scoring 12 points in 17 minutes in beating the Philadelphia 76ers on his season debut . That year was not voted into the All-Star selection. With the Cavaliers, however, he achieved the best record in the Eastern Conference at the end of the season , reached the NBA finals and won his first NBA championship alongside LeBron James. The following year, the Cavs reached the final again, where, however, as in 2015, they were subject to the Golden State Warriors.

On August 23, 2017, Irving moved to the Boston Celtics in exchange for Isaiah Thomas , Jae Crowder , Ante Žižić and a first round selection right for the 2018 draft .

Irving with the national team

On his debut for Boston on October 17, 2017 against the Cleveland Cavaliers, he scored 22 points and booked 10 assists. In his first eleven games for the Boston Celtics, he scored a total of 245 points. He came up with more points in the first eleven games than any player in the Celtics before. In March 2018, he had to undergo knee surgery, which meant that he not only missed the rest of the main round, but also the playoffs. On January 16, 2019, Irving achieved a new career high in this category with 18 assists against the Toronto Raptors .

In early July 2019, Irving announced his decision to join the Brooklyn Nets , as did Kevin Durant and DeAndre Jordan . According to media reports, Irving reached a four-year contract with Brooklyn.

Although Irving would have been eligible to play for Australia too , he decided early on to play for the United States . With the US selection, Irving became basketball world champion in September 2014 . In the final, the USA defeated the Serbian national team 129-92 , Irving was the best scorer of the game with 26 points. He was also voted Most Valuable Player of the Tournament ( MVP ).

On November 23, 2015, his first daughter, Azurie Elizabeth Irving, was born.

In February 2017, Irving announced his belief in a flat earth to the public . This statement was put into perspective shortly after by NBA commissioner Adam Silver by stating that Irving wanted to comment on fake news.

Since 2012, Pepsi has made a series of short films about a fictional person, Uncle Drew , played by Kyrie Irving. Uncle Drew is portrayed in the films as an older man who is laughed at by young people on streetball courts and then turned out to be a very good player. Other NBA basketball players also star in other films, including Nate Robinson , Kevin Love and WNBA player Maya Moore . In 2018, a feature film based on the Pepsi short films entitled Uncle Drew , in which Irving played the title role as well as Shaquille O'Neal , Nate Robinson, Reggie Miller and Lisa Leslie , was released.

Irving made a guest appearance on Karate Chaots .

NBA Executive of the Brooklyn Nets in the season 2019/20