The Toronto Raptors are a Canadian basketball team of the North American professional basketball league National Basketball Association (NBA) from Toronto in the province of Ontario . In the 2019 NBA Finals , the Raptors became the first Canadian team in NBA history to win the championship. The team was formed in 1995 as part of the NBA's expansion to Canada and has been the league's only Canadian franchise since the Vancouver Grizzlies relocated to Memphis , Tennessee for the 2001/02 season .

The Raptors belong to the Atlantic Division within the Eastern Conference . The Raptors have played their home games in the Scotiabank Arena since February 1999 , previously the SkyDome was their home ground . 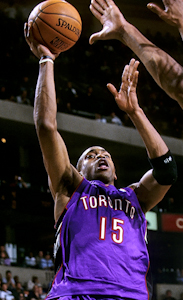 Point guard Kyle Lowry has played for the Raptors since 2012

On November 1, 1946, the Toronto Huskies were hosting the first league game of the Basketball Association of America when they faced the New York Knicks and lost 66:68. The Huskies missed the playoffs in their only season; after the end of the season the team was already dissolved. In the spring of 1993, the National Basketball Association considered expanding to Canada for the 1995/96 season , with Toronto and Vancouver being the most promising locations for expansion teams. The fee for placing an expansion team in Toronto amounted to 125 million US dollars . The nickname Raptors was chosen, this was influenced by the media hype of the commercially successful film Jurassic Park . Finally, in addition to the Vancouver Grizzlies, the Toronto Raptors were founded in the 1995 calendar year and integrated into the NBA for the 1995/96 season . The first head coach was Brendan Malone , who was previously employed by the Detroit Pistons in the position of assistant coach. Damon Stoudamire became the first player to be selected seventh by the Raptors in the 1995 NBA Draft . The squad for the new season was filled in via an expansion draft .

The team played their first NBA game on November 3, 1995 at home in the SkyDome against the New Jersey Nets . In front of a crowd of 33,306 visitors, the Raptors won 94:79. Alvin Robertson booked the first points ever for Toronto . The Raptors surprisingly defeated the Chicago Bulls in a home game on March 24, 1996 , who ended the season with 72 wins, 109: 108. The first season ended the team with 21 wins and 61 defeats in the last place of the Central Division . New professional Stoudamire was the most successful player of the Raptors with an average of 19 points per game and 9.3 assists and was named Rookie of the Year at the end of the season .

Over the next several years, the Raptors remained an unsuccessful franchise. Stoudamire was sold to the Portland Trail Blazers back in 1998 , and center talent Marcus Camby went to the New York Knicks that same summer. Clever NBA draft decisions gave 1997 the rights to Tracy McGrady , a year later, after a barter with the Golden State Warriors , the draft rights to Vince Carter . The team was also strengthened with veterans such as Charles Oakley , Antonio Davis and Dell Curry . Carter, who came into the league as a future superstar, was named Rookie of the Year in 1999 . The 1997/98 and 1998/99 seasons ended with only 15 and 16 wins, respectively. Around the talented duo Carter and McGrady, however, a good team emerged that led the Raptors in 2000 for the first time in the NBA playoffs, where they lost to the New York Knicks in the first round .

McGrady, however, left the Raptors in the summer of 2000 and joined the Orlando Magic . The sporting highlight for the Raptors was the 2000/01 season so far , when the team under Carter's leadership was eliminated only in the second round of the playoffs, after a series against the Philadelphia 76ers with Allen Iverson . The Raptors hold an inglorious record: 998 games in a row, since March 23, 2001, when Alvin Williams last succeeded, no player has been able to achieve a triple double . Ben Uzoh ended, in his last NBA game, on the last day of the 2011/12 season with 12 points, 11 rebounds and 12 assists on April 26, 2012 against the New Jersey Nets this series. With the Vancouver Grizzlies moving to Memphis in 2001, the Raptors remained the only Canadian team in the NBA. After reaching the playoffs in 2002, they clearly missed them in 2003. The five-time All-Star Carter was transferred to the New Jersey Nets in December 2004 against Alonzo Mourning , Eric Williams, Aaron Williams and two first-round draft picks , which started a fresh start for the Canadians. The new leader of the Raptors was Chris Bosh , whom they had drafted in fourth place in the 2003 NBA draft .

After the playoffs were clearly missed in 2004 and 2005, Bryan Colangelo was hired as the new general manager in 2006. This had previously formed the Phoenix Suns into a successful team. In the 2006 NBA draft , the Raptors decided on the Italian Andrea Bargnani , who was the first European to be selected in the first place in an NBA draft . In the 2006/07 season they won the Atlantic Division for the first time under the leadership of Chris Bosh, who had become All-Star for the second time in 2007. At this time Bosh was in the starting five of the All-Star Game for the first time and was able to book career highs in the season in both points and rebounds. The Raptors were eliminated despite this best in the first playoff round against the New Jersey Nets, as they had lost the series 4-2. Bosh reached the All-NBA Second Team, Bargnani the All-NBA Rookie First Team. In 2008 they reached the playoffs again, but lost again in the first round to the Orlando Magic . In the 2008/09 season All-Stars like Jermaine O'Neal and Shawn Marion were committed, but you could only get 33 wins and missed the playoffs significantly. In the 2009 NBA draft , DeMar DeRozan was selected in ninth place. Toronto improved its record to 40 wins, but narrowly missed the playoff qualification in 2010.

Due to the missed playoffs, star player Bosh moved as a free agent to the Miami Heat in the summer of 2010 and forms the new triumvirate there with Dwyane Wade and LeBron James . After the NBA Champion Dallas Mavericks confirmed it on June 21, 2011, assistant coach Dwane Casey (54) left the Texans to join the Toronto Raptors as head coach. At the Raptors, Dwane Casey succeeds the Canadian Jay Triano, who last missed the playoffs three times in a row with the Raptors and then became an advisor to the club. The Raptors, on the other hand, started a rebuilding and gathered young talents such as guard DeMar DeRozan , swingman Terrence Ross and the Lithuanian Jonas Valanciunas over the next few years . The former hope Bargnani could never meet the high expectations and was sold to the New York Knicks in the summer of 2013. Even the engagement of Rudy Gay did not bring the desired success, which is why he was sold on to the Sacramento Kings after a year. From 2013, Masai Ujiri took over the post of General Manager.

In 2012, point guard Kyle Lowry moved to the Raptors and helped the team to regain its shine. During the 2012/13 season , the Raptors reached fourth place in the Atlantic Division, missing the playoffs for the fifth time in a row. In 2013/2014 the Raptors made it to the playoffs after a weak start and were able to secure the championship of the Atlantic Division with 48 wins and 34 losses. Lou Williams was the first player in Raptors history to win the NBA Sixth Man of the Year Award for the league's best banker. In the first round, the team met the Brooklyn Nets . Against the Nets, the Raptors were eliminated after 7 games. In 2015, they won the Atlantic Division again and set a franchise record with 49 wins, and were eliminated in the playoff, as in the previous year, in the first round against the Washington Wizards 4-0. In summer 2015 the team was strengthened with Luis Scola and DeMarre Carroll . The NBA All-Star Game took place in Toronto for the first time in 2016 and the Raptors provided two All-Stars for the first time with Lowry and DeRozan. Toronto set a team record with 56 wins at the end of the season and finished second in the Eastern Conference behind the Cleveland Cavaliers . In the play-offs, the Raptors reached the conference finals for the first time after narrow series victories against the Indiana Pacers and Miami Heat . There you met the Cavaliers, who were eliminated 2: 4. The team finished the 2016/17 season with 51 wins, but failed in the conference semifinals against the Cleveland Cavaliers with 0: 4. The 2017/18 season went down as the most successful season in franchise history, as it was the first time that the regular season was the best-placed team in the East and 59 wins. After winning the first round against the Washington Wizards 4-2 without any major difficulties, the Cleveland Cavaliers again made sure that the Raptors were eliminated, although the team went into the series as a slight favorite due to the combination of strong individual players and a broad bench. Against the Cavaliers and the superbly playing LeBron James they lost 4-0 as in the previous year and head coach Dwane Casey was fired.

New beginning and first NBA championship with Kawhi Leonard (since 2018)

After another, early exit in the past season, the Toronto Raptors decided to start over. As the new head coach , the Canadians presented Nick Nurse , who previously worked as an assistant coach under Dwayne Casey at the Raptors. On July 18, 2018, long-time franchise player DeMar DeRozan and the Austrian center Jakob Pöltl were sent to the San Antonio Spurs in Texas in exchange for all-star Kawhi Leonard and shooting guard Danny Green . Leonard, whose contract expires at the end of the 2018/19 season, will continue to be the leader of the new Raptors franchise beyond the season.

In the 2019 NBA Finals, the Raptors decided the series against the Golden State Warriors 4-2 on June 13, 2019 and thus won the NBA Championship for the first time. 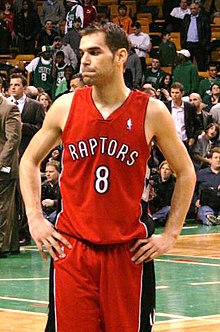 The Spaniard José Calderón played for the Toronto Raptors until 2013