The Portland Trail Blazers are a franchise of the North American professional basketball league NBA . The team originally played their home games at the Portland Memorial Coliseum ; since 1995 the games have been held at the Moda Center in Portland , Oregon .

The team has made it into the finals of the playoffs three times and won the Larry O'Brien Championship Trophy for winning the NBA championship so far (as of 2019) once in 1977. 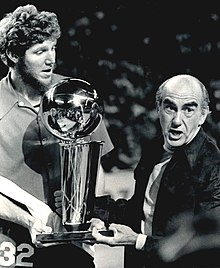 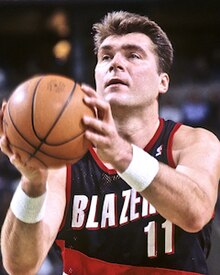 Center Arvydas Sabonis in the jersey of the Blazers

LaMarcus Aldridge played for the Blazers from 2006 to 2015

On February 6, 1970, the Trail Blazers were inducted into the NBA after paying $ 3.7 million for it. Originally the team name "Portland Pioneers" was intended, but since there were already teams in college sports that had the same name, an agreement was made on the current name. The original logo of the Blazers showed a pinwheel-shaped logo in which five black spiral lines from the top left merge into five red spiral lines at the bottom right: this symbolizes the sport of basketball with the competition between two five-person teams. In later versions the black lines became gray, but the basic principle remained.

The Blazers entered the NBA in 1970 with the Cleveland Cavaliers and the Buffalo Braves . The first years were marked by failure. The playoffs were regularly missed , despite young talents like Geoff Petrie and Sidney Wicks . In 1972 they got the first pick in the NBA draft and chose LaRue Martin , who never lived up to expectations.

In 1974, the Blazers received their first star player Bill Walton via the NBA draft . In 1976, ABA star Maurice Lucas and trainer Jack Ramsay joined the Blazers. Wicks and Petrie, on the other hand, left the Blazers. With the two newcomers and Bill Walton, the Blazers' upswing began, so that in 1977 the Blazers defeated the Philadelphia 76ers 4-2 in the final after Philadelphia had led 2-0 after two games. Only a few clubs have succeeded in turning a 0-2 deficit in an NBA final.

Waltons left the Blazers for the San Diego Clippers in 1978 after sustaining multiple injuries . In 1980, Lucas also left the team. In the 1983 draft, Clyde Drexler was selected in 14th place . This developed into one of the superstars of the 80s and regularly led the Blazers into the playoffs. The Blazers built a powerful team around him with players like Kevin Duckworth , Jerome Kersey , Terry Porter , Kiki Vandeweghe and Fat Lever . In 1984 the Blazers had the second draft pick, choosing Sam Bowie rather than Michael Jordan , whom the Chicago Bulls chose after them. This was later classified by many critics as the biggest mistake in the draft of all time. On the other hand, you chose in the 1986 NBA draft with the Lithuanian Arvydas Sabonis and the Croatian Dražen Petrović , the first European stars who later switched to the NBA.

In 1995 the Blazers left the old Portland Memorial Coliseum and from then on played in the new Rose Garden Arena (today: Moda Center). Drexler left the Blazers after eleven years and was sold to the Houston Rockets . Porter, Kersey, Buck Williams and Clifford Robinson also changed teams one after the other. Despite the rebuilding, the Blazers remained a constant playoff candidate. The Trail Blazers had one of the most talented teams around at the turn of the millennium and were close to the NBA title. In 1999 and 2000, Portland reached the Conference Finals, in which they failed at the San Antonio Spurs and Los Angeles Lakers , respectively . In the three following seasons, the Blazers were eliminated in the first play-off round. At the same time, various Portland players came into conflict with the law, which earned the team the dubious nickname Jailblazers . High achievers such as Rasheed Wallace , Isaiah Rider , Bonzi Wells and Damon Stoudamire , but also bank players such as Ruben Patterson or Qyntel Woods were involved. Half the team was then replaced several times. Between 2003 and 2008, the previously successful franchise never reached the playoffs.

In 2005 the Rose Garden Stadium went to some investment firms due to the bankruptcy of the Oregon Arena Corporation. In 2007 Paul Allen bought the stadium again after the then manager was fired.

In the 2006 NBA draft , the Blazers traded college stars LaMarcus Aldridge from the Chicago Bulls and Brandon Roy from the Minnesota Timberwolves . Both players quickly established themselves as key players in the rotation. Roy won the Rookie Of The Year award . Despite the increase in the balance sheet, the Trail Blazers missed the playoffs.

The Blazers won the 2007 NBA Draft Lottery . This gave them the first right in the annual talent selection. The choice fell on Greg Oden , who was considered one of the greatest center talents of the last ten years. However, Oden was injured before the start of the first game of the season and was out the entire season. The Blazers were able to compensate for the failure well. Through the performance increases of Roy, Aldridge, Travis Outlaw and Martell Webster , they were able to improve the balance again, but the Blazers failed just about the playoff qualification.

The team from Oregon started the new season with a lot of praise and praise. For the first time in five years they reached the playoffs, but they did not get past the first round. The 2009/10 season got off to a promising start for the Blazers, before Greg Oden broke his kneecap on December 5, 2009 and no longer returned to the field in the Blazers' jersey and was dismissed by them in 2012. In retrospect, the Blazers, as with Sam Bowie's election, were also criticized for choosing Oden, as Kevin Durant could have been taken. The Blazers reached the playoffs again, but had to do without Brandon Roy, who had previously suffered a serious injury to his right knee. Accordingly, the end followed in the first round.

To replace the injured Roy, the Blazers signed Wesley Matthews of the Utah Jazz . Despite the failure of Oden and the physically handicapped Roy, the Blazers were able to reach the playoffs again. This was mainly due to the explosions in performance of Aldridge and Matthews and the signing of Gerald Wallace . 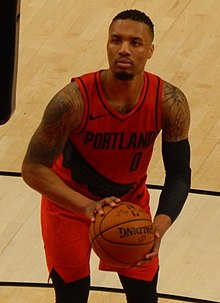 Point Guard Damian Lillard has played for the Blazers since 2012

In June 2011, the Blazers point guard Raymond Felton were able to commit from the Denver Nuggets . After a lockout in the NBA was ended in December, Brandon Roy announced his retirement from professional basketball due to persistent knee problems. The Blazers responded by hiring Jamal Crawford of the Atlanta Hawks . In mid-March 2012, Greg Oden was sacked and with him coach Nate McMillan . Caleb Canales took over McMillan's duties until further notice. They also split from Marcus Camby and Gerald Wallace. Hasheem Thabeet and Jonny Flynn from the Houston Rockets came for Camby and Mehmet Okur and Shawne Williams from the New Jersey Nets for Wallace . Williams and Okur didn't play a single game for the Blazers, however.

CJ McCollum has been with the Blazers since 2013

The Blazers did not reach the 2012 playoffs. In the summer of 2012, Raymond Felton and Jamal Crawford left the team. They strengthened themselves through the 2012 NBA draft with the lottery picks Damian Lillard and Meyers Leonard . The Blazers also committed the Europeans Victor Claver and Joel Freeland , whose rights they secured in the previous drafts. In August 2012, Terry Stotts was introduced as a new head coach. Compared to the previous season, the Trail Blazers achieved a significantly better record, but did not qualify for the playoffs in the 2012/13 season . Lillard was named Rookie of the Year for his performance , making it the fourth blazer to receive this award after Geoff Petrie , Sidney Wicks and Brandon Roy .

In the 2013/14 season , the Blazers managed to qualify for the playoffs again. They moved into the second round of the playoffs, where they were defeated by the eventual NBA champions San Antonio Spurs . With Lillard and Aldridge, two Blazers players were invited to the NBA All-Star Game . In the 2014/15 season they won the division title for the first time since 1999 and qualified for the playoffs, where they lost to the Memphis Grizzlies in the first round. After the season, star player Aldridge announced that he would join the San Antonio Spurs. Thus a rebuilding was initiated in Portland, in which the starters Robin Lopez , Wesley Matthews and Nicolas Batum also left the team.

The team strengthened itself in summer 2015 mainly with young players like Ed Davis , Al-Farouq Aminu and Maurice Harkless . Against all odds, the Blazers qualified for the 2016 playoffs with 44 wins . This was due, among other things, to the scoring backcourt from CJ McCollum , who was named the most improved player of the season and Lillard, who led the Blazers as scorer with over 25 points on average. In the first round of playoff, they surprisingly defeated the Los Angeles Clippers. In the next round followed against the champions Golden State Warriors after five games, the end. Also in the summer of 2016 they strengthened themselves with Evan Turner and Allen Crabbe , but this time the Blazers disappointed and only narrowly qualified, where they again lost to the Warriors 0-4 in the first round. In the 2017/18 NBA season , the Blazers achieved the third-best record in the Western Conference with a core of Lillard, McCollum and the Bosnian center Jusuf Nurkić . In the first round you had the home advantage against the New Orleans Pelicans , who competed without their star center DeMarcus cousins . Despite the favorite role of the Blazers, they were surprisingly eliminated with 0-4 against the Pelicans without a win. 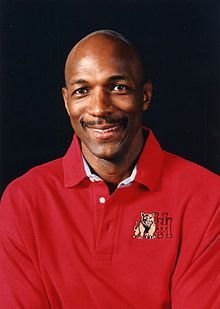