The Washington Wizards are a basketball - Franchise of the North American basketball league National Basketball Association (NBA). The team is based in Washington, DC and plays its home games at the Capital One Arena . 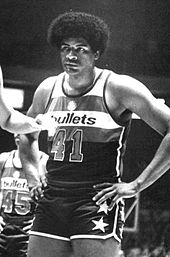 Gilbert Arenas in the jersey of the Wizards

Founded in 1961 under the name Chicago Packers , the club is originally from Chicago , Illinois. In its second season, the team coached by Jim Pollard played under the new name Chicago Zephyrs . In 1963, the company moved to Baltimore , Maryland and was renamed Baltimore Bullets . The name of the original Baltimore Bullets (1944–1954) was adopted. Initially, the team was unsuccessful, but was able to improve greatly with good draft picks and reached the play-offs for the first time in 1965.

In the 1967 and 1968 NBA drafts, important players were drafted with Earl Monroe and Wes Unseld . Therefore, the Bullets improved steadily and, after losing to the New York Knicks in the previous two years, reached the finals by beating them for the first time in history. But against the team from Milwaukee, the team lost 4-0 in games.

This was followed by the franchise's most successful period in the 1970s. A talented team was built around the two centers Wes Unseld and the newly signed Elvin Hayes after Earl Monroe left the club in 1971. In 1973 the franchise was renamed Capital Bullets , and a year later Washington Bullets .

After the team did not harmonize at first, the balance became steadily better. In the play-offs they were subject to the Knicks for three years in a row, but in 1975 the NBA finals could be reached after victories against Buffalo and Boston . However, the team lost the finals to the Golden State Warriors led by Rick Barry 4-0 in games, as before against Milwaukee. In the next two seasons, the Bullets stumbled a little and were eliminated early in the play-offs.

But in the 1977/78 season, the only NBA championship to date was won against the Seattle SuperSonics after seven games. The two teams met in the finals again next season, this time the Sonics won 4-1. After that, the Wizards never made the finals again to this day, but were one of the most enduring NBA teams in the 1980s. 22 years in a row (1967-1989) the team achieved at least 35 wins per season and reached the play-offs 18 times. But the team reached the second round of the play-offs only once in the 1980s. In 1988, the team was the last time for the next eight years in the play-offs. Faces during this era were Jeff Malone , Jeff Ruland, and Bernard King .

During the 1990s players like Chris Webber , Juwan Howard and Rod Strickland joined the team. Before the team was renamed in 1997, it was able to reach the play-offs again in 1997 for the first time in eight years. The last game in the play-off series, which was lost to the Chicago Bulls , also marked the end of an era that was ushered in by a change of ownership. The bullets (German: projectiles) became the wizards (German: magicians). This step was taken in view of the American homicide statistics, in which Washington, DC is always one of the first ranks. In addition, the Wizards no longer play their home games in the US Airways Arena, which is located in Landover, Maryland, but in the newly built Verizon Center in Washington, DC

From 2000 to 2003 Michael Jordan was co-owner and manager of the franchise and also played for the team himself. Nevertheless, there was no success. The Wizards never reached the playoffs during Jordan's season, although they had good players like Jerry Stackhouse or Larry Hughes on the team. Most of all, Jordan's leadership style was criticized as the manager of the team. So he chose the 2001 NBA draft , Kwame Brown without this could ever meet expectations in the first place out. Hopeful talents like Richard Hamilton were sold under Jordan.

After Jordan's resignation, the Wizards reached the play-offs four times from 2005 to 2008 with new players such as Antawn Jamison , Caron Butler and Gilbert Arenas . After a scandal surrounding star player Arenas, the team broke up and no more successes worth mentioning could be booked. The Wizards won only 19 games in the 2008/09 season . Therefore, the wizards were just in the process of rebuilding and were able to draft in the first place by winning the draft lottery point guard John Wall . On January 24, 2012, they fired their head coach, Flip Saunders, and named Randy Wittman as his successor. The season ended with a record of 20 wins and 46 losses. At 2012 NBA draft was chosen guard Bradley Beal from third. With 29 wins and 53 defeats in the 2012/13 season , the playoffs could not be reached again, although this was the best record since 2008. However, due to numerous injuries, the team had to do without top performers such as John Wall or Emeka Okafor for a long time .

For the 2013/2014 season, the team was changed in some key positions. Center Marcin Gortat was signed by the Phoenix Suns via Trade . In return, the injury-prone Emeka Okafor was handed in. The veterans Al Harrington and Eric Maynor were also committed to strengthen the squad across the board. The draft also brought rookies Otto Porter and Glen Rice Jr. to the Wizards. In the 2013/14 season , the Wizards succeeded in making the play-offs again with a record of 44 wins and 38 defeats. There the team failed in the 2nd round at the Indiana Pacers .

For the 2014/15 season they strengthened themselves with old star Paul Pierce and went into the new season with an almost unchanged squad. The Wizards reached the playoffs again with 46 wins. However, eliminated again in the 2nd round against the Atlanta Hawks . The 2015/16 season, the Wizards could not build on their previous season. Despite a balanced record of 41 wins and defeats, they missed the playoffs. Shortly afterwards, the Wizards separated from head coach Randy Wittman. 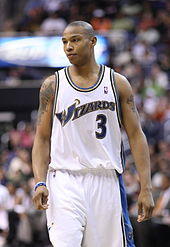 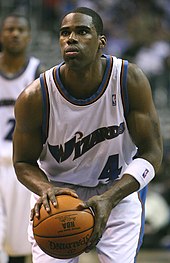