Paul Anthony Pierce (born October 13, 1977 in Oakland , California ), also known by the nickname "The Truth", is a retired American basketball player who was active in the NBA between 1998 and 2017 , most of it at the Boston Celtics. Pierce has been NBA All-Star ten times during his career and won a championship with the Celtics (2008). He is generally considered to be one of the best players in the club's history.

Pierce grew up in Inglewood , California and was the star of the Inglewood High School basketball team. Because of his remarkable style of play , he was invited to the McDonald's All-American Game , where he could compete with future NBA stars such as Kevin Garnett and Vince Carter .

In his college days, Pierce averaged 16.4 points and 6.3 rebounds per game in three years at the University of Kansas under Hall of Fame coach Roy Williams and was named MVP of the Big 12 Conference in both 1997 and 1998 Tournament chosen. 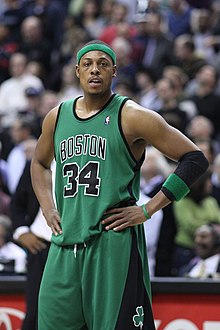 Pierce in the Boston Celtics jersey

Pierce was selected in the first round of the 1998 NBA draft in 10th place by the Boston Celtics . After his debut, he quickly became one of the best players in the Eastern Conference due to his ability to score points, get rebounds and numerous game-changing actions . Together with teammate Antoine Walker , he led the Celtics in 2002 for the first time in seven years in the play-offs and there until the Eastern Conference Finals. In the third game in this series, he led the Celtics to the biggest comeback win in the history of the NBA play-offs. He scored 19 of his total of 28 points in the fourth quarter and the Celtics were able to catch up a 21 point deficit and secure the victory. Pierce was one of the best scorers in the league during this time and averaged more than 25 points per game between 2000 and 2003 . 2005-06 it was even 26.8 points per game, but the Celtics did not reach the play-offs that year. That year he also achieved his career record with 50 points against the Cleveland Cavaliers .

In the 2006/07 NBA season , he had to sit out 35 games due to a stress fracture in his foot. The Celtics lost 18 games in a row this season and generally had one of the worst seasons in history with just 24 wins. After this brief unsuccessful period, the Celtics strengthened themselves before the 2007/08 season with the All-Stars Kevin Garnett and Ray Allen . Pierce improved a lot on the defensive this season, as he no longer had to carry the entire offensive alone. In May 2008 Pierce scored 41 points, the second most points in a Game 7 in the history of the Celtics, during a victory over the Cleveland Cavaliers in the Eastern Conference semifinals. On June 5, 2008, in the first game of the 2008 NBA Finals against the Los Angeles Lakers , Pierce "injured" himself in the third quarter and had to be brought off the field in a wheelchair. After a few minutes, however, he returned, scored 15 points in the third quarter alone and led his team to a 99:88 victory. Eleven years later, Pierce, in his role as a TV expert at the 2019 NBA Finals, admitted to having faked the injury as he had to use the bathroom due to an emergency. In doing so, he confirmed a persistent conspiracy theory among NBA fans. In six games, the Celtics beat the Lakers in the 2008 NBA Finals , winning their 17th NBA championship. Pierce was voted Most Valuable Player (MVP) in this series of finals.

The following season Pierce only had to miss one game and led the team on points. Because of a serious injury to Kevin Garnett , the Celtics had to say goodbye in the second round of the 2009 NBA playoffs. In the 2009/10 season Pierce took part in the three-point shootout as part of the NBA All-Star Weekend 2010 and was the first player in the Celtics since Larry Bird to prevail against his competition. With the Celtics he reached the NBA final again after 2008. Despite a 3-2 lead over the Los Angeles Lakers, the Celtics lost the last two games and thus the battle for the title. On November 3, 2010 Pierce scored the 20,000 point of his career in a game against the Milwaukee Bucks . In 2012, the Celtics reached the conference finals, but were narrowly defeated by the Miami Heat around superstar LeBron James . The following season , the Celtics had to do without star point guard Rajon Rondo , which is why they could barely qualify for the play-offs. Pierce could not play 34 minutes per game for the first time due to his age. Nevertheless, he was the top scorer of the Celtics with 18.6 points per game.

In Draftnight 2013 , Pierce was traded to the Brooklyn Nets along with Kevin Garnett and Jason Terry as part of the rebuilding of the Celtics . He is considered one of the best Celtics players of all time and is mentioned in the same breath as Bill Russell and Larry Bird . He left the Celtics as the second best scorer in the club's history, behind John Havlicek . 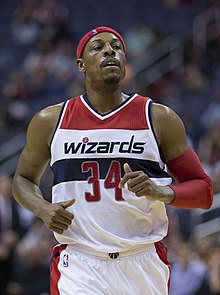 Pierce as a player in the wizards

The Nets presented with Pierce, Garnett, Joe Johnson , Brook Lopez and Deron Williams a starting lineup of former All-Stars. With these and coach Jason Kidd the championship should be brought to Brooklyn. However, the Nets failed because of expectations and were eliminated in the second play-off round. On April 11, 2014, Pierce exceeded the 25,000 point mark.

After a year in Brooklyn, Pierce left the Nets and signed with the Washington Wizards . Pierce started in all of his 73 games for the Wizards and scored 11.9 points on average. He also reached the second playoff round with the Wizards, where they were later subject to the Atlanta Hawks .

Pierce left the Wizards for the 2015/16 season and signed a three-year contract for $ 10 million with the Los Angeles Clippers . However, he only played two years in Los Angeles, where he played 93 games, including 25 in his senior year, and averaged 5.4 points. After the playoffs of the Clippers in the 2017 playoffs , Pierce's long career came to an end.

Pierce has converted the fourth most three-point throws and eighth most free throws of all NBA players. He is currently number 15 on the list of the most successful NBA points collectors .

Pierce was a member of the US national basketball team , which finished in a disappointing 6th place at the 2002 Basketball World Cup in their own country. Pierce averaged 19.8 points in nine games, making it the top scorer of the US team. He was also in the squad for the 2006 World Basketball Championship , but had to cancel due to an injury.

On September 25, 2000, Pierce was stabbed a total of eleven times in the face, neck and back at the Buzz Club in the Boston Theater District, and a bottle was smashed on his head. According to witnesses, he wanted to settle a dispute and got caught between the lines. Tony Battie , who was also under contract with the Celtics, saved Pierce by driving him to the nearest hospital as soon as possible. Pierce had to undergo emergency surgery to save his life. Despite this attack, he was able to play all games of the 2000/01 NBA season .