The small forward (Eng. "Wing player", literally "small attacking player"), in English also three or 3 , is one of five positions in basketball . It is part of the front court , which also includes Power Forward and Center . According to today's NBA standard, the small forward is usually 1.96 to 2.03 meters tall and therefore usually smaller than the power forward or center. 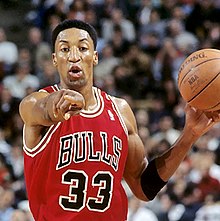 In addition to the classic small forward, there is a type of player who cannot be classified exactly as a small or power forward. They are unofficially referred to as combo forwards or tweeners (from English between two positions ).

Another variation is the point forwards (unofficial term). This is a small forward that takes on the role of a builder. The best known example of this is LeBron James .

The term "forward" comes from the time the sport of basketball was developed, when players - like in football - were divided into attackers (forwards) and defenders (guards). The forward is primarily responsible for scoring by pulling towards the basket. The division into small and power forward has only existed in this form since the 1970s. Previously, the two wingers were not distinguished, but were given similar tasks, although these were more like the field of tasks of today's small forward. Most NBA teams of the 1960s and earlier therefore typically had two very similar players on 3 and 4, such as the Philadelphia 76ers with Chet Walker and Billy Cunningham .