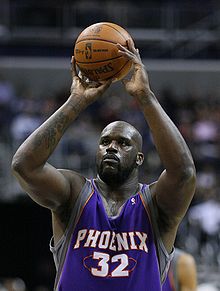 One of the most dominant centers of its time: Shaquille O'Neal

The Center (dt. Mid ), also in English Big man or Five or 5 , is one of five positions in basketball . He is part of the front court , which also includes the small forward and power forward positions . The center is usually the tallest and most physically strong player on a basketball team. Since traditional centers in the NBA were often around seven feet (2.13 meters) tall , they are also called 7-footers in English .

Tasks and style of play

The center's tasks are often limited to work in the zone, i.e. directly under the basket. Due to the proximity to the basket, the center tries to get rebounds - i.e. rebounds from the board or the ring - and to score easy points on the offensive. The center usually has his back to the basket and creates a good position by “posturing” - that is, pushing the opponent away with his own body. For this reason, centers are usually very bulky. Even on the defensive, the center is often directly under the basket. Due to his presence in the zone he prevents the pulling (of the opposing wing and set-up players ) to the basket.

The play style of the centers varies greatly between the North American professional league NBA and the European leagues that play according to FIBA rules. There the offensive tasks of a center are not limited to the zone, which would also be made considerably more difficult by the zone defense . Instead, European centers are more often characterized by a good throw feeling from a distance (up to the triple line). Numerous European centers that switched to the NBA therefore initially had problems changing their style of play to the NBA-typical center game. A center that also regularly takes distance throws is also referred to in English as stretch five , which literally means a center that “stretches the playing field” or “widens it”. 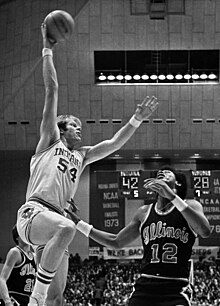 A hook throw - a typical throw at the center

Until 1936, according to the basketball rules, there was a jump ball at the center line after every basketball success . In order to regularly win the jump ball, big, powerful players were required - the beginning of the specialization of the centers. But great players were not only an advantage at the jump ball. Size was also useful in defense when blocking throws ( shot block ) or opponents ( screen or pick ), when picking and rolling , when rebounding , and when throwing in attack.

The first dominant centers were just under 1.80 m to 1.90 m tall (making them barely taller than today's point guards ). So was Ed Wachter , who is considered the best center-1910s, about 1.85 m tall. Moose Krause , the most offensively strong college center of the 1930s, measured only 1.90 m. Chris Leonard and Joe Lapchick , two Original Celtics centers in the 1930s and 1940s, were just over six feet. Tarzan Cooper of the New York Renaissance was just as great. At that time there were basically no centers over 2.00 m; People of this size were even considered unfit for basketball.

It wasn't until the early 1940s that a trend towards larger centers began. A large center proved useful in defense, which could catch a ball thrown by the opponent shortly before the basket. The players who practiced this particularly often included George Mikan and Bob Kurland . Both were just under 2.10 m tall, making them the first two real “big men” in basketball history. Because of these two players, goaltending was finally banned in 1944 . While Kurland never moved to the NBA, Mikan established the first championship dynasty with the Minneapolis Lakers when he won five of six NBA titles between 1949 and 1954.

In order to limit the dominance of the centers, and thus primarily the dominance of Mikans, the NBA widened the zone under the basket in 1951, in which a player may only stay for three seconds, from three to six meters. However, this did not have the desired effect.

Another advantage of very big players is that they can dunk the ball into the basket from above when attacking . To change this, it was proposed to increase the basket from 3.05 m (10 feet) to 3.65 m (12 feet) - plans that met with great opposition from the players and were therefore rejected again. In the NCAA , however, the dunk was banned for ten years (1967-76).

A good center remained the most important part of a basketball team. This was shown impressively by Bill Russell , who won eleven of a possible 13 championships with the Boston Celtics between 1957 and 1969 . At the same time, Wilt Chamberlain dominated the NBA in almost all statistical categories.

In the 1970s, Kareem Abdul-Jabbar and Willis Reed were among the dominant centers. Abdul-Jabbar is perfecting a litter that has been used successfully since the days of George Mikan - the " hook shoot". Bill Walton , another successful center of the 1970s, who, like Reed, was often handicapped by injury, acted for the first time as a kind of "second point guard" for his team by initiating plays with his passes.

In the late 1980s to the mid 1990s, the center position was unusually filled with numerous excellent players, from Hakeem Olajuwon to Patrick Ewing and David Robinson to Shaquille O'Neal . The Lithuanian Arvydas Sabonis also belongs in this row despite his susceptibility to injury. Since the late 1990s, however, this oversupply has decreased again. Shaquille O'Neal alone remained as the dominant center of the late 1990s and early 2000s ( Tim Duncan was mostly listed as a power forward ). His physical dominance under the baskets was so great (and his weakness in free throws so blatant) that opposing teams started to foul him as soon as he got possession of the ball. This tactic became known as Hack-a-Shaq .

In the meantime, some teams tried to run two centers instead of one. The Houston Rockets , who moved into the NBA final as a center duo with Ralph Sampson and Hakeem Olajuwon in 1986 , and the San Antonio Spurs , who won two championships in 1999 and 2003 with Tim Duncan and David Robinson, successfully tried this .

Tech-savvy centers became rarer in the NBA in the 2000s with the resignations of Robinson, Olajuwon, Ewing, and later O'Neal. The Chinese center Yao Ming , who was one of the best players in the league for a few years, ended his NBA career early due to injuries. The center generation from 2010 plays an important role as a defensive anchor. Players like DeAndre Jordan , Dwight Howard , Hassan Whiteside or Rudy Gobert are seen as offensively limited and not nearly as talented as the previous generations, but they play an important role thanks to their good defense. Some of the exceptions, which are also considered very versatile offensively, are the Spaniard Marc Gasol , Joel Embiid , DeMarcus Cousins and Karl-Anthony Towns , who are characterized by a good throwing range.