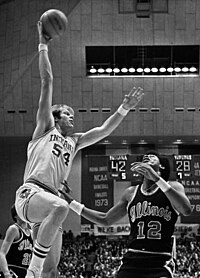 The Hookshot ( English Hook shot ) is a throwing technique in the sport of basketball .

The ball is thrown in an arching motion towards the basket with your arm stretched upwards. Due to the high drop point and the high flight curve, the hook throw is practically indefensible. It is mainly used by centers and power forwards , as it can only be used effectively from close range.

Hook throwing is a throwing technique known and used since the beginning of basketball.

The "Sky Hook" begins with a sequence of steps, in which the player jumps in an arc-shaped movement with the leg that is closer to the basket and uses the outer leg or knee to gain momentum. At the same time he fully extends his arm pointing away from the basket and throws the ball in a high arc towards the basket without folding his wrist. One advantage of the Sky Hook is that you protect your limb from the defending player through your body.

Eddy Curry on a jump hook .

Kareem Abdul-Jabbar is considered a real perfectionist of this technique , whose excellent and highly efficient hook casting was first referred to as "Sky Hook".

Similar to the Sky Hook, the “Baby Hook” begins with a sequence of steps and an arc-shaped movement. It only differs from the Sky Hook in that the thrower does not hold the wrist stiff when actually throwing, but throws the ball by folding down the wrist.

In the "Jump Hook", unlike the Sky and Baby Hook, the player jumps off with both legs and throws the ball, as in the Baby Hook, by folding down the wrist. The jump hook has a number of advantages, such as: B. that the thrower can execute the throw faster, and that by jumping he throws the ball at a much higher point.

The jump hook is the most widely used variant today, the best-known example being Shaquille O'Neal .