There is no German equivalent for the Anglicism dunking . In some magazines and books it is also translated as “stuff”. The English verb to dunk means something like to immerse , to dunk , to stick . 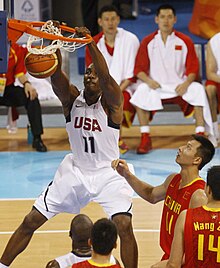 Instead of the normal throw, in which the ball is usually thrown below the height of the basket and falls in an arc through the ring, the player has to dunk the ball above the ring level and then push it down. The dunk is therefore one of the most effective throws in basketball, as the distance between the ball and the basket is practically zero. The player rarely "clogs" himself by, for example, pressing the basketball against the ring and the ring jumps back. For the defending team, dunking is a sign of poor defensive work because they allowed a throw from such a close distance. Dunking therefore has a psychological effect, as it cheers on your own team and intimidates the opposing team. The ideal case is a dunk that is stuffed into the basket over the outstretched arms of an opponent and at the same time provokes a throw foul, so that the opposing player gets a foul and the dunking player gets an additional free throw. These so-called "poster dunks" have a particularly strong effect.

Dunking is popular because it can be done in many variations, making it even more spectacular. These variations particularly include rotations in the air, such as 360 ° dunk ( English 360-degree dunk ) or the so-called "reverse dunk" , in which the player dots backwards. The windmill dunk refers to a dunk in which the ball is moved from bottom to top in a semicircle, like a rotor blade of a windmill , and then stuffed through the basket. In between-the-legs slam , which is difficult to perform , the player has to jump off at the right time after a long run-up, either “pass” the ball in the air under the left or right leg and then put it through the ring into the basket. Other dunkings such as the monster jam or the tomahawk involve guiding the ball behind the head and then stuffing it through the ring in one powerful movement. Other variants are, for example, turning one's own body 360 degrees before the player hangs on the basket, or using a jump point that is particularly far away from the basket, as is often observed with Michael Jordan , for example . A special type of game is the alley oop , in which the ball is caught while jumping and pushed directly into the basket.

Dunkings have a certain risk that if too much force is exerted on the basket, it will tear it out of its holder or even destroy the whole board to which it is attached. Darryl Dawkins has a dunking several times the Plexiglas ironing board of the basket system destroyed ( English backboard shattering ). Even Shaquille O'Neal has already managed to bring the whole basket system to collapse. However, these occurrences have recently become very rare due to the introduction and spread of more stable systems and spring-loaded baskets.

The term dunks flourished in the early decades of the game invented by James Naismith in 1891 , but did not refer to the concept of powerful closure associated with it today. Rather, all successful actions in the vicinity of the basket were sometimes referred to as dunk ( dip , dip ). It is not completely clear who sunk the first dunk in the modern sense.

Joe Fortenberry , who took part in the 1936 Olympic Games in Berlin with the US national basketball team, is one of the candidates . With a height of over two meters, he was one of the first players to dominate the game above the ring in a controlled manner. The attribution of the first dun in history resulted from the descriptions in the New York Times Report Arthur J. Dayley. At the beginning of March 1936 he observed athletes during a tournament that decided which team should be sent to Berlin. According to Michael McKnight, it is unlikely that Fortenberry actually sank the first dunk in basketball history that day; however, he did so in the presence of the correct observers who reported it:

“This new ' version of a layup shot ,' Daley wrote, ' left observers simply flabbergasted. Joe Fortenberry […] left the floor, reached up and pitched the ball downward into the hoop, much like a cafeteria customer dunking a roll in coffee. ”

Another aspirant is Bob Kurland . The two-time NCAA title holder describes the action that took place in 1944 as a coincidence ("unintentional accident").

It is also no coincidence that the first slam dunk contest held as part of the NBA All-Star Weekend was only held in 1984. In this phase of basketball, dunking was frowned upon and was z. B. construed as provocation in the National Basketball Association . In the NCAA college league , dunking was even explicitly banned from 1967 to 1976. At that time, spectacular dunks could only be seen in the small professional league American Basketball Association , in which athletic stars such as Julius Erving , Artis Gilmore or David Thompson could show their skills. The ABA held the first slam dunk contest in 1976, which was won by Erving: he showed one of the most famous dunkings in basketball history by stuffing the ball from the free throw line into the basket. When the ABA and NBA merged shortly afterwards, Erving, his teammate Darryl Dawkins, and new stars like Michael Jordan and Dominique Wilkins in the mid-1980s helped ensure that the Dunkings were finally accepted. Vince Carter achieved one of the most spectacular moments of the 2000 Olympic basketball tournament when he literally jumped over the 2.18 meter tall Frédéric Weis and dunk the basketball into the basket. Since the 2000s, it has also been observed that even relatively small point guards like Nate Robinson regularly dunk.

Dunkings are less common in women. Lisa Leslie made history on July 30, 2002 when she became the first WNBA player in history to dunk. On August 3, 2012, Australian Elizabeth Cambage threw the first dunking of a woman in the history of the Summer Olympics .

In the NBA , the Slam Dunk Contest was specially introduced, which takes place annually on the All-Star Weekend and in which four players of the current season are selected to perform the most spectacular dunking in front of the audience. Record winner is Nate Robinson with three titles (2006, 2009, 2010), Dominique Wilkins , Michael Jordan , Harold Miner , Jason Richardson and Zach LaVine won twice each . Usually two meter tall forwards or guards have the best chances, as they have the best combination of athleticism and body control, but height is not everything: Spud Webb , who is only 1.70 meters tall , won the Slam Dunk Contest in 1986, and Nate Robinson, who was just five centimeters taller, won it three times.