This article is about the basketball player. For other namesake see David Robinson (disambiguation) .

David Maurice Robinson (born August 6, 1965 in Key West , Florida ) is a retired American basketball player who played his entire professional career from 1989 to 2003 for the San Antonio Spurs in the NBA .

Robinson is a ten-time NBA All-Star , one-time NBA Most Valuable Player , two-time NBA champion and two-time Olympic gold medalist with the USA team . He was inducted into the Naismith Memorial Basketball Hall of Fame twice, in 2009 for his career in the NBA and in 2010 as a member of the Dream Team . Robinson is widely regarded as one of the best centers in basketball history.

Robinson only played a year of high school basketball at Osbourn Park in Manassas , Virginia . He attended the College of the Navy Academy until 1987 (hence his nickname "The Admiral"). He was a member of the US Olympic basketball team in Seoul in 1988 (bronze), in Barcelona in 1992 (gold) and in Atlanta in 1996 (gold). In addition, he played in 1987 at the Pan American Championships and the 1986 World Championships for the USA.

Robinson was chosen in 1987 by the San Antonio Spurs in first place in the NBA Draft , but was only used from the 1989/90 season , as he first wanted to complete his military training. He played for Spurs throughout his NBA career from 1989 to 2003. With this team he won the championship in the North American professional basketball league NBA in 1999 and 2003 . David Robinson has been named to the NBA All-Star Team ten times .

In the mid-1990s, the Admiral was undoubtedly one of the best basketball players in the world. In the 1993/94 season he had the highest points average of any NBA player, which he secured in the last game of the season on April 24, 1994 against the Los Angeles Clippers in a most impressive way by achieving his career high of 71 points (a value of even NBA legend Michael Jordan had never reached and was only outbid by Kobe Bryant with 81 in the 2005/06 season ). It was the highest point value for a single player since the 1977/78 season ( David Thompson , 73 points).

A year later in the 1994/95 season , Robinson made his Spurs the best team in the league and was therefore voted the NBA's Most Valuable Player . In the play-offs, the Spurs were then unhappy against the eventual champions from Houston .

However, he was only able to win an NBA championship with the support of Tim Duncan in 1999 . Since the Spurs now had two strong centers, the duo Robinson / Duncan was called the Twin Towers , based on the earlier twin towers of the Houston Rockets, Hakeem Olajuwon and Ralph Sampson . After winning the second championship ( 2002/03 ) David Robinson ended his active career on June 15, 2003.

On February 17, 1994, Robinson achieved something extraordinary. He was only the fourth player in NBA history to achieve double-digit values ​​in one game in four statistical categories (a so-called quadruple double ). Against the Detroit Pistons , he was able to record 35 points, 10 rebounds , 10 assists and 10 blocks . Previously, only Nate Thurmond (1974), Alvin Robertson (1986) and Hakeem Olajuwon (1990) achieved this little feat .

In 1996, David Robinson was named one of the 50 best NBA players of all time . In addition, he was named to the World Sports Humanitarian Hall of Fame in 1998. In 2001 Robinson was honored with the NBA Sportsmanship Award , in 2003 with the J. Walter Kennedy Citizenship Award . This year he received, along with Tim Duncan, by the magazine Sports Illustrated election as Sportsman of the Year .

David Robinson's number 50 jersey is no longer awarded at the San Antonio Spurs in recognition of his accomplishments. In a solemn ceremony on November 10, 2003 during the game against the Utah Jazz , the jersey with his number was hung under the ceiling of the SBC Center .

On April 15, 2008 it was announced that Robinson would be inducted into the US Olympic Hall of Fame on June 19 , a hall of fame for US Olympic athletes . The result of the vote, in which Robinson needed at least 18 of the 24 yes votes of the committee, was released on April 6th.

He was given an even greater honor in February 2009. He was announced as a finalist for 2009 Naismith Memorial Basketball Hall of Fame class election. Robinson was inducted into the Hall of Fame with Michael Jordan , John Stockton, and Jerry Sloan . The eulogy at the ceremonial induction ceremony held on 11 September 2009. Larry Brown and George Gervin , both also members of the Hall of Fame are. In 2013 he was also accepted into the FIBA Hall of Fame . 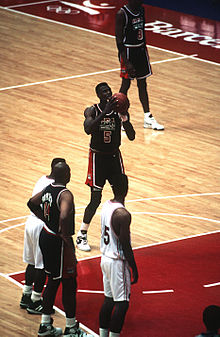 Robinson taking a free throw during the 1992 Barcelona Olympics

In the history of the San Antonio Spurs , he holds the records for converted (6,035) and attempted free throws (8,201). In the NBA's all-time leaderboards, Robinson is sixth in blocks, 17th in transformed free throws, 39th in points and 30th in rebounds. He only needed 44 NBA games in his first season to score more than 1,000 points and get 500 rebounds; this still means a franchise record today. In the 1993/94 season , he delivered most of the Spurs assists, which was unusual for a "Big Man" (4.8). Among the Big Man of the nineties, only Larry Bird , Charles Barkley and Chris Webber were more skilled.

In 1990/91 Robinson led the league in rebounding (13.0 rebounds per game), 1991/92 in blocks (average 4.49 blocks), and 1994/95 in average points scored (29.8 points per game). On the last day of the season, he scored 71 points against the Los Angeles Clippers and narrowly took the title from Shaquille O'Neal (29.3). Robinson and Kareem Abdul-Jabbar are the only players in NBA history to win all of these titles.

Robinson also leads the all-time best lists of the United States at the Olympic Games in career points (270), -Rebounds (124) and -blocks (34) on.

Together with his wife Valerie, Robinson has three sons. He holds a Bachelor's Degree in Mathematics from the Naval Academy and plays the saxophone. Robinson often donates large amounts to charitable causes. David and Valerie established the David Robinson Foundation in November 1992 .