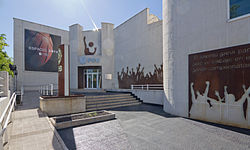 The FIBA Hall of Fame is the hall of fame of the Fédération Internationale de Basketball . The most outstanding basketball players , coaches , referees , sponsors and teams have been included in it since 2007 , whereby performance at FIBA ​​tournaments is primarily assessed.

The FIBA ​​Hall of Fame, whose idea came from the former Spanish basketball coach Pedro Ferrándiz , is located in Alcobendas , Spain , right next to the Pedro Ferrándiz Foundation , the largest basketball documentation archive outside the United States .