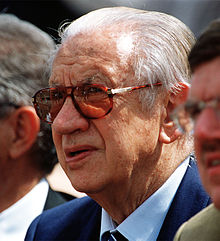 Samaranch became a member of the International Olympic Committee (IOC) and Minister of Sports under Francisco Franco in 1966 . On July 16, 1980, he succeeded Michael Morris, 3rd Baron Killanin, as the seventh President of the IOC . In 2001 he was succeeded in this position after 21 years by the Belgian Jacques Rogge .

Samaranch 2007 at the World Athletics Championships in Osaka

Samaranch came from a wealthy family who worked in the textile industry. He attended the German School in his hometown of Barcelona before studying business administration in Great Britain and the United States and also attending a management school.

He was a supporter of Francisco Franco and a member of his fascist party Movimiento Nacional . As an athlete, he did figure skating himself , as well as roller hockey , in which he first played for Espanyol Barcelona and was the Spanish national goalkeeper in the 1950s and later coached the Spanish national team. He also promoted roller hockey by organizing and financing the 1951 and 1954 World Championships in Barcelona. He was married since 1955 to Maria Teresia Salisachs Rowe, a friend of Franco's daughter Carmen. The couple had two children. His wife died in 2000.

Samaranch had been active in local and regional sport-political offices since 1955, before Franco appointed him Spanish State Secretary for Sport in 1966 and subsequently continued to promote him. Since 1967 he sat in the Spanish parliament, since 1973 he was president of the Catalan regional parliament in Barcelona and head of the provincial administration. During the transition in Spain there were protests against Samaranch and his role under the Franco dictatorship. During this transition period he became the Spanish ambassador in Moscow in 1977 .

Samaranch died of heart failure on April 21, 2010 at the age of 89 in Barcelona Quiron Hospital . His grave is in the Montjuïc cemetery in Barcelona.

Positions as a sports official

After the World War, Spain and Spanish sport were isolated due to their close ties to Hitler's Germany. This isolation was broken with Samaranch, as he succeeded in bringing the roller hockey World Cup to Barcelona in 1951, pre-financing it privately and winning it. The fact that he also made a substantial profit on the side, which he reinvested in sports, strengthened his position in Spanish sports. Samaranch became a member of the Spanish National Olympic Committee (NOK, Comité Olímpico Español ) in 1954 . At the Olympic Games in 1956, 1960 and 1964 he looked after the Spanish Olympic team as Chef de Mission. In 1966 he became a member of the IOC (for life), and from 1967 to 1971 he was president of the Spanish NOK.

Before the 1980 Summer Olympics in Moscow , Samaranch was elected IOC President. He won the votes of IOC members from Eastern Bloc countries through his rejection of the Olympic boycott of the USA and most of the Western countries. The chances of Willi Daumes , a competitor in the election, had been worsened by the non-participation of the West German Olympic team in Moscow.

During his presidency, the IOC abolished the amateur athlete regulation and admitted professionals to the competitions. He expanded the Olympic program, especially in women's sports, where the number of disciplines more than doubled from 50 to 120 in the 21 years. The introduction of the Paralympics also fell under Samaranch's presidency, as did the admission of the most important world association presidents to the IOC. In particular, however, the commercialization of the games and the financing of the IOC are considered an achievement of Samaranch, represented by the first private games in 1984 in Los Angeles . But Samaranch also promoted the establishment of an independent sports arbitration tribunal and an anti-doping agency as well as financial support to NOKs to enable all teams to participate in the Olympics. Due to its proximity to industry, Samaranch was the first to see that the athletes must represent the focus of the Olympic movement, as this is the only way to ensure the public's interest. He consciously placed himself in the tradition of Coubertin.

After the boycotts of Montréal , Moscow and Los Angeles , the Olympic Games were in a serious crisis that they were able to overcome with the help of Samaranch. The financing of the games had also become problematic: Montréal had become heavily in debt due to the excessive construction costs caused by strikes. The citizens of California and also those of Los Angeles decided in binding referendums that no tax money could be spent on the Olympic Games, so they had to be organized privately by entrepreneur Peter Ueberroth . The Moscow Games could only take place with government funding. By opting for consistent commercialization, the IOC made itself financially independent under Samaranch, the organization of the Games became significantly more interesting for the host cities, so that the Olympic Games were able to overcome their crisis at the time.

Samaranch (front, 2nd from right) in the GDR at the gymnastics and sports festival in Leipzig 1983

Critics accused Samaranch of having run the IOC in an autocratic and intolerant manner, and that corruption within the IOC had peaked during his tenure . The journalists Vyv Simson and Andrew Jennings caused a sensation with such sharp personal attacks on Samaranch in 1991, calling the IOC, among other things, "corrupt and anti-democratic". The "Samaranch system" was characterized as "ruling over a worldwide network of friendships, relationships, information, even dependencies."

The commercialization of the Olympic movement under Samaranch was also the subject of severe criticism. This included, among other things, that Samaranch, after the former IOC presidents did their work on a voluntary basis, received "a tax-free annual expense allowance of DM 1 million per year".

Samaranch's career under the Franco regime was picked up again and again. His ascent was based on access to Franco's family, which his wife, who was friends with Franco's daughter Carmen, gave him. Without understanding, he responded to the accusation “that he had worked with murderers” and said: “Thousands did that” and “that foreigners have no right to judge me, only the Spanish people”. In 1998 he emphasized: “I am proud of my present and past.” His involvement in Franco fascism justified the refusal of the Lausanne city ​​council in March 2001 to make Samaranch an honorary citizen. In 1994 the Nobel Committee rejected Samaranch's request to award the IOC the Nobel Peace Prize under his leadership . In the summer of 2009, the Democracy and Dignity in Sport (DDE) initiative called for Samaranch's resignation as IOC honorary president because of his role under Franco. Samaranch is said to have defended his support after Franco's death with the words:

"The mandate of Francisco Franco has meant the longest period of prosperity and peace that our country has known for many centuries."

"The government of Francisco Franco marked the longest period of prosperity and peace our country has seen in centuries."

The multiple changes in the age limit for IOC members, which Samaranch only made possible after his 21-year term in office, was also the subject of criticism. Towards the end of his IOC presidency, he had his son Juan Antonio Samaranch junior, the vice-president of the International Association of Pentathletes, admitted to the IOC. Samaranch's half-hearted anti-doping approach was also seen as a “major weak point in the balance sheet of his administration”.

The earlier suspicion that Samaranch had worked as a sports agent for the KGB since 1980 was corroborated by a Russian book publication in November 2009: Yuri Felschtinski reported in his book, which was translated at the end of 2009 under the German title The KGB puts matte translation, according to information from the former KGB -Leadership officer Vladimir Popov was said to have been supported by the Soviet secret service Samaranch in the 1980 IOC presidential election. Felschtinsky had already claimed this in early 2009 in his English-language book The Corporation: Russia and the KGB in the Age of President Putin . Accordingly, the KGB had put Samaranch under pressure at the end of the 1970s that, as ambassador in Moscow from 1977 to 1980, he had collected Russian antiques and brought them illegally out of the country.

“Samaranch was offered a choice: he could either be compromised through the publication of articles in the Soviet and foreign press detailing his activities, which would undoubtedly have put an end to his diplomatic career, or he could collaborate with the KGB as a secret agent . Samaranch chose the latter option. "

“Samaranch was given a choice: he could either be compromised by publishing articles in Soviet and international newspapers detailing what he had done, which would undoubtedly have ended his diplomatic career, or he could work with the KGB as a secret agent. Samaranch decided on the second option. "

- Yuri Felschtinski : The Corporation: Russia and the KGB in the Age of President Putin . 2009.

IOC communications director Mark Adams described the KGB allegations as "mere speculation". After Samaranch had used his influence in 2007 to award the 2014 Winter Olympics to Sochi in Russia , the Austrian daily Der Standard suspects that his exposure was made possible because he was dropped by the KGB successor, the FSB . It is considered likely that other agents are or were members of the IOC - in addition to the secret service activities of the South Korean Un Yong Kim , which are considered to be secured .

President of the International Olympic Committee