Pierre de Frédy, Baron de Coubertin (born January 1, 1863 in Paris , † September 2, 1937 in Geneva ) was a French educator , historian and sports official . Coubertin was instrumental in reviving the Olympic Games and founded the International Olympic Committee in 1894 , of which he was second president from 1896 to 1925. 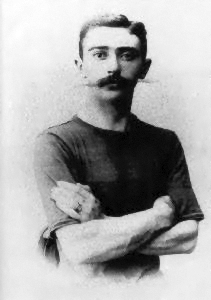 Coubertin was born near Versailles as the fourth child of Charles Louis de Frédy and Agathe-Gabrielle de Mirville . He came from a long-established noble family , which traces its roots back to the Roman de Fredis (and thus to the discoverer of the Laocoon group , Felice de Fredis).

He studied art, philology and law at the Sorbonne . He did not start the officer career that was intended for him, instead devoting himself to education . Study trips took him to Canada , the USA and England . There he came into contact with the ideas of Thomas Arnold . He finally came to the conviction that new paths were essential in upbringing and wanted to grasp and shape the whole person in the unity of body, mind and soul through sports training.

From 1880, influenced by the archaeological excavations in Olympia , Greece , he advocated a revival of the Olympic Games , with which he wanted to overcome national egoisms and contribute to peace and international understanding. The overcoming progress in the social field should be symbolized by a sporty pursuit of record according to the motto " Citius, altius, fortius " (Latin, in German: faster, higher, stronger). According to Coubertin's Olympic ideal, only adult, male lone fighters should take part, similar to the ancient model. In the long run, he could not enforce the exclusion of women from participating in the games. The Olympic Congress of 1914 in Paris decided, against Coubertin's declared will, that the Olympic medals of women should have the same value in the (then still official) national ranking as those of men.

Coubertin was general secretary of the French sports association Union des sociétés françaises de sports athlétiques . In this capacity he regularly had problems with the starts of his athletes in England, due to the different amateur regulations. When John Astley Cooper initiated the "Pan British Olympic Games" in 1891 and Astley Cooper committees were formed throughout the Empire, Coubertin anticipated him with international Olympic Games. In 1894 Coubertin founded the International Olympic Committee (IOC) and became General Secretary himself. In front of 60,000 spectators, the first modern Olympic Games opened on April 6, 1896 in Athens , in which 295 male athletes (exclusively amateurs ) from 13 nations took part.

In 1912 Coubertin became the first Olympic champion in the literature discipline under the pseudonym "Georges Hohrod and Martin Eschbach" with the work Ode to Sport . In 1913 he designed the Olympic rings , which became the symbol of the Olympic Games from 1920. From 1896 to 1925 Coubertin was President of the IOC . In 1915, after the outbreak of World War I , he moved the headquarters of the IOC and its archives to Lausanne , Switzerland, and thus to a neutral country that corresponded to his pacifist ideals. After joining the French army during the war, Godefroy de Blonay , a close confidante of Coubertin, temporarily took over his post from 1916 to 1919 . Coubertin was later named Honorary President of all Olympic Games for life.

In May 1936, Adolf Hitler gave Coubertin, who was in financial need, an honorary gift of RM 10,000 . When asked by a French journalist why he supported the Nazi Games , he replied that the most important thing was that they were celebrated in a grand way, regardless of whether they were used as a tourist advertisement for Southern California like in 1932 or as an advertisement for a political system like 1936 use.

In 1937 he became an honorary citizen of Lausanne. After his death, Coubertin's heart was buried in a memorial column built for him in Olympia.

President of the International Olympic Committee