Hakeem Abdul Olajuwon (born January 21, 1963 in Lagos , Nigeria as Akeem Abdul Olajuwon ) is a former Nigerian -American basketball player who was active in the North American professional league NBA from 1984 to 2002 . In the 1990s, the 2.13 meter tall center won two NBA championships with the Houston Rockets and a Most Valuable Player (MVP) award . Because he was exceptionally agile despite his height, he was nicknamed The Dream . In 2008, Olajuwon was inducted into the Naismith Memorial Basketball Hall of Fame. He is also on the list of the 50 best NBA players of all time .

Olajuwon grew up in Nigeria . His parents owned a cement business. He played a lot of hockey , handball and soccer at a young age . During adolescence he took as a goalkeeper at the Dallas Cup, an international youth football tournament in Dallas ( Texas ), part. At the age of 15, he decided to play basketball because he was already two meters tall. Olajuwon's talent quickly became apparent, and two years later he won the national championship in Nigeria with his school, the Muslim Teachers College . On the recommendation of his coach, Olajuwon planned to move to the United States to play at a university there. Olajuwon then contacted the University of Houston coach Guy Lewis, who subsequently offered him an athletic scholarship.

Olajuwon's jersey number 34 is no longer awarded by the University of Houston .

In Houston , Olajuwon formed a strong duo with Shooting Guard Clyde Drexler . They became known as Phi Slamma Jamma because of their fast style of play, which aimed at spectacular basket hits close to the basket, especially dunks . After they were eliminated in 1982 in the semifinals against the eventual champion, the UNC Tar Heels with James Worthy and Michael Jordan , they reached the final of the NCAA Division I Basketball Championship the following year , in which they were the big favorites against the surprise team Wolfpack of North Carolina State University by coach Jim Valvano . They lost the title in a legendary game in the final seconds against the team, known as the Cardiac Pack because of their narrow victories , through a game- winning dunk by Lorenzo Charles .

Drexler then announced his move to the NBA and Olajuwon also considered whether he should follow him. In the end, he decided to do another year at the university. During the summer break, Olajuwon often played in public gyms against players from the local professional team, the Houston Rockets. Olajuwon trained with the Center Moses Malone in particular for much of the summer of 1983.

In the 1983/84 college season, the Houston Cougars, although weakened by Drexler's departure, reached the NCAA final again. Opponents were the Georgetown Hoyas with their center Patrick Ewing . While Olajuwon and Ewing neutralized each other in the game, Ewing's teammates took command and won the game. After this second defeat, Olajuwon announced his move to the NBA. In the 1984 NBA Draft , the local Houston Rockets were allowed to vote first and decided on Olajuwon. Other players in this draft included Michael Jordan (# 3), Charles Barkley (# 5) and John Stockton (# 16), which makes him one of the strongest of all time.

With the 2.21 meter tall Ralph Sampson , Olajuwon formed a center duo that was called the Twin Towers in the NBA . In the 1985/86 season they defeated the reigning NBA champions, the Los Angeles Lakers with Magic Johnson , in the playoffs. In the finals, the Rockets lost to the Boston Celtics , who had a good front court with Larry Bird , Kevin McHale and Robert Parish , in six games.

In the 1986/87 season, the Rockets were considered one of the title candidates, but were weakened by the injury problems of Ralph Sampson. In the playoffs, the team lost in the second round to the Seattle SuperSonics after the sixth game, in which Olajuwon had played the best game of his career with 49 points and 25 rebounds .

Ralph Sampson was soon sold and Olajuwon stayed behind. In the playoffs of the 1987/88 season, the Rockets were defeated in the first round with 1: 3 games, although Hakeem Olajuwon posted 37.5 points and 16.8 rebounds per game. In the following years, the Rockets did not get beyond the first play-off round, despite Olajuwon's convincing performance. In the 1988/89 season he was the first player to score 200 blocks and 200 steals in one season. On March 20, 1990, he managed a so-called " quadruple double ", ie two-digit values ​​in four categories, when he marked 18 points, 16 rebounds, 11 blocks and 10 assists against the Milwaukee Bucks .

In the 1991/92 season, the Rockets missed the Playoff participation for the first time since 1984. At the same time, Olajuwon's contract ended and there was tension with Rockets team owner Les Alexander. Rumors of change were buzzing around, but Olajuwon and Alexander got back together after a clarifying conversation - Olajuwon extended the Rockets. His stats rose in almost every category the following season, with the Rockets going from 42 (1992) to 55 wins (1993). In the MVP election Olajuwon was defeated by Charles Barkley , and in the playoffs the team was defeated in game seven of the Western Conference semifinals by the Seattle SuperSonics and Gary Payton . 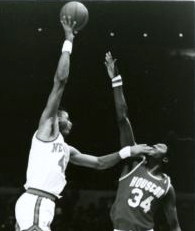 Olajuwon (right) during a block experiment, 1986

Olajuwon's performance increased again in 1993/94, he was voted MVP and the best defender of the season. The Rockets defeated the Portland Trail Blazers with Olajuwon's college teammate Clyde Drexler in the first round of playoff . In the Western Conference semifinals they were brought to the brink of defeat by last year's finalists, Charles Barkley's Phoenix Suns , after they had lost their first two home games. Houston fought its way back and reached the Conference Finals after winning "game seven". There the Utah Jazz were defeated in five games and the team moved into the NBA final.

Since Olajuwon's last participation in the final in 1986, the Rockets team had been completely rebuilt. Instead of Ralph Sampson, Rodney McCray and Robert Reid, Mario Ellie, Kenny Smith , but also talents like Robert Horry and Sam Cassell played alongside Olajuwons. So he was the only player left from that '86 team. Opponents in the final were the New York Knicks , where Patrick Ewing played. The final series was even, and after a defeat by the Knicks in "game six" there was a final "game seven" in Houston, which the Rockets ultimately won. Ten years after Olajuwon had been defeated by Ewing in the NCAA final, Olajuwon had now seized the chance for a rematch. Olajuwon was also named the MVP of the NBA Final. For Houston it was the first title in the club's history.

The following year the Rockets were defending champions, but played below expectations. In the middle of the season, Clyde Drexler was brought to Houston from Portland. The Rockets moved into the playoffs in sixth place, defeating the Utah Jazz and the Phoenix Suns . In the Conference Finals, the team defeated the San Antonio Spurs 4-2. In the final, the Rockets met the Orlando Magic , who with their young players like Shaquille O'Neal and Penny Hardaway had beaten the Chicago Bulls around Michael Jordan. After a close first game that the Magic lost, the Rockets were unstoppable. After three more victories, they were confirmed as NBA champions. The words of the coach, Rudy Tomjanovich , became famous after the game, "Don't ever underestimate the heart of a champion", pronounced in reference to the underdog role of the Rockets, who were actually defending champions.

The move into the final was not repeated in 1996, as the team lost 4-0 to the Seattle SuperSonics in the Conference semifinals. Olajuwon, now 33 years old, started mining. Although the Rockets reached the Western Conference finals again in 1997 thanks to the commitment of Charles Barkley, but then began the gradual decline. After two first round defeats in 1998 and 1999, the playoffs were missed in 2000. In 2001 Olajuwon was passed on to the Toronto Raptors , where he ended his career after a season. In the course of his career he has not reached any other player to date, reaching 3830 blocks. With 26946 points Olajuwon is ranked 11th in the NBA All-Time Statistics. 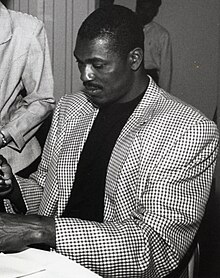 Olajuwon during an autograph session

Olajuwon is a devout Muslim who also kept the commandments of Ramadan during the NBA season . On April 9, 1991, he changed his first name Akeem to the conventional form Hakeem, to illustrate how seriously he took his religion. He has been a US citizen since April 1, 1993 and also took part in the 1996 Olympic Games for the USA . Olajuwon was named one of the Top 50 Players in NBA history in 1996 and inducted into the Naismith Memorial Basketball Hall of Fame in 2008.