Larry Joe Bird (born December 7, 1956 in West Baden Springs , Indiana ) is a retired American basketball player who was active in the NBA for the Boston Celtics from 1979 to 1992 .

Bird is considered an outstanding player of the 1980s. He won the NBA Most Valuable Player (MVP) Award three times (1984-86) and three NBA championships with the Celtics (1981, 1984 and 1986). As part of the US Dream Team , he won the gold medal at the 1992 Olympic Games . His nickname as a basketball player was "Larry Legend", alluding to his legendary style of play. In October 1998 Bird was inducted into the Naismith Memorial Basketball Hall of Fame as a player , a second time in 2010 with the Dream Team.

Bird during his college years

Larry Bird was born in rural Indiana, the fourth of six children to Joe and Georgia Bird. His hometown French Lick only had a population of 2,000. Driven and impressed by his two older brothers, he learned to play basketball. In 1970 he played his first season at Springs Valley High School in French Lick. Just an average player at first, he has improved tremendously over the years. In the basketball-mad state of Indiana, Bird became known far beyond the borders of his hometown. In his senior year of high school (1973/74) he scored 30 points and 17 rebounds per game and attracted the interest of numerous college basketball programs. As expected, Bird opted for a scholarship from the traditional Indiana University .

The jump to college was more problematic than expected for Bird. Shortly after enrolling at the University of Indiana, he left college and, after a brief study period, ended up at the Northwood Institute at Indiana State University . Bird immediately took over the lead, leading the Sycamores to the finals of the NCAA Division I Basketball Championship in his senior season . There he failed with his team at the Michigan State Spartans led by Magic Johnson .

Playing career in the NBA

Before the 1979/80 season, he moved to the Boston Celtics team in the NBA , which had drafted him in 1978 . Bird turned a long-suffering Celtics franchise into a championship contender within one season. The rookie Bird led his team to a 61: 21-balance and hit ultimately his rival Magic Johnson in the race for the NBA Rookie of the Year Award . However, it was Johnson who later led the Lakers to the title, dwarfing Bird's performance. Reinforced by Kevin McHale and Robert Parish , the Celtics won the NBA championship the following season. 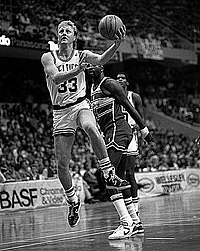 Bird was active his entire professional career for the Boston Celtics

Bird, meanwhile, had become the team leader and one of the best forwards in the NBA. Together with Magic Johnson, he initiated the revival of the NBA as a crowd puller for fans all over the world. The halls were filled with people who did not want to miss the performances of the unstoppable crunch-time player Larry Bird. Bird and Magic were now regarded as phenomena in the NBA, which was previously dominated by powerful power players.

With a height of 2.06 meters, Bird was one of the best long-range shooters of the era. Bird was almost bursting with self-confidence and announced 40-point games to his opponents before the start of the game. He developed into a top-notch defender, although he wasn't very quick on his feet. It was said of him that he could see moves before they even started. Bird was elected MVP for three seasons in a row, winning his number two and three championships with the Celtics in 1984 and 1986.

The 1985/86 season turned out to be the best of Bird's career and finally made him a living legend. He scored at least 20 points in each of the 14 games in February. This record was only set at the Celtics 30 years later by Isaiah Thomas . He became the MVP of the regular season and finals, won the NBA's first 3-point shootout and led the Celtics to a record of 67 wins from 15 losses. He was also honored with the Associated Press Athlete of the Year award . In the two following seasons he was able to defend the title of the 3-point shootout won. 1987/88 offered Bird as the first player in the history of the Celtics a 40-20 performance - he scored 42 points and 20 rebounds against the Indiana Pacers . 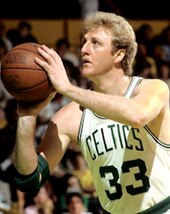 Bird during the 1985 NBA playoffs

The following season marked the beginning of the end of Larry Bird's career. He only played six times in the Celtics jersey and had to sit out a total of 59 games in the two following seasons due to injuries due to lumbar spine problems. The end of Bird's career was near, but the final highlight he took with the Dream Team at the 1992 Summer Olympics in Barcelona. The team dominated all of its games and won not only the gold medal, but also millions of fans worldwide. On August 18, 1992, he finally announced his retirement from active sport, his shirt number 33 was then not reassigned at the Celtics.

Bird enjoyed his life to the full in the years that followed, playing golf and taking things easy. But he quickly realized that he was bored with this life and that he longed for competition in the NBA. Therefore, in May 1997, he accepted an offer as head coach for the Pacers from his native Indiana. Right off the bat, Bird was named Coach of the Year and led the Pacers to the NBA Finals in the 1999/2000 season , where they finally failed at the Lakers. As a result, Bird ended his coaching career, as he announced before the season, and retired again.

Larry Bird has been the Pacers' sports director since July 2003. He won the NBA Executive of the Year Award in the 2011/12 season .

When a convicted robber was sentenced to 30 years in prison in 2005, the avowed Bird fan asked the judge, based on his idol's jersey number, to increase the sentence to 33 years. The request was granted.

In 1983 the video game One on One was released: Dr. J vs. Larry Bird , in which a one-on-one duel between Bird and “Dr. J “Julius Erving can deliver. Published by Electronic Arts , it was released for the Commodore 64 , Apple II , ColecoVision and other platforms. In 1988 the follow-up One on One: Jordan vs. Bird for the Commodore 64, Sega Mega Drive , PC and the NES .

NBA Coach of the Year Award