The ColecoVision is a game console from Coleco that was released in August 1982. Graphics and gamepad correspond roughly to the standard of arcade games of the time ; At the time of market launch, there were 12 software titles to choose from, which were sold in the form of modules . Over the years, the range has grown to almost 170 titles, including mainly implementations of slot machine games .

The ColecoVision was the first game console that could reproduce the arcade hits of the time almost true to the original with graphics and sound. This was due to the hardware similarity of the ColecoVision with the arcade technology of the time; on the Atari 2600 , Intellivision and Philips G7000 this was only possible with major compromises, not only graphically and sonically, but often also in gameplay and level structure. The steering wheel with pedals (turbo) offered for the ColecoVision was also a sensation at the time, a comparable version was not available for the home area until then.

View of the ColecoVision circuit board

The included controller ( joystick ) with spiral cable and an additional number pad found space in the housing and ideally was always tidy when not in use. Something similar already existed with the Intellivision console or the Interton VC 4000, and some first-generation TV video games ( Pong consoles with permanently installed games) already had this.

By Christmas 1982 Coleco had sold around 500,000 units. The success was due to the enclosed games. While Atari had made the breakthrough with the popularity of Space Invaders , the ColecoVision was the first home console on which the cult game Donkey Kong from Nintendo could be played. Another game hit was the game Zaxxon , which was very well ported from the arcade machine to the Coleco console.

Sales exceeded a million in early 1983 until the great video game market collapse in 1983 . The production of ColecoVision was stopped in the spring of 1984. Despite difficulties towards the end of its heyday, more than two million units were sold.

Today Coleco emulators and games are common on the Internet . Although these games are still subject to copyright law and are therefore illegal to distribute, many of the rights holders have so far refrained from asserting their claims. 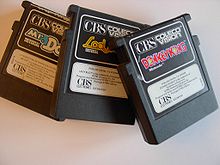 Below is a list of some popular games for the ColecoVision.