Michael Carter-Williams (born October 10, 1991 in Hamilton , Massachusetts ) is an American basketball player who plays in the NBA for Orlando Magic . 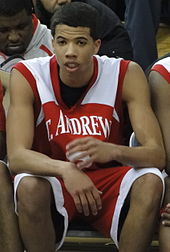 Carter-Williams in the Syracuse jersey

Carter-Williams played for Syracuse University for two years . While his freshman year was still inconspicuous with 2.7 points and 2.1 assists, he rose significantly as a sophomore . He finished his sophomore year with 12.1 points, 4.9 rebounds , 7.4 assists and 3.4 steals per game.

In the 2013 NBA Draft , Carter-Williams was selected in 11th place by the Philadelphia 76ers . On his NBA debut, Carter-Williams caused a sensation when he scored 22 points, 12 assists, 7 rebounds and 9 steals in beating the champions Miami Heat . So he just missed a triple-double . His nine steals are the highest value that a player has reached in his NBA debut in this category, the twelve assists are the second highest value in league history.

Carter-Williams was named Eastern Conference Player of the Week in his first week in the NBA (October 29 - November 3, 2013) . He became the second player in NBA history (alongside Shaquille O'Neal ) to do so in his debut week.

He was elected Eastern Conference Rookie of the Month for October / November 2013, January, March and April 2014. On December 3, he achieved his first triple-double in his career in the game against Orlando Magic (27 points, 12 rebounds, 10 assists). It was the first game in NBA history where two rookies could do it at the same time (the other was Orlando's Victor Oladipo ). On March 10, 2014, he managed his second triple double with 23 points, 13 rebounds and 10 assists in a loss to the New York Knicks .

Carter-Williams closed the season with 16.7 points, 6.3 assists and 6.2 rebounds per game. He was only the third rookie in league history, along with Magic Johnson and Oscar Robertson , with an average of 16 points, 6 rebounds and 6 assists. For these achievements he was named Rookie of the Year . He was also elected to the NBA All-Rookie Team .

In February 2015, Carter-Williams was transferred to the Milwaukee Bucks ahead of the transfer deadline .

On October 17, 2016, Carter-Williams was given to the Chicago Bulls in exchange for Tony Snell and made his debut on October 27 in the Bulls' 105-99 win over the Boston Celtics .

NBA Executive of the Orlando Magic in the season 2019/20