Andrew Christian Wiggins (born February 23, 1995 in Toronto , Ontario ) is a Canadian basketball player . He was first selected by the Cleveland Cavaliers in the 2014 NBA Draft and currently plays for the Golden State Warriors as Small Forward and Shooting Guard . After Anthony Bennett, Wiggins is only the second Canadian to be drafted first. Following the 2014/15 season , Wiggins was named NBA Rookie of the Year .

As a teenager, Wiggins attended Vaughan Secondary School in Vaughan for two years . In 2011 Wiggins moved to the United States and attended Huntington Prep School in Huntington , West Virginia .

In 2013, Wiggins scored 19 points for his team in the Jordan Brand Classic , the high school all-star game, and was together with Julius Randle the most successful shooter on his team.

On March 8, 2014, Wiggins scored 41 points against West Virginia . No freshman in the Big 12 Conference has achieved this since Michael Beasley in 2008 .

In his first college season he averaged 17.1 points per game, 5.9 rebounds with a three-way throw rate of 34.1%. Wiggins scored more points for the season than any freshman before him in the history of the University of Kansas. He was also among the 25 finalists for the John R. Wooden Award and the 10 semi-finalists for Naismith College Player of the Year. Both awards are given to the best college player of the season. 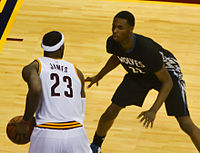 Wiggins in defense of LeBron James

On March 31, 2014, Wiggins announced his registration for the 2014 NBA Draft . In the run-up to the draft, Wiggins was identified with Joel Embiid and Jabari Parker as favorites for the first pick . On June 26, 2014, he was first selected by the Cleveland Cavaliers . A few weeks later, however, he was swapped with Anthony Bennett for Kevin Love to the Minnesota Timberwolves . This made him the first No. 1 pick since Chris Webber in 1993 to be transferred to another team before his first game.

Wiggins was immediately promoted to the starter of the Wolves and won the "Rookie of the Month" in the West every time from November to February. On January 31, 2015, he put down a career best with 33 points against the Cleveland Cavaliers. When Rising Stars Challenge 2015 Wiggins beat the team World the Team USA . Wiggins scored 22 points and was subsequently named the game's MVP . At the end of the season, Wiggins recorded 16.9 points, 4.6 rebounds and 2.1 assists and was named NBA Rookie of the Year . This makes him the second non-American to receive this honor after Pau Gasol .

In October 2017, Wiggins signed a $ 148 million, five-year contract with the Minnesota Timberwolves . Although the Wolves were able to qualify for the playoffs, Wiggins stagnated in his development.

In 2020 he was traded to the Golden State Warriors.

Wiggins took part in the 2010 U-17 World Basketball Championship and in 2012 the U-18 American Championships. In both tournaments, the Canadian team was able to achieve third place with Wiggins and thus win the bronze medal.

Wiggins made his debut at the American Basketball Championship in 2015 for the Canadian men's selection and won the bronze medal with the Canadians.

Wiggins grew up in a family of athletes. His American father Mitchell Wiggins also played in the NBA from 1983 to 1992 and later in Europe. His mother, Marita Payne-Wiggins, was a successful Canadian sprinter who won silver in the 4 x 100 meter relay at the 1984 Summer Olympics in Los Angeles . Andrew Wiggins also has two brothers and three sisters who are similarly talented athletes. His older brother Nick Wiggins played from 2016 in Macedonia for KK Rabotnički Skopje in the Prva Liga .