This article is about the American basketball player. For the alternative practitioner for psychotherapy, see Chris Paul (author) .

Christopher Emanuel "Chris" Paul (born May 6, 1985 in Lewisville , North Carolina ) is an American basketball player who is currently under contract with the Oklahoma City Thunder in the NBA . The 1.85 meter tall point guard played for the New Orleans Pelicans from 2005 to 2011 , and then spent six years with the Los Angeles Clippers .

With the US national team , he won the bronze medal at the World Championships in Japan in 2006 and the gold medal at the 2008 Olympic Games in Beijing and 2012 in London.

Chris Paul was in Lewisville in the US state of North Carolina born and attended West Forsyth High School in the neighboring town of Clemmons . He played for the high school basketball team and was awarded the "Mr. Basketball "from North Carolina in 2003 and an All-American nomination in 2005. Paul achieved his greatest achievement to date in the spring of 2003 when he scored 61 points in a high school game and dedicated every single point to his grandfather, who had recently been slain by two teenagers at the age of 61.

Paul attended Wake Forest University in North Carolina for two years . His stats at the university were: 15.1 points, 6.2 assists and 4.0 rebounds per game. In his freshman year, he was voted ACC Rookie of the Year. 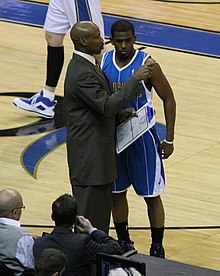 Paul was elected fourth in the 2005 NBA Draft by the New Orleans Hornets . Due to the devastation that Hurricane Katrina left in New Orleans , the Hornets had to move to Oklahoma City for all but three of their home games in the first season of Paul's NBA career . Paul made a name for himself in his first season with the most points (16.1), assists (7.8) and steals per game of all rookies. As a result, he was also voted NBA Rookie of the Year 2006. He was also elected to the 2006 NBA All-Rookie First Team .

Also in the following 2006/07 season , the Hornets had to complete their home games in Oklahoma City. Paul had to miss 18 games due to an injury, but managed to raise his points average to 17.3 points per game and his assists to 8.9 assists per game. He was invited as a sophomore to the Rookie Challenge 2007, where he recorded 17 assists and 9 steals, both rookie challenge records. The Hornets were not able to return to New Orleans until the following season.

Paul played his way up to one of the league's superstars with his 21.1 points, 11.6 assists and 2.71 steals per game. His cut in assists and steals was not beaten by anyone in the NBA season. This season he reached in the game against the Los Angeles Lakers on November 6, 2007 with 21 assists his previous career best. He was elected to the 2008 NBA All-Star Game, which was also held in New Orleans that season. He was able to put his stamp on the game with 16 points, 14 assists and 5 steals, but in the end the Western Conference All-Stars lost to their colleagues from the Eastern Conference. For the first time since the 2003/04 season , the Hornets were able to qualify for the NBA play-offs with 56 wins . In the election of Most Valuable Player of the Regular Season, Paul finished second behind Kobe Bryant . Paul was elected to the All-NBA First Team . In his play-off debut, Paul scored 35 points, 10 assists and 4 steals against the Dallas Mavericks . In his second game he set a Hornets team record with 17 assists and led his team to victory again. After five games, the Hornets went on to the second round, where they lost in seven games against the San Antonio Spurs . 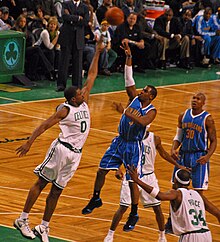 In the 2008/09 NBA season , Paul led the NBA again in assists and steals, while he was able to increase his points average to 22.8 points per game. He was re-elected to the NBA All-Star Game. On November 9, 2008, he broke Oscar Robertson's NBA record by creating a double-double in each of the first six games of the season . Just 38 days later, on December 17, 2008, he broke Alvin Robertson's 1986 NBA record with his 106th game in a row, in which he managed a steal . Paul was elected to the NBA All-Defensive First Team and the All-NBA Second Team.

The 2009/10 NBA season separated the Hornets from Coach Byron Scott and replaced him with the General Manager of the Hornets, Jeff Bower . Paul was severely injured this season and had to sit out for eight weeks. He was again elected to the NBA All-Star, but had to sit out due to injury in the game. He was third in the MVP election.

Also in 2010/11 the Hornets could not get into the play-offs for the deep run they had hoped for. The team around Paul failed in the first round at the Los Angeles Lakers . Paul was elected to the All-NBA Third Team for his achievements. 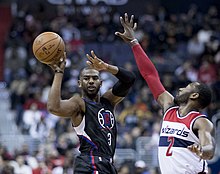 Paul in the Clippers jersey, defended by John Wall

After the " lockout " ended during the summer break, there were many rumors within the league that Paul would be leaving the Hornets. At first there was a planned deal between the Hornets and the Lakers from Los Angeles, but this exchange of players was not approved by the NBA, which is the current owner of the Hornets. Eventually Paul joined the Los Angeles Clippers . In return, the Hornets received Eric Gordon , Chris Kaman , Al-Farouq Aminu and a pick in the 2012 draft from the Minnesota Timberwolves . Paul played alongside Blake Griffin and DeAndre Jordan in Los Angeles . He won the MVP award for best player of the game at the 2013 NBA All-Star Game .

During the 2012/13 season , Paul turned down a contract extension with the Clippers and declared that he wanted to become a free agent. After the season, he signed a 5-year deal for a total of $ 107 million. For the next two years, Paul led the NBA in assists. With the Clippers he reached the playoffs in both 2014 and 2015, but the team was eliminated both times in the second playoff round.

In the summer of 2017, Paul was traded to the Houston Rockets by the Clippers . A few days earlier, Paul had announced that he would not have drawn his player option for an automatic, one-year contract extension, which would have meant that he would have been allowed to leave the Clippers as an unprotected free agent for no consideration . For the transfer, he pulled the player option and thus enabled the exchange to the Rockets. In return, the Clippers received Lou Williams , Patrick Beverley , Sam Dekker and Montrezl Harrell from the Rockets. Paul stayed with the Rockets for two years. He formed a strong backcourt with James Harden and helped the Rockets to two Conference Finals participation in which they were defeated by the Golden State Warriors . In the summer of 2018, he also signed a $ 160 million four-year contract with the Rockets.

In the summer of 2019, Paul was transferred to the Oklahoma City Thunder in exchange for Russell Westbrook .