Like his sister Tricia, who took part in the Olympic Games in Seoul (1988) for the US Virgin Islands , Duncan initially aspired to a career as a swimmer. When Hurricane Hugo destroyed the only large swimming pool on Saint Croix in September 1989 , training was moved to the open sea. The talented Duncan, afraid of sharks, then turned to basketball. Although he played exceptionally well, no college coach noticed Duncan on his remote island. Only Wake Forest University in North Carolina offered him a scholarship, and only because the then NBA player Chris King Duncan happened to see Duncan playing and told his old college coach about it.

From the beginning Duncan was able to convince with the Demon Deacons and was one of the best players in the relatively strong Atlantic Coast Conference . Duncan outclassed Maryland's Joe Smith , who was in the same year as Duncan and was selected first in the 1995 NBA Draft . Duncan, on the other hand, chose to stay in college. Also in 1996 , when he had the chance to be voted first in the draft ahead of Allen Iverson . That same year he was voted “Player of the Year” in the ACC, and also the following year. He is one of the few players who has won this award multiple times. Wake Forest withdrew jersey number 21 in Duncan's honor. He quit college as the best rebounder in NCAA history (that record wasn't broken until 2011 by Kenneth Faried ).

His graduation from college was set for 1997, and thus his participation in the 1997 NBA Draft . After winning the draft lottery, the San Antonio Spurs chose Duncan first. Since the Spurs already had a strong center with David Robinson , the duo Robinson / Duncan was called the Twin Towers (German: Zwillingstürme), based on the earlier Twin Towers of the Houston Rockets, Hakeem Olajuwon and Ralph Sampson .

Even in his first NBA season, Duncan set several records. For one, he was the first NBA player to receive every possible award for “Rookie of the Month”. On the other hand, he was elected to the All-NBA team after the season , the selection of the five best players in the league, which made him the youngest winner of this award at the age of 22 (this mark was later undercut by LeBron James ). Even in the MVP election, he got quite a few votes and ended up in fifth place.

In Duncan's second season, the 1998/99 NBA lockout fell . The season finally took place, albeit shortened to 50 games. In the playoffs, the Spurs defeated the Los Angeles Lakers and Portland Trail Blazers , each 4-0, before beating the New York Knicks 4-1 in the final . For the Spurs it was the first championship title in the club's history. As the second youngest player after Magic Johnson , Duncan was named MVP of the final series .

In the 1999/2000 season, the Spurs could not defend their title, but lost in the first round against the Phoenix Suns , also because Duncan was injured. In 2000 Duncan's contract with the Spurs ran out, after which he was hotly courted by numerous NBA teams. At the urging of David Robinson, however, he stayed with the Spurs. In the 2000/01 season, the Spurs lost 4-0 to the Lakers, who were 2001 NBA champions after an extraordinary run of 15-1 victories. In 2002 the Spurs lost again with Duncan against the Lakers, this time with 1: 4. However, Duncan was named the league's MVP for the first time this season, making him one of the youngest winners of this trophy (after Wilt Chamberlain and Wes Unseld ).

In the 2003 playoffs, the Spurs managed to beat the Lakers for the first time since 1999. After the Dallas Mavericks had beaten in the Conference final series, they defeated the New Jersey Nets to Jason Kidd with 2: 4. Again Duncan was named MVP of the season and the final series. In the decisive sixth game of the final series, Duncan scored almost a so-called " quadruple double " (two-digit values ​​in four statistical categories) with 21 points, 20 rebounds, 10 assists and 8 blocks and also set a record for blocks in a series of endings. Duncan's team-mate Robinson ended his career after this triumph, thus ending the era of the Texas “twin towers”. He and Duncan were both named Athlete of the Year 2003 by Sports Illustrated magazine for winning the title together .

As a replacement for Robinson, the Spurs brought the Slovenian Radoslav Nesterovič for the next season . In 2004 the Lakers, reinforced with Karl Malone and Gary Payton , took revenge. After a 4-2 win over Spurs, they moved into the final.

After the move from Shaquille O'Neal to Miami, the Lakers fell out as favorites in the West during the 2004/05 season and thus Duncan's Spurs were considered a candidate for the title. After relatively easy wins against the Seattle SuperSonics and Phoenix Suns, the Spurs moved into the final for the third time in six years. After seven games they had beaten the Detroit Pistons 4-3. Duncan was named the MVP of the final series for the third time. After record holder Michael Jordan (six times), Duncan is tied with Magic Johnson (three times), Shaquille O'Neal (three times) and LeBron James (three times) in this regard .

During the 2005-06 NBA season, Duncan suffered from heel spurs for most of the season , causing a drop in his performance. The Spurs reached the Western Conference semifinals and had to face Dirk Nowitzki's Dallas Mavericks . Duncan was superior to his opponent with 32.2 to 27.1 points per game, but when it was 3-3 after six games, Duncan became a tragic figure. Although he scored 39 points in the seventh and decisive game, he missed six of seven throws in extra time and the Spurs had to admit defeat to the Texan opponent. The following season, the Spurs were again among the favorites for the championship and made it to the playoffs again. In the first round they were able to prevail after five games against the Denver Nuggets , in the second round after six games against the Phoenix Suns and in the third round after five games against the Utah Jazz . In the final series, the Cleveland Cavaliers around superstar LeBron James were waiting for them, but the Spurs made short work of them. With four superior victories, the Spurs clearly prevailed and secured the championship. This time, for the first time, Duncan had to hand over the MVP title of the final series to another player, his teammate Tony Parker . Duncan described this as the best of the four championships he could win. His former teammate, Spurs legend David Robinson, called the four titles the "Tim Duncan era" and coach Gregg Popovich also praised Duncan.

Duncan throws over Andrew Bynum of the LA Lakers

In the 2007/08 NBA season, Duncan brought his usual performance of just under 20 points and 10 rebounds per game and led his team to 56 wins in 82 games. In the first round of the playoff they had to play again against the Suns , who had thrown the Spurs in three of the last four seasons in the finals from the race. This season, however, Phoenix had strengthened by signing Shaquille O'Neal, who was brought in specifically to lead the Suns through the playoffs. Already in the first game of the series Duncan was challenged and countered with 40 points and one of his rare three-point throws, which sent the game into the second overtime. In the end, the Spurs were able to win this game and later in the series. In the second round, the Spurs had major difficulties against the New Orleans Hornets and their leader Chris Paul , but were able to prevail after seven games. In the Western Conference Finals, however, it was over for San Antonio: The Los Angeles Lakers were simply too strong and prevailed against the Texans after five games. The following season Duncan started strong, but had to back off a little from the middle of the season due to injury. Despite these problems and the failure of Ginobili , the Spurs managed to qualify for the playoffs. In the first round they were kicked out of the race by the Mavericks after just five games . In 2009/10, Spurs got Richard Jefferson , Antonio McDyess , Theo Ratliff, DeJuan Blair and Keith Bogans. Despite his advancing age, Duncan was still good for 20 points and 10 rebounds per game and was selected on the starting line-up of the Western Conference team for the 2010 NBA All-Star Game. This year Duncan and his team prevailed in the first playoff round after six games against the Mavericks , but afterwards they had to admit defeat to the Suns after four games in the second round .

In the 2010/11 NBA season, the Spurs were able to win 42 of the first 50 games and thus had the sixth-best start to the season in the history of the NBA (after 50 games). In the 2012/13 season, the Spurs made it into the NBA finals again, but had to admit defeat in the decisive seventh game of the Miami Heat. This was Duncan's first career defeat in the final. 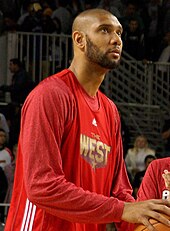 Duncan during the 2011 NBA All-Star Games

The 2013/14 season ended the Spurs with the best record of the NBA main round (62:20). After playoff successes over the Dallas Mavericks (4: 3), Portland Trail Blazers (4: 1) and Oklahoma City Thunder (4: 2), the Spurs reached the NBA finals for the sixth time in Duncan's career. There they met the defending champion, the Miami Heat. Unlike last year, the Spurs prevailed this time and Duncan was able to celebrate the fifth title win of his NBA career. After the season he was honored with the Twyman-Stokes Teammate of the Year Award as a flagship teammate.

In the 2014/15 season, however, Duncan retired with the Spurs in the first playoff round against the Los Angeles Clippers . After the playoff, his contract ran out and there was speculation that Duncan's career would end. However, he signed a two-year deal with the Spurs on July 9, 2015, which marked his 19th NBA season with the Texans.

With the Spurs' victory at Utah Jazz on April 5, 2016, Duncan achieved the 1,000th NBA main round victory of his career, becoming only the third player to succeed after Kareem Abdul-Jabbar (1074) and Robert Parish (1014). At the same time he had overtaken John Stockton (953) with the most wins for the same team.

In recognition of his achievements, Duncan's jersey number, 21, is no longer awarded by the Spurs. The jersey was hung under the ceiling after the NBA game against the New Orleans Pelicans on December 18, 2016. This makes him the eighth San Antonio Spurs player whose number is no longer assigned.

In July 2019, Duncan was hired by the San Antonio Spurs as an assistant coach and thus became a member of Gregg Popovich's staff. 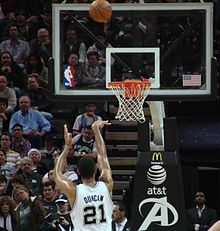 In each of his first 13 NBA years, Duncan was on both the All-NBA team and the All-Defensive team (sole record). He wasn't nearly as spectacular as, for example, Kobe Bryant or LeBron James , but knew how to convince with his superbly trained basics and his high level of game intelligence. His throw with board from the middle distance and his passing skills were particularly outstanding. Because of his very good basketball fundamentals, his long-time competitor Shaquille O'Neal gave him the nickname "The Big Fundamental". Tim Duncan is considered one of the best players in NBA history and by many experts and fans as the best power forward of all time.

His coach at Spurs, Gregg Popovich, once said of his protégé: “You never saw Timmy hit his chest like he was the first person to dunk a basketball like some other players do nowadays to do. He didn't point to the sky, he just played. We'd seen it for so long that it was almost commonplace. But it's so special that you have to remember it. "

With the San Antonio Spurs, Tim Duncan has always won at least 50 season games in his 18 seasons so far (except in the shortened 1998/99 season) and reached the play-offs every year.

Twyman-Stokes Teammate of the Year Award