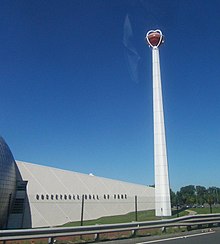 The Hall of Fame is located in Springfield , Massachusetts . It was inaugurated in 1959 and named after the Canadian doctor and educator James Naismith , who is considered to be the inventor of basketball.

The Naismith Memorial Basketball Hall of Fame is managed by a board of currently 24 members. The current chairman of the board is John L. Doleva (as of 2020).

The task of the board is to create public awareness of the sport of basketball and its history. At the administrative level, the Board of Directors monitors the operational business of the Hall of Fame as well as the selection process for future members. The selection process itself, however, is controlled by two examination boards.

A fully completed nomination application must be received by the CEO and President of the Hall of Fame by October 31. All candidates who meet the electoral requirements will be submitted to the appropriate examination boards. These candidates are usually announced on the anniversary of the historic launch of the basketball game on December 21st.

A total of two examination committees are convened by the Board of Directors of the Hall of Fame to make a selection of candidates each year, which are then presented to the so-called Honorary Committees of the Hall of Fame for final decision, on the one hand the North American Screening Committee with nine voting members and the other is the Women's Screening Committee with seven voting members. Both can name up to ten and up to four nominations and require at least seven and five votes from the respective committee.

The Board of Trustees then examines whether the nominees may have damaged the integrity of the basketball game. If not, the Administrative Committee submits the finalists to two honorary committees, North American and Women's. These finalists are usually announced during the NBA All-Star Weekend .

Finalists each require 18 out of 24 votes to be inducted into the Hall of Fame. If a finalist is not elected five times in a row, he receives a five-year ban. Members of these committees are not announced by the Hall of Fame. Traditionally, all committees work anonymously. They include merited Hall of Famers, officials, media representatives and experts.

In addition, there have been four direct election committees since 2011, each of which can choose one directly from all nominees. Their circle was expanded in 2019 to include a women's veterans committee. The committees are:

From 2011 to 2015, the American Basketball Association also had a direct election committee for players .

The Naismith Memorial Basketball Hall of Fame's final induction class will be announced on the weekend of the NCAA Final Four .