The Phoenix Suns are a professional basketball team from Phoenix ( Arizona ). You play as one of 30 teams in the National Basketball Association (NBA). The team colors are purple, orange, gray, white and black. They have played their home games in the Talking Stick Resort Arena since 1992 . Previously, the Arizona Veterans Memorial Coliseum had been the home of the Suns since 1968 .

The Suns was inducted into the NBA in 1968 together with the Milwaukee Bucks . Jerry Colangelo became the team's first manager. The Expansion Draft got Gail Goodrich and Dick Van Arsdale . Nevertheless, the first year ended with 16 wins and 66 defeats. In the 1969 NBA draft you had the opportunity to draft Lew Alcindor (later Karreem Abdul-Jabbar). However, you lost the coin toss against the equally weak Bucks, so that Alcindor was drafted by Milwaukee. Phoenix qualified for the playoffs in the second year. In 1971 and 1972 you could not qualify for the playoffs despite 48 and 49 wins respectively, and it was not until 1976 that the Suns were able to participate in the playoffs again.

Through well-known engagements such as Paul Westphal and rookie Alvan Adams , Phoenix was able to reach the NBA final for the first time in 1976. There they lost to the Boston Celtics 2: 4 after series. Adams was named Rookie of the Year for his performance . After having missed the playoffs again in 1977, eight consecutive qualifications followed from 1978 to 1985. In 1979 and 1984 they reached the conference finals. In addition to Adams, the stars of this period were Walter Davis and Larry Nance . A drug scandal rocked the Suns in the mid-80s, so that the team changed hands for a record sum of $ 44 million. The team did not succeed, so that the 1987/88 season only ended with 28 wins.

In 1988 Larry Nance was transferred to the Cleveland Cavaliers . In return, Guard Kevin Johnson moved to Phoenix. All-star forward Tom Chambers and rookie Dan Majerle were also signed . Jeff Hornacek established himself as a starter. Johnson and Chambers scored over 20 points per game and Phoenix finished the season again with 55 wins. In the playoffs they reached the conference final again, where they were eliminated 0: 4 against the Los Angeles Lakers . The success is repeated in 1990, but this time they were eliminated against the Portland Trail Blazers . Despite an all-star core consisting of Johnson, Chambers, Hornacek and Majerle, 1992 was already in the second round, again against the Blazers.

In the summer of 1992 Hornacek and two other players for Charles Barkley were transferred to the Philadelphia 76ers . Danny Ainge also moved to Phoenix. The former Suns player Westphal became the new coach. Led by Barkley, Phoenix achieved 62 wins, setting a team record. Barkley was awarded the MVP at the end of the season . Phoenix reached the NBA final for the second time in team history. There they were defeated by the Chicago Bulls 2-4 . The following year, the Suns lost 3-4 to the Houston Rockets in the second round. In the following years, the Suns were also regularly eliminated in the first or second round.

In 1995 Jerry Colangelo took over the position of manager. The creeping reconstruction began under him. He sent fan favorite Dan Majerle to the Cleveland Cavaliers. After disputes with Barkley, he traded him in 1996 to the Houston Rockets for Robert Horry , Sam Cassell and other players. In the 1996 NBA draft , Steve Nash was selected with the 15th pick, who left the team in 1998. Jason Kidd was signed by the Dallas Mavericks during the season . Horry was also exchanged for Cedric Ceballos to the Lakers. Despite a 0-13 false start, the Suns reached the playoffs in 1997. The playoffs were also reached in 1998 and 1999. In the 1999 NBA Draft , Shawn Marion was selected with the 9th pick. In 2000 Kevin Johnson resigned. The Suns signed Penny Hardaway from the Orlando Magic and hoped to successfully pair him with Kidd in the backcourt. However, due to injury, the duo rarely stood together on the field. Nevertheless, the playoffs were reached until 2002.

Reconstruction with Stoudemire and Marbury (2001-2004)

In 2001 the Suns transferred Kidd to the New Jersey Nets for Stephon Marbury . Under Marbury, however, the Suns could no longer book any successes. In the 2002 NBA Draft , the Suns chose Amar'e Stoudemire in 9th place. The playoffs were reached the following year. Stoudemire received the NBA Rookie of the Year Award . Shawn Marion also made a jump and became an All-Star for the first time. Before the 2003/04 season , Mike D'Antoni replaced Frank Johnson as the new coach. This gave Marbury to the New York Knicks in the middle of the season . The Suns played a poor season and in the end, due to many injuries, only managed to win 29 of the season.

In April 2004, the Phoenix Suns were bought by a group of investors around the tycoon Robert Sarver for 401 million US dollars. After missing the playoffs again in 2004, Marbury and Hardaway were transferred to the New York Knicks for Antonio McDyess . Steve Nash returned to Phoenix from the Dallas Mavericks. With the core of Nash, Marion, Stoudemire, Quentin Richardson and Joe Johnson , Phoenix achieved 62 wins. Nash was named MVP and D'Antoni was named Coach of the Year . You reached the conference finals, where you were defeated by the San Antonio Spurs . The following year Nash was again MVP and they reached the conference finals again, but lost to the Dallas Mavericks. Boris Diaw was voted Most Improved Player of the Season. In 2007 Steve Kerr took over the post of manager of Colangelo. The Suns remained one of the strongest teams in the Western Conference and the NBA. Especially point guard Steve Nash regularly led the team into the playoffs with his performances. Amar'e Stoudemire knew how to convince at his side. Marion stayed in Phoenix until February 2008 before he was transferred to the Miami Heat . In 2008, D'Antoni left the Suns and signed with the New York Knicks. First Terry Porter took over the post of coach, but was replaced by Alvin Gentry during the season . Despite 46 wins, the Suns did not reach the playoffs in 2009. In 2010 they reached the playoffs and moved into the conference finals, where they lost to the Lakers.

Steve Nash was twice MVP with the Suns

In the summer of 2010, Stoudemire left the Suns and joined the New York Knicks. In December 2013, Vince Carter and Marcin Gortat , among others, moved from Magic to Phoenix. While Carter left Phoenix after the season, Gortat developed into an important player. Nevertheless, Phoenix missed the playoffs in 2011 and 2012. In the summer of 2012, construction player Steve Nash left the club and moved to the Los Angeles Lakers . Goran Dragic, however, signed a contract with the Suns as Nash's successor.

The Unsuccessful Post-Nash Era Years (Since 2013)

The Suns finally slipped into the lower range of the Western Conference in the course of the 2012/13 season and after a series of defeats, head coach Alvin Gentry was separated in January 2013 after the Suns with a record of 13 wins and 28 losses on the last place in the conference. Successor was initially as interim trainer Lindsey Hunter . But under Hunter there was no sustained sporting success and the Suns finished the season in last place in the Western Conference with 25 wins and 57 losses.

For the 2013/2014 season, Jeff Hornacek, a former Suns player, became the new head coach. Hornacek previously worked for Utah Jazz as an assistant coach. He received a contract in Phoenix until 2016 and should lead the Suns back into the playoffs area. In the 2013 NBA draft , Ukrainian Alex Len was selected in fifth place. Seasoned key players such as Marcin Gortat , Luis Scola and Jared Dudley were also sold. Instead, they strengthened themselves with young star Eric Bledsoe , who came from the Los Angeles Clippers , and Gerald Green . 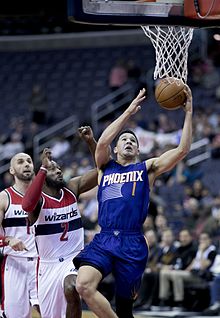 Top scorer Devin Booker has played for the Suns since 2015

Despite a bad forecast, the Suns surprised many fans and experts and only narrowly failed to achieve a playoff placement with 48 wins this season. Goran Dragić was voted Most Improved Player of the Season for his performance . Trainer Hornacek came in second in the election for NBA Coach of the Year . The 2014/15 NBA season was started with high hopes. The Suns signed Isaiah Thomas , who was supposed to provide a dangerous backcourt with Dragić and Bledsoe. But the experiment didn't work and Dragić was traded to the Miami Heat for Brandon Knight , Thomas was sold to the Celtics. The Suns again missed the playoffs with 39 wins. Tyson Chandler moved to Phoenix over the summer of 2015 . Devin Booker came over the draft . With the new core consisting of Chandler, Knight, Bledsoe and Morris, another attack on the playoffs should be taken. But the Suns struggled with injury problems. After only 14 wins after 49 games, coach Hornacek was relieved of his position. He was succeeded by former assistant coach Earl Watson . The season ended with just 23 wins and missed the playoffs for the sixth time in a row.

In the subsequent draft, the Suns voted again in the lottery. The Croatian talent Dragan Bender was selected in fourth place, the rights to Marquese Chriss , who was selected by Kings in 8th place, and Tyler Ulis in the 2nd round in 34th place were selected. In addition, two experienced players, Jared Dudley and Leandro Barbosa, were brought back to Phoenix. Both audience favorites have already had one and even two jobs with the Suns. The team only improved marginally in the 2016/17 season , with Devin Booker in particular shining as a scorer and breaking some internal team records. For the young Suns it wasn't enough for the playoffs, so Josh Jackson was selected in fourth place in the 2017 NBA draft . At the start of the 2017/18 season , coach Watson was sacked after three defeats in a row. Jay Triano took over his post . The playoffs were again missed with just 21 wins and 61 defeats for the eighth time in a row. On May 2, 2018, the new head coach, Igor Kokoškov, was introduced. In the subsequent NBA draft 2018 , the Suns received the first pick in a draft for the first time, choosing DeAndre Ayton from the local University of Arizona in first place. In addition, a trade gave the rights to Mikal Bridges , which was selected in 10th place. It was decided to draft Elie Okobo in 31st position and George King in 59th position. Furthermore, in a trade with the Houston Rockets, the Suns steered an experienced veteran and NBA champion from 2009 to Phoenix with Trevor Ariza . 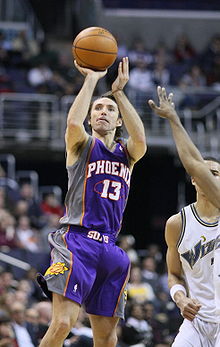 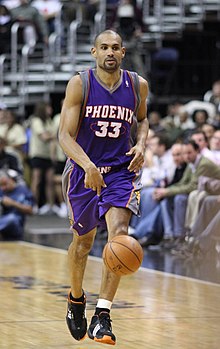 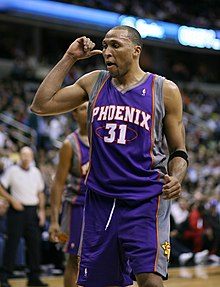