This article or section needs revision: it should still be substantiated with a solid literature base and evidence .-- Aeranthropos ( Discussion ) 12:30 pm , Dec 1, 2018 (CET)
Please help improve it and then remove this mark.

As the captain of the German national soccer team, Hans Schäfer (l.) Welcomes Sweden's Gunnar Gren before the international match on November 20, 1957 in Hanover

In many team sports, a team captain , also a game captain , team captain or captain, is a player who occupies an outstanding position in the game. Formally, this primarily concerns the ability to speak to the referee during the game . Usually the captain is elected by the team members or determined by the coach.

He represents the interests of the players in his team vis-à-vis the club, the coach and the referee, but is also often seen as the coach's extended arm on the field.

In cricket , the team captain plays a central role in the game. According to the rules, he is particularly responsible for ensuring that his team adheres to the rules and the spirit of the game and fair play . He can also be punished for misconduct by the team. In addition to the official tasks, such as representing his team at the toss of a coin and declaring an innings to be completed, the captain also makes decisive tactical decisions, such as the line-up of players or the order of his bowlers .

In ice hockey , in addition to the captain, there are two assistants who are allowed to exercise the captain's rights. The captain needs as well as his two assistants before the game in the score sheet have been noted. The function of captain or assistant may only be performed by field players, not by the goalkeeper. In ice hockey, only the captain and his assistants have the right to talk to the referee during the interruption of the game, whereby he must already be on the ice as a player for such a conversation, i.e. not be allowed to come off the bench as an additional player. The captain can be recognized by the letter C on the player's jersey or, in Russian-speaking countries, partly by the Cyrillic K (К). The assistants wear an A on their jerseys. 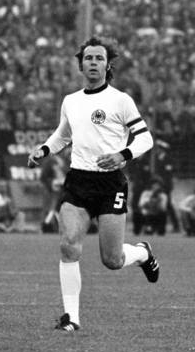 Franz Beckenbauer , honorary captain of the national soccer team , here with armband at the 1974 World Cup

In football , the captain / captain can be recognized by the arm band. Before the start of the game, he greets the team of referees (in lower-class games, only the referee because there are no assistant referees ) and the opposing captain and takes part in the selection of sides . When winning a competition, it is also customary for the captain to receive the trophy.

Often the captain's position in relation to the referee is misrepresented. The rules do not give the captain any more rights - e.g. B. Complaints - a, as his teammate. On the contrary, he has more duties. So he is the contact person for the referee if the situation requires it, e.g. B. to remedy a misconduct of his team or the trailer. Quotation from the DFB football rules 2018/2019: "The captain / captain has neither special status nor privileges, but bears a certain responsibility for the behavior of his team."

If he is eliminated during the game (substitution, injury, expulsion), another player must be appointed team captain, which is formally sealed by putting on the arm band.

Until the rule changes on August 1, 2005, there was also a handball captain who was identified by an armband. The only task of the captain was the choice or draw before the start of the game (choice of side and throw-off). This can now be observed before the game by an official or any other eligible player.