The striker is considered an icon of Swedish football . 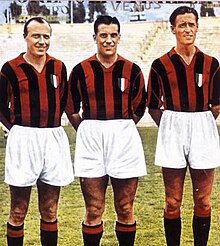 GreNoLi: Gren (left) with his compatriots Gunnar Nordahl and Nils Liedholm in the AC Milan jersey 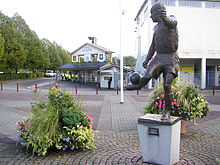 Gunnar Gren statue in front of Gamla Ullevi in Gothenburg

The midfielder Gunnar Gren first played for the small Gothenburg club Gårda. At the age of 19, he made his first international match for the Swedish national football team at this rather insignificant club . In 1941 he moved to IFK Göteborg and became Swedish champion for the first time a year later. He celebrated his first international success in 1948 by winning the gold medal at the Summer Olympics in London . Gren scored two goals in a 3-1 final win over Yugoslavia .

In 1949 Gren moved to Italy for AC Milan together with his national team colleagues Nils Liedholm and Gunnar Nordahl . The three Swedish players formed a trio at the beginning of the 1950s that became known under the name Gre-No-Li and advanced to similar superstars at Milan as the Dutch triple axle Frank Rijkaard , Ruud Gullit and Marco van Basten in the 1980s . In 1953 Gren moved to Fiorentina and after a season at CFC Genoa in 1956 back to Sweden.

At the age of 37, Gunnar Gren first took part in a World Cup. Gren was not allowed to participate in the successful soccer World Cup in Brazil in 1950 (Sweden reached the final round and came third), as Sweden only allowed amateurs in the national team and Gren was already playing as a professional in Italy. At the soccer world championship in 1958 in his own country, the veteran was runner-up. In the semifinals against defending champions Germany , he scored the goal to make it 2-1. The decision was made in the second half after Erich Juskowiak had been sent off and Fritz Walter , who was exactly the same age to the day , was injured. Kurt Hamrin scored the all-important 3-1 for Sweden.

After this tournament, Gunnar Gren ended his active career and became a coach in Sweden. Juventus Turin brought him on as technical director in the 1960s. In 1970, Gren withdrew into private life.

Top scorer of the Swedish Fotbollsallsvenskan