Olof Mellberg (born September 3, 1977 in Gullspång ) is a former Swedish football player and current coach . The zweikampf- and header strong defensive player "traditional character" who during his playing career both as a defense - as well as a defensive midfielder aground, debuted in 2000 in the Swedish national team . The Swede, who was awarded the Guldbollen as Football Player of the Year in 2003, won the Swedish championship title with AIK in the 1998 Allsvenskan season and the Greek championship title with Olympiacos in the 2010/11 and 2011/12 Super League seasons .

After the end of his career, he started working as a football coach in 2016 and for two years managed the fortunes of the Swedish club IF Brommapojkarna , which he led from the third division to the first-class Allsvenskan during his activity .

Breakthrough in Sweden and move abroad

Olof Mellberg started playing football at Gullspångs IF in his hometown. In 1994 he moved to Degerfors IF , where he was promoted to the men's team in the Allsvenskan after two years in youth . With the cup winners of 1993 he established himself in the squad right away and was regularly used in the first division. At the end of the 1997 season, he was only relegated to the team.

Mellberg left the club with his teammate Marino Rahmberg in the direction of AIK Solna . He stayed with the traditional Solna club for nine months and contributed to winning the Von Rosens Cup for the Swedish national champions in 17 league games alongside players such as Michael Brundin , Krister Nordin , Anders Limpar , Nebojša Novaković and Johan Mjällby .

The young defensive player's talent had got around in Europe. In the late summer of the championship season, Mellberg moved to Racing Santander in Spain . In the Primera División he established himself as a regular player and was used in all 38 league games in the 1999/2000 season . On the one hand he helped the club from Cantabria in northern Spain to stay in the league, on the other hand he played his way into the notebook of national coach Tommy Söderberg and his assistant Lars Lagerbäck . On February 23, 2000, he made his debut in the 1-0 defeat against the Italian national team in the dress of the national team, in which he was stuck in the episode. At the European Championship finals in 2000 he was already on the side of Joachim Björklund , Teddy Lučić and Patrik Andersson to the regular players in the defense and played all three games in the group stage, but could not prevent the early elimination as the bottom of the group.

The following season at Racing Santander was similarly unsuccessful for Mellberg. As the table penultimate, the club had to relegate to the second division. However, his consistent performance attracted the interest of other European clubs.

Years in England and promotion to national team captain

Mellberg moved to Aston Villa in the English Premier League in the summer of 2001 . The Birmingham club , with which he signed a five-year contract, paid a transfer fee of approximately five million pounds for his services. In the team around players like George Boateng , Mark Delaney , Alpay Özalan and Darius Vassell , he immediately established himself in the regular formation. At the end of the season he was again part of the Swedish national team at a major tournament. At the soccer World Cup in 2002 he helped Sweden to surprisingly win the group ahead of England , Argentina and Nigeria . He was also used in the round of 16 against Senegal , but retired from the tournament with a goal from Henri Camara in extra time after Golden Goal .

In the Premier League season following the final tournament, Mellberg played in all 38 games of the season and managed to stay in the league with his club three points ahead and twelve points better goal difference to the relegated West Ham United . At the end of 2003, Svenska Fotbollförbundet awarded him the Guldbollen as the best Swedish football player of the year. Under the newly signed coach David O'Leary he reached sixth place with the club in the 2003/04 season and also the semi-finals of the League Cup , in which the team despite a 2-0 win after goals from Thomas Hitzlsperger and Jlloyd Samuel failed in the second leg due to a 2: 5 first leg defeat by the Bolton Wanderers . In the course of the season Mellberg rose to the team captain of the club after he had been appointed captain of the Swedish national team as the successor to Mjällby.

In the office of captain Mellberg led the country selection at the European Championships 2004 to the quarter-finals alongside Erik Edman , Andreas Jakobsson and Mikael Nilsson . There the team met the selection of the Netherlands . After 120 goalless minutes, the team had to compete on penalties . After five penalties each time it was a 4-4 draw as Zlatan Ibrahimović and Phillip Cocu had n't scored. Then Edwin van der Sar saved Mellberg's penalty and Arjen Robben helped the Dutch to advance to the semi-finals.

In the following two years Aston Villa could not build on success under O'Leary and reached only the tenth and 14th place in the table despite the commitment of players like Éric Djemba-Djemba , Aaron Hughes , Wilfred Bouma and Milan Baroš . Mellberg continued to be a long-runner and played a large part of the competitive games for the club. In the summer of 2006 he played with the Swedish national team at the World Cup in Germany . As four years before the home side's first knockout round, but there he was subject to the team after two goals from Lukas Podolski of the German team with a 0: 2 defeat.

After the end of the tournament Mellberg gave up his captaincy roles - Freddie Ljungberg inherited him in the national team and Gareth Barry on club basis . Nevertheless, Villa coach Martin O'Neill continued to rely on him in his defensive chain. In the opening game for the 2006/07 season , Mellberg wrote himself in the history books when he scored his first competitive goal in the 1-1 draw against Arsenal FC at the Emirates Stadium . At the end of the season, in which he was in the starting line-up in all 38 league games, he reached eleventh place with the team. In the course of the following season Mellberg often dodged his preferred central position in the role of right defender, as the newly signed Zat Knight formed the regular central defender duo together with Martin Laursen . Nevertheless, he came back in 34 games used, where he was expelled on March 15 in the 0-2 defeat by Portsmouth FC of the field .

In January 2008, Mellberg announced his departure from England following the 2008 European Championship finals . There he ran in all three group games on the side of Mikael Nilsson, Petter Hansson and Fredrik Stoor in the defensive chain of the Swedish team, who were eliminated early in the group after only one win against Greece . 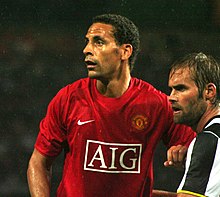 Mellberg (r.) In the "Juve" jersey in a duel with Rio Ferdinand from Manchester United

In the summer of 2008 Mellberg moved to the Italian record champions Juventus Turin on a free transfer . There he received a contract until June 30, 2011. In Italy he played 27 games in his first season in the teams coached by Claudio Ranieri around players such as Christian Poulsen , Hasan Salihamidžić and David Trezeguet . After the club brought back Fabio Cannavaro from Real Madrid in the 2009/10 season , speculation about the future of Mellberg, whose speed had lost a bit over the years, began to arise within the club. After only one season at Juventus Turin, he finally moved in the summer of 2009 for 2.5 million euros to the Greek club Olympiacos , with whom he won the Greek championship twice in a row in the 2010/11 and 2011/12 seasons.

For the 2012/13 season Mellberg moved to the Segunda División for Villarreal . There he helped the club to return to the Spanish House of Lords.

Return to Scandinavia and end of career

For the 2013/14 season Mellberg moved to the Danish capital club FC Copenhagen on a free transfer . There he signed a two-year contract. On July 31, 2014, shortly after the start of his second season in Denmark, Mellberg announced the end of his career after prematurely terminating his contract in Copenhagen.

Career as a trainer

In November 2015 Mellberg was introduced as the new coach of the Swedish club IF Brommapojkarna , who, as a first division relegated player, had also ended the season in the second division on a relegation zone and where he officially took over the position of head coach at the beginning of 2016. After the third division championship in Division 1 in his debut season, the new coach led the club to the championship in the Superettan and thus to return to the Allsvenskan in the second division season 2017 . After the end of the season, despite the success, he decided not to extend the expiring contract with the Stockholm club.

Sweden's footballer of the year