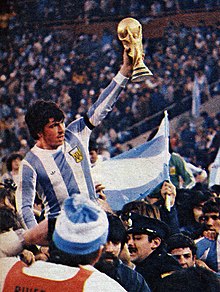 The Argentine national soccer team is one of the most successful national soccer teams in the world with two world championship titles ( 1978 and 1986 ) and three runner-up world championship titles ( 1930 , 1990 , 2014 ) . Argentina won the Copa America 14 times, making them the second most successful team in this competition after Uruguay (15 titles). The last title win at the Copa America came in 1993. She won the King Fahd Cup in 1992 , the forerunner of the Confederations Cup . In 1928 she won the silver medal at the Olympic Games . In addition, the Olympic selection, which included many senior national players, won the gold medal in 2004 and 2008 .

They won the first of a total of 17 official titles in 1921 when they won the forerunner of the Copa America , the Campeonato Sudamericano . In 1910 Argentina had already won the unofficial South American Championship. They have been fourteen times winners of the Copa America, twice world champions and once confederation cup winners (1992, then King Fahd Cup). A U23 team reinforced with senior national players also won two Olympic championships (2004 in Athens and 2008 in Beijing ). The senior national team succeeded in winning the Olympic silver medal in 1928 .

In 1978 , the Argentines won a soccer World Cup in their own country for the first time. They repeated this success in 1986 .

Participation in the Summer Olympics

Argentina won the silver medal in the only participation of the national team in the 1928 Olympic Games. From 1952 onwards , the A national teams no longer took part, but instead amateur teams, and finally , since 1992 , an expanded U-23 selection. Argentina participated in a total of seven Olympic soccer tournaments. The Olympic selection won gold in 2004 and 2008 , and in 1996 it was silver. Argentina could not qualify for the 2012 Olympic football tournament , in 2016 they were eliminated after the preliminary round, and in 2020 they will be represented again.

Argentina have reached the World Cup finals 16 times and so far failed to qualify once. Argentina became world champions twice.

Participation of Argentina in the Confederations Cup

Argentina took part in the first two editions of the FIFA Confederations Cup when it was still called the King Fahd Cup, reached the final in each of the three competitions, but only won the title the first time.

With 201 internationals against Uruguay (of which FIFA counts 183), the Argentine team leads the list of the most frequent international pairings, in 8th place are the games Argentina against Brazil (101 times, of which FIFA 95 counts). Of the world champions, Argentina played the most games against the other world champions, but more than half of them against Uruguay.

The following players were called up for the two official FIFA games in November 2019 (October 31, 2019).

So far all national coaches have been Argentinians.

For years Argentina did not assign shirt numbers at world championships according to player position, but alphabetically according to player names; it was not until the 1980s, when Diego Maradona claimed 10, that the usual system was used. Later, the number 10 was no longer given in honor of Maradona. However, this failed because of the FIFA, as this requires consecutive numbering from 1 to 23 for the World Cup and thus not awarding the 10 would lead to the loss of a player nomination.

Argentina has played the most penalty shootouts at world championships . The Argentines only lost one out of five. In contrast, the record looks worse at the Copa America: five out of eight were lost, including three finals. They also lost once in a friendly game. They lost a total of seven penalty shoot-outs. Only Zambia (17 out of 35) and Malawi have lost more penalty shoot-outs. The most frequent opponent was Brazil, against which one of four penalty shootouts was won.

In German-speaking media, the team is often referred to by the nickname Gauchos . However, this is not used in Argentina itself. There she has no other common nicknames besides la Albiceleste (the white and sky blue).

The Italian sports newspaper Gazzetta dello Sport voted the Argentine national team in 1978 and 1986 " World Team of the Year ".

National teams of associations of the South American Confederation ( CONMEBOL )