The title of this article is ambiguous. Further meanings are listed under Gaucho (disambiguation) .

Gauchos, recording published between 1890 and 1923

Gaucho ( Spanish gaucho [ ˈɡau.t͡ʃo ], Portuguese gaúcho [ ɡaˈu.ʃu ]) is the name given to mainly descendants of Iberian immigrants and indigenous people who raise cattle in the pampas in Argentina , Bolivia , Brazil , Paraguay and Uruguay . One of the most important economic products of the gauchos was cowhide and later dried meat .

The gauchos had their heyday in the 19th century. Folklore has transfigured them romantically, comparable to the North American cowboys . In Argentina and Uruguay in particular, they are of major importance for the national feeling.

The etymology of the designation has not been finally clarified. In Brazil it was associated with a word gaudério (rural highwayman , bandit, tramp ) , which is still used today . In addition, it is traced back to a form of guacho , which is said to be derived from the Quechua word wakcha ("poor", "orphaned") - a word that is also used for young animals that have been abandoned by their mother; The word guaso ( farmer ), which is common in Chile, could have originated from this. Finally, a mixture of the Araucanian words gachu (friend, companion, comrade) and kauchu (cunning person) is believed to be possible. The Spanish colonizers referred to vagabonds as gauchos and orphans as guachos . According to another hypothesis, descendants of the Spaniards ( criollos and mestizos ) began to pronounce the Spanish word chaucho - derived from the Arabic chaouch , "animal driver" - as "gaucho". 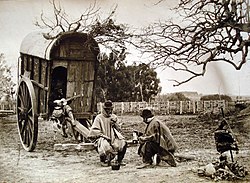 Gauchos drink mate, one plays guitar on the pampas.

The gaucho has its origins in the confrontation of two cultures that shape Argentina to this day: European culture and the culture of the country's original inhabitants. The first gauchos were perhaps people who freed themselves from the shackles of their origins and emigrated to the solitude of the great pampas. Here there was water and delicate grass for the cattle. Over time, the image of the free gaucho, who leads a nomadic life with his horse, who sleeps outdoors on his mat when the night surprises him on the wide plain, solidified. The gaucho was respected, he kept his word and was also known for his solidarity and show of favor ( gauchadas ). The fact that they defended the 1,700 km long border between Argentina and Paraguay also contributed to their reputation as a combative type of person.

The gauchos live widely scattered in solitude. In the past, this led to social alienation and a modest lifestyle:

“[...] the pleasures of luxury are absolutely incompatible with this isolation, according to one's wealth one could build a splendid building in the wilderness, but the drive and the example are missing; one is frugal and does not know the addiction to appear with boastful splendor, as occurs in city life; loneliness calms the mind. [...] What the gaucho loves above all [...] is freedom, individual independence in its absolute meaning, independence, which is capable of submission for a moment, but which does not fail to regain itself immediately to elevate their unbridled passion. Lord of the wasteland, the gaucho likes himself in his vast, sterile territory. He spends his life in it without establishing a settlement based on a community of interests. Should it be reformed through teaching, by imparting social concepts to it? But where should a school be built so that it could be reached by the children who live ten leguas in all directions? [...] What remains of religion in the pasture landscapes has been reduced to nature religion. [...] Loneliness is the reason why the gaucho lives under such conditions. He has nothing to moralize him, he lives at risk for the day. He does not like the work of agriculture or industry [...] The gaucho is a master in all physical exercises which require strength and skill [...] Barely awakened in the morning, his first thought is to look after his horse, to saddle up, to swing on its back, then to herd the cattle together, enormous distances are covered at a straight gallop. [...] One must see these gauchos in order to understand the unbridled and bold characters which emerge from the struggle of isolated man with wild nature [...]; one must have seen these faces surrounded by unshaven beards and long hair to understand their self-confidence and contempt for the dangers "

Around 1600, the gaudérios or changadores - probably the first gauchos - appeared in the north and northwest of Argentina . Gaudérios were farm workers from Rio Grande do Sul, Brazil . The word gaudério made the leap to the Río de la Plata and was used to designate their own farm workers. According to another hypothesis, gauchos were descended from Spanish descendants, mestizos or Indians, but also from descendants of European immigrants, blacks or mulattos , who adopted the gaucho lifestyle.

The appearance of the gauchos is closely linked to the history of the so-called Cimarrón cattle. At that time there were thousands of wild cattle and horses in the vastness of the pampas , which were known as cimarrones. Landowners were given permission to catch and slaughter the wild cattle in vaquerías . That is where the gauchos worked. To find the wild cattle, they scoured the uninhabited pampas. They earned their living in small shops selling leather and tallow - at that time almost the only riches in the country. To catch the cattle, they used a pole with a crescent-shaped wire attached, as well as boleadoras : three stones that were tied together with a string and caught in the cattle's legs. Their further tools: the Gaucho Knife façon , the Lasso to and the right method, the best meat in the world pökeln .

In the 17th century the gaucho wandered from cattle farm to cattle farm with his lassos and knives. Clothing and horse were the only possessions, family and friends, the store pub ( pulpería ) the only company. The gaucho built his simple house out of mud. He covered the door with leather. When a cattle was slaughtered, he only took some meat and leather to cobble into boots. The gaucho lived like this until the beginning of the 18th century, when the number of Cimarrón cattle was so depleted that vaquerías were banned.

When Buenos Aires was founded, the areas far from the city were called estancias . These extended into the interior of the country during the Viceroyalty, as far as regions that had recently been ruled by Indians. Authorities supported this development so that the livestock were no longer endangered by vaquerías . The owners did not look after the estancias themselves , but hired managers and overseers. Gauchos and slaves lived in poor huts and worked in the country, the originally wild cattle became the cattle of the estancia.

There were more and more estancias and the gaucho began to give up his nomadic life. His skills were in demand: driving the cattle, neutering and fencing the estate. Nevertheless, if he had the money for his "sins" ( yerba or tobacco), he returned to his free life as a "decent rider of the wide plains". This became increasingly difficult for him at the end of the 18th century.

Estancias invested in facilities and staff as early as the first decades of the 19th century as the export of leather and the use of beef increased. At the same time, the cultivation of crops and cattle breeding with imported animals began. The gaucho adapted to the new situation. He gives up the rodeo and takes care of the estancia.

When the country fought against Spain after May 25, 1810, the gauchos joined the patriotic ranks. His audacity, his ability to ride and his knowledge of the land predestined the gaucho to be an excellent soldier. He led armed forces and fought under the leadership of General Belgrano in the Alto Perú or with San Martín in Chacabuco and Maipú . In the north, gauchos ( Gauchos de Güemes ) defended the borders of the new country.

Later, gauchos took part in the civil wars on the side of the caudillos . For one thing, the gaucho saw the caudillo as someone with similar ideas and habits. On the other hand, they felt protected from a law from 1815, according to which every dispossessed was declared a servant and every servant without an employment contract was declared lazy. Many gauchos were thus marginalized. Given the choice, many opted for the ranks of the caudillos instead of a miserable life among the Indians.

The federalism divided the Gauchos. Some took up positions for Juan Manuel de Rosas , others joined the Unitarian troops. Also in the west, in the provinces of the Cuyo and in La Rioja , caudillos like Chacho Peñaloza and Felipe Varela were able to rely on the support of the gauchos.

Against the background of these changes, after 1850 the gaucho gradually became a farmer. The lands were fenced in and the owners of the cattle herd opposed the gauchos, who killed strange animals. Many gauchos felt threatened, seized and imprisoned or obliged to join the militia if they could not produce work permits.

Then there was the immigration of thousands of farm workers. They secured land, adapted better to working with the soil, and ousted the gaucho. He had to make a decision: some did not accept to lose their lifestyle without compromise, others stayed in the estancias and worked as farm workers.

In the course of Jewish immigration and the formation of agricultural colonies, the gaucho was also able to become a figure of identification in Jewish rural life, as Alberto Gerchunoff depicted , especially in his book Los gauchos judíos .

Typical outfits of the Argentine gaucho are boots made of foal leather and spurs made of silver or iron. These come bloomers ( bombachas ), Sombrero or Hat ( boina ) and neckerchief; the gaucho knife ( facón ) is attached to the belt. Gauchos not only work in estancias in the pampas, but also in Argentine Mesopotamia and the northeast of the country. There they are equipped with white socks, chiripá (a kind of culottes ), sombrero and poncho . The red poncho salteño is very well-known , which with its black stripes imitates the flag of the province of Salta and is also widely used in folklore. While a simple poncho mainly serves as protection against wind and weather, there are also higher quality works made of fine fabrics that are primarily used decorative.

A number of poems and stories were dedicated to the gaucho in 19th century Argentine literature. The best-known work of "Gaucho literature" is El gaucho Martín Fierro by José Hernández (1872). One of the latest works in gaucho literature is El gaucho Florido by Uruguayan Carlos Reyles (1932).

The gaucho had a permanent place in Argentine folklore music. An inseparable companion of the gaucho was his guitar. He probably contributed to the spread of styles and dances such as Zamba and Chacarera as well as the poem-like chant of the Payada . 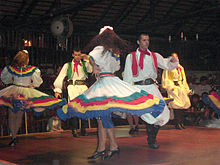 Gauchos in other countries