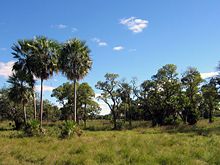 Landscape in the Gran Chaco in Paraguay

The Chacarera (from chacra = field) is a folk dance and a style of music and is one of the most famous folklore of Argentina .

The exact origin of the Chacarera is unknown, but rural areas of the Gran Chaco , which extends over the north of Argentina , the western part of Paraguay and the southeast of Bolivia , are suspected . Around 1850, the Chacarera was originally danced in the rural areas and later also in the cities in the northern Argentine province of Santiago del Estero , which also belongs to the Gran Chaco. It is also associated with the neighboring pampas and the gauchos living there , who could have brought the Chacarera to Buenos Aires at the beginning of the 20th century . The Chacacera thus belongs to the folklore Pampeano (from the Pampa), which is a direct descendant of Spanish folk music and here in particular the Zarzuela .

In recent times the Chacarera has also gained many followers on the Bolivian Altiplano and it now also exists far away from the original distribution area, e.g. B. in La Paz, Chacarera groups. Due to the strong contact with the Argentine Chacarera tradition, there has been a strong stylistic alignment in recent years, so that the two regional variants now differ mainly through a slightly different dance costume (different hats), but not through a fundamental difference in the steps distinguish.

The music is shaped by the guitar , violin , accordion and the bombo . The melody follows the Bombo, which plays the rhythm in 12/8 time .

Chacarera is a very happy, easy to learn, traditional, Argentine folk dance that can be danced as a couple, but incorporated in a group.

The Spanish influence cannot be overlooked in the Chacarera. The chacarera is a strongly rhythmic dance. The dancing takes place in pairs , but without a hand grip. Dancers dance within an imaginary rectangle and execute different images. Elements of the dance are the basic step (paso basico), the rhythmic snapping of the fingers (castagnettas), clapping hands (palmas), steppes (zapateo) primarily for men and swinging skirts (zarandeo) for women. Similar to the Sevillanas , footwork and swinging skirts alternate with changes in position.

During the first heyday of tango (approx. From 1920 to 1955) the chacarera eke out a background existence in the capital, but the popularity of the chacarera increased in the 60s with the resurgence of Argentine folklore, which is also connected with the ban on tango emanated from the military government. Inland, however, the chacarera has never lost its place as the most important dance of the people. Well-known musicians were Los Chalchaleros, Los Tucu Tucu and the Carabajal family, from which many generations of Chacarera musicians and singers emerged.

In recent years the chacarera has become very popular again in both Bolivia and Argentina. Above all, progressively minded, better educated young adults from the city hear them. It is part of a return to one's own cultural roots. It is now being danced again at milongas (especially in Argentina, occasionally also in Europe).

An important representative in dance and choreography is the Argentine Luis Pereyra .

Most of the songs tell of the country and its people and the immeasurable love of the people for their homeland. Many songs tell of the homesickness that the Santiagueño feels, who had to leave his homeland: "When I left Santiago, I cried all the way. I cried, I don't know why. I can say that I am strong, but I got weaker this day. I left the beloved earth and the rancho where I was born, where I lived happily and happily sang. " Outside of its home, the Santiagueño feels like " a wild plant that is dying outside its salt desert. "