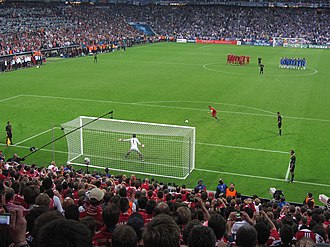 First penalty in the penalty shootout of the 2012 Champions League final. In the background, the remaining field players gather in the center circle.

In a penalty shootout, five players from each team take turns taking a shot on goal from the penalty mark . The team with the most goals wins. However, this process is terminated prematurely if a team has achieved a lead that cannot be recovered. If there is still a tie after the process, this will be extended by one shooter per team until the game is decided.

In addition to extra time and the different scoring of goals scored away from home, the rules also provide for penalty kicks in the section “Procedures for determining a winner”, which for a number of years was officially referred to as “shots from the penalty mark to decide the game”. In the German rulebook one encounters the peculiarity that in the corresponding section there is always talk of the "penalty kick", which is not further defined as such. These are undoubtedly shots from the penalty mark according to the rules of a penalty kick , with a subsequent shot not permitted and the determination of the distance by the fact that it is clearly defined where the other players and the currently uninvolved goalkeeper have to be, is irrelevant. However, the "effect" must always be awaited, which means that, for example, a shot that was directed against the crossbar by the goalkeeper and in which the ball first jumps back into the field, but then bounces into the back of the goalkeeper and then goes into the goal , can be counted as a goal.

Most football games do not require such a decision. Friendlies never require a decision, in point games a draw results in a point division. Games that are played according to the knockout system , such as cup games or football tournaments after the group stage , however, require a winner, as do pairs in the knockout system that despite the return game are tied at the end of the second leg according to the regulations, for example in the elimination phase of the UEFA Champions League or in relegation games. Terminates the regular time draw and provides an opening provided in the competition rules method for the determination of a winner ( extension , away goals control . Or other fixing such as class lower club) no decision, according to the current regulations, a penalty shoot-out is to be performed; Nevertheless, the competition regulations can also provide for a penalty shoot-out without the need for an extension and / or the application of the away goal regulation.

The shooters of both teams shoot at the same goal. This prevents unequal conditions, for example due to a low position of the sun. The referee determines which goal will be scored if there are objective reasons for choosing a goal, otherwise the referee will toss a coin .

All players who are still taking part in the game at the final whistle are eligible to participate. Substitutions are only permitted for the goalkeeper if he is injured and the exchange quota has not yet been exhausted. If the number of players is different before or during the penalty shoot-out (due to exclusions / injuries), the numerically stronger team must remove as many players of its own choosing until both teams have the same number of shooters. The background to this rule can be derived from the following example: If a team with only ten players competes against a complete opponent, the supposedly weakest shooter of the complete team would have to compete against a freely selectable, i.e. probably the best shooter of the reduced team, in the eleventh pair . So would a team that an expulsion suffered, even advantage. This would contradict the idea of fair play .

All players, with the exception of the respective shooter and both goalkeepers, must remain in the center circle during the penalty shoot-out. The goalkeeper of the shooter's team must be outside the penalty area and should seek out one of the corner points of the penalty area with the goal line.

The referee and both captains toss to decide who will take the first shot. The winner of the draw has the right to determine whether his team will shoot first. One player from each team alternately shoots a penalty (see above ).

The team that converts more of their five penalties than the other team wins. If a player awards his penalty kick (is blocked by the goalkeeper, shot next to or over the goal or the shooter only violates the rules if the ball does not go into the goal) and his team falls behind as a result, they have not yet lost if there are still enough penalties to be taken to be able to catch up (for example, if the score is 2: 3 after every three penalties). The penalty shoot-out is ended prematurely if one of the two teams is determined as the winner early because the deficit can no longer be made up. This is the case, for example, with a score of 4: 2 after every four penalties.

If there is a tie after every five penalties scored, the procedure is continued by one penalty for each team until a winner is determined. First of all, all players including the goalkeepers of a team must score a penalty.

If all players had their turn and there is still a tie, one player from both teams takes turns shooting again. However, the order of the shooters within the team is independent of the first round, that is, the originally seventh shooter may, for example, take the first penalty shot of the second round. However, no player may shoot a third time unless all teammates have started at least twice. This applies accordingly to all further rounds that may be required.

At the U-17 European Championships for women and men in 2017 , a new procedure, usually referred to as the "ABBA system", was tested: The shooters of teams A and B competed in the order ABBAABBA etc. - similar to the procedure for the tie Break in tennis . According to the fair play initiative of the International Football Association Board (IFAB), this experiment was intended to check whether the starting advantage of team A could be reduced. The new procedure was used in both tournaments in the semifinals and finals, with Germany winning twice as Team A - against Norway and Spain. In the junior division, Spain won the semi-finals against Germany as team A and in the final against England as team B. The new procedure was also to be tested at the Blue Stars / FIFA Youth Cup 2017 on May 24th and 25th, 2017 in Zurich . It was also used at the 2017 U-20 World Cup , e.g. B. in the game for 3rd place between Italy and Uruguay.

Variants of the modern penalty shootout were used in various national competitions and in smaller tournaments as early as the 1950s and 1960s. Examples of national competitions include the 1952 Yugoslav Football Cup , the 1954 Copa México , the 1958/59 Coppa Italia and the 1959/60 Swiss Youth Cup. At the Coppa Italia 1964/65, at which one of the two semi-final matches, u. between Inter Milan and AS Roma had ended 2-2 despite extra time (and in which the Milanese were able to qualify for the final against Juventus Turin (1-0 win against AC Turin ) on penalties), there was a special mode: there was only one player on both sides to (initially) six shots. These were (order unknown) Luis Suárez for Inter and Pedro Manfredini for the Romans - and Suárez took all the shots, but his rival only four. International examples include the watch cup 1962 (suggested by its founder Kurt Weissbrodt), the final of the Trofeo Ramón de Carranza 1962 (at the suggestion of journalist Rafael Ballester), and a silver medal playoff game between amateur teams from Venezuela and Bolivia at the Bolivar Games in 1965 However, some of these variants differed from the current form. At the Coppa Italia 1960, for example, after an even penalty shoot-out, the lot was drawn again instead of continuing with a penalty kick. In the Youth Cup 1966/67, the penalty shoot-out was repeated after a tie with five more penalties and in the watch cup in the early years one shooter had to take every five penalties and if the result was equal several times, the drawing of lots was used again. At the Copa México 1954, however, instead of the five shooters usual today, only three per team competed.

It is controversial who first invented the modern variant. The referee Karl Wald claimed the idea for himself. On May 30, 1970, at the Bavarian Referee Association Day in Munich, he found a majority among the delegates against the resistance of the association leadership for the rule that he had meticulously worked out and now applies internationally. A little later, the German Football Association (DFB) also adopted the rule from Bavaria.

In the area of ​​the DFB and its member associations, the first penalty shoot-out in a competitive game took place three years earlier. On May 27, 1967, the WFV Cup match between SpVgg 07 Ludwigsburg and 1. FC Normannia Gmünd was decided. The Württemberg Football Association had introduced the practice, which had been tried and tested in the youth sector for several years, as mandatory for the active sector from 1965.

Independently of Wald, the Israeli Yosef Dagan also developed a variant of modern decision shooting after seeing how the Israeli national team lost the 1968 Olympic quarter-final game by tossing a coin. Michael Almog, who later became president of the Israel Football Association , describes Dagan's proposal in a letter published on FIFA News in August 1969 . This proposal was adopted by FIFA and discussed on February 20, 1970 by a working group of the International Football Association Board (IFAB). The working group recommended the proposal for adoption although it was "not completely satisfied" with it. The rule change in favor of decision shooting was adopted at the IFAB annual meeting on June 27, 1970 with the rules proposed by Wald.

In July 1975, UEFA decided to use this process to decide the finals in both the championship and cup winners' cup (previously there had been a repetition; previously, this regulation had only existed in the preliminary rounds).

The first major tournament to be decided by a penalty shoot-out was the European Football Championship in 1976 , when Germany and Czechoslovakia met in the final . Uli Hoeneß shot over the goal, while Antonín Panenka converted his penalty with a slight lob into the middle of the goal and made the ČSSR European champions. For the first time at world championships , the semifinals at the 1982 World Cup were decided by Germany against France in Spain with a penalty shootout, with Germany prevailing. The first official penalty shoot-out in a Germany-wide competition took place on December 23, 1970 at the DFB Cup match between FC Schalke 04 and VfL Wolfsburg , which Schalke won.

Effect on the official game result

The official playing time of a football game ends after 90 minutes; if an extension is planned and necessary, after 120 minutes. The score at this point is counted as the official game result. The subsequent penalty shoot-out only serves to “determine a winner”. For the award of points, for example for the FIFA world rankings , according to FIFA rules according to the new calculation method, the loser from the penalty shoot-out receives 0.5 W-points from a possible one (for the draw achieved) and the “winner” of the game only receives 0 , 75 W-points, previously 1 or 2 M-points.