The coin toss is the simplest real chance experiment . In the idealized case, it has two outcomes, heads or tails, whose probabilities are equal with 50% each. In fact, it is also possible for the coin to land on the edge. However, this is very rare. Depending on the coin, there is also a minimal imbalance due to the weight difference between the sides.

The random experiment is often used in sports, for example soccer or American football . The coin toss serves as a random mechanism in two-up , a game of chance offered in many Australian casinos . In the case of the fox , a coin has to be thrown at a certain place; however, this is a game of skill and not a game of chance.

In the card game poker , the term coin flip is used to describe a situation in which two players with roughly equally strong hands are fighting for a win. 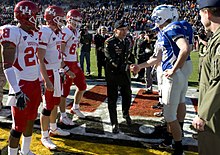 The coin toss is often used in probability theory as a simple prototype of a random experiment. This experiment is described with the following model:

This is a discrete, uniformly distributed random variable.

The model can also be varied as follows: