Typically, this probability distribution is used in random experiments , the results of which are equally frequent. If one assumes (with or without justification) that the natural events are equally likely, one speaks of a Laplace experiment. Common examples of Laplace experiments are the Laplace cube (a perfect six-sided cube where any number from one to six has a probability of falling) and the Laplace coin (a perfect coin where either side has a probability of falling). See also continuous uniform distribution , Laplace's formula .

A distinction is made between different cases for discrete equal distribution. These differ in the result sets and, accordingly, differently defined probability functions and distribution functions . In all cases, the uniform distribution is denoted by, where the carrier is.

In the most general case, the results that occur are any with and if is. So the carrier is . The probability function of the discrete uniform distribution is then

and thus it satisfies the distribution function

On any whole numbers 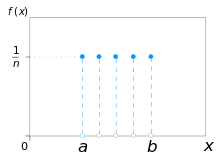 One chooses two with , one selects as a carrier, the amount

and defines the probability function

and the distribution function

On natural numbers up to n

and receives as a probability function

as well as the distribution function

Here is the rounding function .

The expected value is in the general case

In the second case one obtains

what to do in the third case

The representation of the variance is already confusing for the general case, since no simplifications are possible:

For the second case it results

In the third case

In the second and third case, the discrete probability distribution is symmetrical about its expected value. In the general case, no statement can be made.

For the last two variants, the skewness is equal to zero, in the first case a symmetrical distribution is required in order to be able to deduce the skewness zero.

The excess is in the second case

and with that is the bulge

In the third case this is simplified to excess

and to the bulge

In the second case is then

and accordingly in the third case

The mode can be specified, but has little informative value. It corresponds exactly to the carrier of the distribution, i.e. , or or .

If in the second case , the probability generating function is given by

In the third case this then results

Both cases can be shown elementarily by means of the geometric series .

The torque-generating function results for any as

The characteristic function results for any as

The taxi problem is a standard example of estimation theory to show that several different estimators for the same problem can be found without problems, of which it is not clear a priori which is better. Variants of the taxi problem were apparently important during World War II in order to draw conclusions about the number of tanks in the opposing army from the serial numbers of shot down tanks. This would correspond to the estimation of , if one assumes that the serial numbers are evenly distributed.

Relationship to other distributions

Relationship to the Bernoulli distribution

Relationship to the beta binomial distribution

Relationship to the two-point distribution

Relationship to the Rademacher distribution

Relationship to the urn model

The random experiment is: A die is thrown once. The possible values of the random variables are: . According to the classical concept of probability, the probability is the same for every expression. It then has the probability function

with the expected value for and :

An application in practice could be an operations research ( marketing ) problem . A company wants to introduce a new product on the market:

The discrete uniform distribution is often named after Pierre-Simon Laplace (Laplace cube). However, it has nothing to do with the continuous Laplace distribution .