The Maxwell-Boltzmann distribution or Maxwell's velocity distribution is a probability density of statistical physics and plays an important role in thermodynamics , especially in kinetic gas theory . It describes the statistical distribution of the magnitude of the particle velocities in an ideal gas . It is named after James Clerk Maxwell and Ludwig Boltzmann , who first derived it in 1860. It results from the Boltzmann statistics .

Because of the simplifying assumption of an ideal gas, the velocity distribution of the particles in a real gas shows deviations. However, at low density and high temperature, the Maxwell-Boltzmann distribution is sufficient for most considerations.

Derivation of the velocity distribution in the kinetic gas theory

Derivation with the help of the Boltzmann factor

given, and the probability that it is occupied by a particle in the thermodynamic state of equilibrium of the particle system is given by the Boltzmann factor

This contains the mass of the particle, the Boltzmann constant and the absolute temperature . The question is about the proportion of molecules with the amount of speed in an interval . The corresponding density of states is to be determined from the basic assumption that the density of states in the three-dimensional space of the velocity components is constant. According to all states of the same kinetic energy have the distance from the origin, so here they fill a spherical surface of the size . The volume element then belongs to the interval . Consequently, the sought-after proportion of molecules is equal to the product of the volume element, the Boltzmann factor, which is constant for the entire volume element, and a constant normalization factor :

The normalization factor results from the fact that the integral of the probability density has the value 1.

Derivation using the normal distribution of the components of the velocity

According to the kinetic gas theory , not all gas particles in an ideal gas move at temperature (in Kelvin ) at the same speed , but randomly distributed at different speeds. No spatial direction is preferred here. Mathematically this can be formulated in such a way that the components of the velocity vector of the gas particles of the mass are independent of each other and normally distributed , with the parameters

Average speed: and the spread of the speeds

To derive the Maxwell-Boltzmann distribution has to all particles with the same velocity magnitude integrate (or clearly "add up" this). These lie on a spherical shell with a radius and infinitesimal thickness around the speed 0:

The above-mentioned integral denotes all vectors with amounts in the interval . Since the definition of only includes the squared amount of the velocities (see definition above), which does not change in the infinitesimal interval , the integral can easily be transformed:

Here only the simple volume integral remains to be solved. It just gives the volume of the infinitesimal spherical shell and we get the Maxwell-Boltzmann distribution we are looking for:

Conclusions from the equations

Substance dependence of the velocity distribution at 0 ° C for hydrogen (H 2 ), helium (He) and nitrogen (N 2 ) 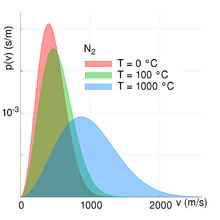 Temperature dependence of the velocity distribution for nitrogen

The Maxwell-Boltzmann distribution explains, for example, the process of evaporation. For example, damp laundry can dry at temperatures of 20 ° C, since there is a small proportion of molecules with the required high speed in this distribution curve that can detach from the liquid structure. So there will always be some molecules even at low temperatures that are fast enough to overcome the forces of attraction by their neighbors and from the liquid or solid aggregate state transition to the gaseous state of what is known as evaporation or sublimation referred. Conversely, among the comparatively fast particles of the gas there are always some that do not have sufficient speed and therefore change again from the gaseous to the liquid or solid state, which is called condensation or resublimation . These processes are summarized under the term phase change , whereby a dynamic equilibrium is established between particles that enter the gas phase and particles that exit the gas phase, provided there are no external disturbances . This is the subject of investigation in equilibrium thermodynamics , which is why it is also called thermodynamic equilibrium . The particles of the gaseous phase exert a pressure in the state of equilibrium , which is called the saturation vapor pressure . The phase behavior of substances is shown graphically in their phase diagram .

With all distributions it is assumed that a reference point is chosen that does not move, otherwise there would be no symmetry of the velocity distribution and the gas mass moves as a whole.

The most likely speed

is the speed at which the density function has its maximum value. It can be calculated from the claim . is the particle mass and is the molar mass of the substance.

The mean speed is the average

Here is the total number of particles and the ( ) their individual speeds. If one summarizes the particles with the same speed in each case, the result is

The solution of the integral is:

The root mean square speed is defined by:

The following equation of state results from the kinetic gas theory :

The empirically determined equation of state of ideal gases is:

If you equate the expression , you get:

When rearranged according to the root , you finally get:

The root mean square of the velocity of the gas particles is thus directly proportional to the square root of the temperature, provided that the molecular mass does not change (e.g. due to a chemical reaction). A doubling of the temperature on the Kelvin scale leads to an increase in the square mean speed by the factor . Conversely, in this way the temperature can be defined by the kinetic gas theory.

The same result is obtained also when substituted in the following equation, and then from 0 to integrated :

The root mean square speed is also a measure of the mean kinetic energy ( E kin ) of the molecules:

This statement can also be obtained using the uniform distribution theorem , since it is an ensemble mean value for a gas particle with three degrees of freedom.

Here ( ) are the individual velocities of the particles and their total number .

By substituting and and integrating one gets:

The relationship between the speeds results from:

Derivation in the canonical ensemble

The Maxwell-Boltzmann distribution can be derived using the methods of statistical physics. One considers a particle system with the Hamilton function

For the derivation only the assumption is made that the potential is conservative, i.e. independent of the. Therefore, the following derivation also applies to real gases .

The system is in the canonical state with phase space density

and the canonical partition function

The parameter is proportional to the inverse temperature

The expectation value of a classical observable is given by

Now we can calculate the probability density for the momentum of any particle in the system. According to the above transformation theorem applies:

In the denominator one integrates via a Gaussian function ; the integration in three dimensions can be reduced to a one-dimensional integral with

The probability density for the momentum of any particle is obtained:

The pre-factor essentially corresponds to the thermal De Broglie wavelength .

here is the Heaviside step function , which makes the probability of negative magnitude velocities disappear.

If you set for , you get to the Maxwell-Boltzmann distribution