The Heaviside function , also called theta , step , threshold , step , jump or unit jump function, is a function that is often used in mathematics and physics . It is named after the British mathematician and physicist Oliver Heaviside (1850–1925). 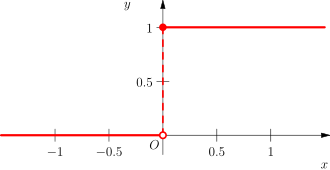 So it is the characteristic function of the interval of nonnegative real numbers .

In the specialist literature, notations that differ from these are used instead :

The function has numerous applications, for example in communications engineering or as a mathematical filter: multiplying each value of any continuous function point by point by the corresponding value of the Heaviside function results in a function that has the value zero to the left ( deterministic function), but to the right of it corresponds to the original function.

The value of the Heaviside function at this point can also be set as follows. To mark the definition one writes

with . So it can represent any set as long as it contains 0 and 1. Usually, however, is used.

This definition is characterized by the property that then is.

By choosing and consequently one achieves that the equations

are valid for all real ones.

An integral representation of the Heaviside step function is as follows:

Another representation is given by

A heuristic explanation for this formula is obtained if one and suitable approximated z. B. by

whereby the limit value is considered in each case .

Alternatively, a differentiable approximation to the Heaviside function can be achieved using a correspondingly standardized sigmoid function .

An antiderivative of the Heaviside step function is obtained by splitting the integral according to the two cases and from the case distinction in the definition:

The set of all antiderivatives of the Heaviside function is thus