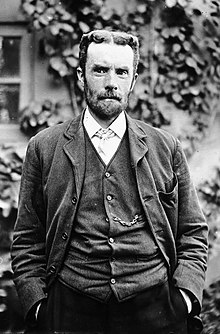 Oliver Heaviside (born May 18, 1850 in London , † February 3, 1925 in Homefield near Torquay ) was a British mathematician and physicist who made major contributions to the development of the theory of electromagnetism .

Heaviside grew up in London. His father made woodcuts and watercolors. Heaviside developed scarlet fever in early youth , and the residual hearing loss made the short, red-haired Heaviside an outsider among his classmates. Despite good academic achievements, he left school at 16 to become a telegraphist, with the assistance of his uncle Charles Wheatstone (a physicist and one of the inventors of telegraphy). Heaviside learned German and Danish and from 1868 learned the telegraph trade in Fredericia (Denmark). In 1870 he was back in England, where he quickly made it to Newcastle as chief telegraph operator for the Great Northern Telegraphe Company . From 1872 he published essays on electricity, which even attracted the attention of James Clerk Maxwell , who mentioned them in the second edition of his main work Treatise on Electricity and Magnetism . 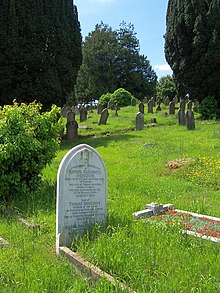 Heaviside was fascinated by Maxwell's work. In 1874 he gave up his job and moved to live with his parents in London to devote himself entirely to studying electricity. He had to acquire his mathematical knowledge autodidactically, and it took him years to delve deeper into Maxwell's work. In the end, he went over to developing his own mathematical methods, which were far ahead of his time and which greatly simplified electromagnetic theory and the treatment of resonant circuits. From 1882 he published regularly in The Electrician magazine . He was financially supported by his brother, but leading scientists also supported him. He last received a pension from 1896 and offers for financial support, for example from US electricity companies, the Royal Society or French engineers, which he often turned down out of pride. At the same time, he was in constant financial distress, partly because of his habit of heating his home to high room temperatures all winter, which earned him some of the highest private gas bills in the county.

The famous physicist Lord Kelvin recognized him as an authority in his field (publicly in the Presidential Address 1889 for the Institution of Electric Engineers) and so did physicists such as Oliver Lodge and George Francis FitzGerald . He corresponded with Heinrich Hertz and in 1891 he was elected to the Royal Society, in 1899 to the American Academy of Arts and Sciences . In 1905 he also received an honorary doctorate from the University of Göttingen , he became an honorary member of the Institution of Electrical Engineers (1908), the American Institute of Electrical Engineers (1918), received the Faraday Medal in 1921 and was nominated for the Nobel Prize in 1912. He was also to receive the Hughes Medal of the Royal Society in 1904, but refused.

Heaviside lived for a long time with his parents, who lived with him in Paignton from 1889, above his brother's music shop. In 1894 his mother died and he moved to Newton Abbott in 1897 after the death of his father and in 1908 to Torquay near his brother. There he shared a house with Mary Way, his brother-in-law, and helped her with the mortgage payments. In 1911 the house became his property. However, he commanded Way around so much that she moved out in 1916. He never married and ended up becoming an increasingly eccentric recluse. Many of the stories that circulated about him were just myths, partly promoted by his bizarre humor - for example, he made fun of signing the enigmatic WORM behind his name. Heaviside is buried next to his parents in Paignton .

Heaviside was instrumental in the introduction of the vectors and vector analysis with which he greatly simplified the Maxwell equations, which are fundamental for electrodynamics, in 1884 and brought them to the form we know today. Heaviside also independently discovered the Poynting vector . The vector methods became very popular from around 1910 and replaced the quaternions by William Rowan Hamilton and his Scottish protagonist Peter Guthrie Tait , which were also very popular in England in the second half of the 19th century .

He also introduced the methods widely used today for the analysis of electrical oscillating circuits and circuits and coined many terms such as impedance or inductance . He was one of the first to use complex numbers. For the solution of the differential equations that occur, he developed his operator calculus ( operational calculus ), which turned the differential equation into an algebraic equation and anticipated the Laplace transformation , as mathematicians later recognized. His operator calculus , which he developed from 1880 to 1887, was met with suspicion by contemporary mathematicians, but was later justified by the work of Bromwich and Norbert Wiener . It was not until a good 65 years later that Jan Mikusiński was able to justify his operator calculation with exact mathematics.

He used Heaviside's jump function , named after him, to investigate pulses in electrical lines, and he also established the line equation that is decisive for the propagation of signals in telegraph lines . Heaviside was also the first to recognize the importance of arranging induction coils on the telegraph lines at regular intervals for distortion-free transmission , which is mathematically formulated in the Heaviside condition . In England he could not assert himself with it because he was at odds with the technical manager of the post office. In the USA, however, ATT engineers studied his work carefully and applied for a patent under their own name ( Mihajlo Pupin 1900). Pupin made sure his name stood for the invention and made a fortune with it. Heaviside was offered financial compensation, but Heaviside refused despite its financial difficulties: he wanted full recognition. In 1880 Heaviside received a patent for the coaxial cable in England .

In 1902 he predicted the existence of the Kennelly-Heaviside layer in the ionosphere , on which radio waves can be reflected and which thus enables worldwide propagation (it was only proven experimentally in 1923).

In 1888/9 he investigated the field of moving charges, which inspired George Francis FitzGerald to work in advance of the special theory of relativity (Fitzgerald-Lorentz contraction). He also examined the transition into denser media, anticipating the Čerenkov radiation (in Volume III of his Electromagnetic Theory of 1912). At the same time, Heaviside was also investigating "electromagnetic mass," which he believed to be as real as that of ordinary matter.

For the electrical analogue of the permanent magnet , he introduced the term electret .

The Heaviside-Lorentz system of units used in particle physics is named after him, in which applies.

A moon crater and a Martian crater are named after him.

Mathematics is an experimental science, and definitions didn't come first, they came about later.

The Kennelly-Heaviside layer , named after Heaviside among others , was taken up by TS Eliot in his poem "The Journey To The Heaviside Layer", which was set to music in the musical Cats .