The Neugraben rafts , also raft trenches (Czech Flájský plavební kanál or Nový plavební kanál ), was an approximately 18 km long raft ditch from the 17th century in the Ore Mountains . It was used to raft wood for mining and metallurgy . From the Flöha near Fleyh ( Fláje ) it led to the Freiberg Mulde near Clausnitz .

Map of the former raft ditch

Starting from Fleyh, the ditch led about 3.5 km in a north-westerly direction to the eastern end of the village of Bohemian Georgenthal ( Český Jiřetín ). Here it changed its direction by almost 180 ° and led about 3 km to the east into the Rauschenbachtal. After crossing the Rauschenbach and the Czech-German border , it headed west again. The watershed between Flöha and Freiberger Mulde is crossed north of Cämmerswalde . From there the ditch leads north through Clausnitz and finally joins the Rachel after about 18 km at the southeast end of Clausnitz. 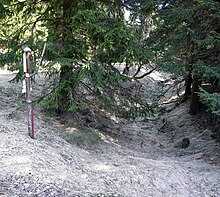 The moat was built between 1624 and 1629 at the instigation of the lords of Lobkowicz in Bohemia and of Schönberg in Saxony . The client was the Saxon Elector Johann Georg I. As early as 1569, the electoral Saxon chief miner Martin Planer carried out the first plans for a raft ditch from the headwaters of the Flöha to the Freiberg Mulde, which had to cross the watershed between the two river catchment areas. But it was not until the 17th century that the Neugraben rafts came into being according to new plans by the chief hut administrator Friedrich Lingke. Georgenthal was the seat of the raft office and there was also a raft house on Betteleck .

For almost 250 years, the raft ditch was used to transport raw wood from what was then Fleyh to the Freiberg mining area. With the construction of the railway connection from Freiberg to Brüx (Most) , rafting on the ditch was discontinued.

Cessation of mining and present

After mining stopped, the ditch supplied the Georgendorfer paper mill with impact water until the 1940s. After the factory closed, the canal was also forgotten. Today, large parts of the trench have been filled or leveled. Since 2013 there has been a cross-border nature trail along the trench, which in sections also carries water again.

Rock breakthrough in the raft ditch with new water flow

Shortly after Fláje, the ditch is built on a steep slope and sometimes carved into the rock. The ditch also crosses several watercourses on the route to Clausnitz, such as the Rauschenbach after about 6.5 km and the Czech-German border that runs here.