The Freiberger Mulde , also called the Eastern Mulde , after the source Moldavský potok ( Moldauer Bach ), is the right, 124 km long source river of the Mulde , whose catchment area of 2,981 km² lies in the Czech Republic and Germany (central Saxony ). With a water flow of 35.3 m³ / s, it is larger than the other source river, the Zwickauer Mulde (or Western Mulde ) with a water flow of around 26.4 m³ / s, which is, however, the longer source river.

The Freiberg Mulde rises in the Czech Republic on the main ridge of the Eastern Ore Mountains two kilometers southeast of Moldava as Moldavský potok (Moldauer Bach) at an altitude of 850  m above sea level. NN between the mountain tops Sklařský vrch ( Glaser-Berg ) and Oldřišský vrch ( Walter-Berg ). The source is only 2.5 kilometers from the source of the Wild Weißeritz and only one kilometer from the headwaters of the Flöha .

Flowing in a westerly direction, it reaches German territory after about five kilometers and forms a short stretch of the Czech-German border. Holzhau , the first German town on the river, lies at an altitude of approx. 600  m above sea level. NN , Rechenberg-Bienenmühle at an altitude of about 545  m above sea level. NN . The valley is deepened by 150 to 200 m compared to the surrounding heights and initially turns gradually to the northwest and then almost exactly north. The Chemnitzbach and the Zethaubach flow in Mulda from the left, and the Gimmlitz from the right in Lichtenberg . The valley is steep and narrow in the further course; between Freiberg and Halsbrücke it is still sunk almost 100 m into the plateau of the Ore Mountains , which gradually descend to the north . In the old mining landscape of the Ore Mountains around Freiberg, the Mulde Valley is home to numerous cultural monuments , especially of a technical nature. The steep slopes are almost completely occupied by natural mixed forest. After the Mulde has passed Weißenborn , Muldenhütten and Hilbersdorf , it reaches its nickname Freiberg .

Below Freiberg and Halsbrücke , the Münzbach and at Großschirma the Kleinwaltersdorfer Bach reach the water from the left. From the right, the Bobritzsch flows southeast of Siebenlehn . After the sharp bend westwards at Nossen and the tributary of the Pitzschebach from the Zellwald, the Mulde Roßwein and Döbeln flows through and receives the Striegis as the first major tributary .

Its largest tributary , the Zschopau, more than doubles its water flow, flows into Schweta . The now stately river passes Leisnig and merges in the Colditz district of Sermuth with the Zwickauer Mulde to form the United Mulde . 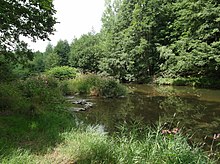 There is geological evidence that the lower valley of the Freiberg Mulde traces an earlier course of today's Elbe , which it took along the edge of the ice during older ice ages .

With the Hammerbrücke , the Alte Conradsdorferbrücke and the Altväterbrücke there are culturally and historically remarkable overpass structures from the 16th century on the Freiberg Mulde.

The Freiberger Mulde sub-route of the Mulderadweg runs along the course of the river .