Town hall in the OT Rechenberg

The border community to the Czech Republic is located in the upper valley of the Freiberg Mulde and forms the eastern edge of the Ore Mountains / Vogtland Nature Park . At 806 m above sea level NN is the Steinkuppe in the municipality, the third highest mountain in the district of Central Saxony.

The site is located on crystalline slates such as gneiss .

The history of Rechenberg-Bienenmühle goes back to its first mention in 1200, when the three-part wooden castle Schanze Rechenberg was built by the Slavic lords of Riesenburg with ramparts and ditch systems; the district of Clausnitz was created after clearing the forest in the 12th century. The name Rechenberg refers to the hay rake from the coat of arms of the Hrabischitz family , the state development of the Hrabischitz took place from its Bohemian places of origin in the north. Rechenberg-Bienenmühle was particularly shaped by the Rechenberg Castle with its weir system , which is considered the ancestral castle of those von Rechenberg (Hrabischitz Germanized). The Rechenberg manor was owned by the Bohemian Hrabischitz family. With this, both the castle and the town with its market, the meeting place for traders , had gained importance. The Ossegger Steig led from Rechenberg over the Betteleck to Ossegg in Bohemia . On February 4, 1398, the Margrave of Meissen bought the castle and the entire property of the Reisenburg family for 40,000 silver thalers from Borso VI. This ended a dispute over property between Bohemia and Saxony . This included 49 villages, huge areas of forest and land, including all farms and mills. By 1438 the first tree trunks were rafted on the hollow . An official fish house was built around 1480 to collect the farmed fish alive before transport and later to transport them to Freiberg or Dresden . On February 2, 1486, a major fire in the castle caused considerable damage to farm buildings and the manor house . The brewery was rebuilt, but the other buildings fell into ruins. In 1534 the village of Holzhau was built and it was under the Rechenberg rule.

In 1647 the Saxon elector Johann Georg I acquired the property from the von Schönberg family , who were lords of Rechenberg Castle from 1501 to 1647. The elector elevated it to the status of an electoral chamber property . The area extended from Rauschenbach to the Gimmlitz and from Niederclausnitz to Hermsdorf / Erzgeb. , Moldau and Grünwald . It was divided by the Mulde into the Nassauer Revier and the Rechenberger Revier. In an act of the Upper Mill (Herklotzmühle in Holzhau) and the lower mill (Boerner mill) and a are Brettmühle mentioned as Hofmühlen. In the board mill, not only sawn timber and squared timber were cut, but also wooden shingles for roofing . In a deed of mortgage dated February 10, 1656, a privilege granted by the prince-elector of the community granted the privilege and freedom to hold a fair . The Elector and King Augustus the Strong approved a second fair in 1709. In 1558 the Rechenberg brewery was owned by Caspar VI. founded by Schönberg. In 1584 the Vorwerk Grünschönberg was built. The large farm had 30 cows at the time and oats and barley were grown. In 1615 the construction of a church building began in Rechenberg, the builder was Heinrich von Schönberg. During the Thirty Years' War , the region suffered greatly from the looting of imperial armies around 1632 and 1633 and the Swedes in 1639. Due to an extremely strong thunderstorm and rain over Rechenberg and the surrounding area, 27 people lost their lives and 13 houses were washed away. In 1624 the expansion of the rafting ditch system began, it also led through the Rechenberg forest district. In 1781 an oil mill was built on the Mulde . From 1790 to 1795 the castle pond was filled in with ruins of the castle, the tower was already in ruins.

During the Napoleonic Wars of Liberation from 1806 to 1813, Austrian and Russian soldiers roamed the Rechenberg area several times and extorted food and fodder . On March 1, 1810, Rechenberg was recognized for the first time with a poem in the Freyberger newspaper . At that time there were 302 people living in the village. On the Goldene Höhe, a forest district and administrative farmstead was built in Rechenberg as the seat of the Rechenberg district forester. In 1850 the second school building was built at Muldentalstraße 36, a new pond was created and in 1855 the Neue Poststraße was expanded, today's Bundesstraße 171 . A major fire destroyed 13 houses in Rechenberg. In the summer of 1873 the railway line from Mulda to Bienenmühle was measured and built from 1875. The volunteer fire brigade was founded on December 6, 1876. On August 16, 1877, the first post office was established in Bienenmühle in the train station, which became an independent post office from 1881. In the same year the Rechenberg community bought the manor house in the village and used it as a community and school house. In 1884 the first summer visitor came to Rechenberg, it was a family from Leipzig. The railway line from Bienenmühle to Moldau was opened on May 18, 1885. 10 freight trains with over 45 wagons ran every day , pulled by three Saxon locomotives . The lignite was transported from Bohemia for the Saxon industry in Nossen , Freiberg and Chemnitz . In the same year a machine house and a locomotive house (round house) to accommodate 10 steam locomotives and a turntable with a diameter of 18 meters were built . On March 20, 1893, the Erzgebirgszweigverein Rechenberg-Bienenmühle was founded. From 1899 to 1901 the new church was built in the neo-Gothic style. Rapid population growth was due to the railway connection and industrialization. As early as January 1, 1925, the two communities were merged under the name Rechenberg-Bienenmühle. On August 1, 1926, the inauguration of the carried walking home (hostel) with 30 beds. In 1944, 10 barracks and a wash house were built on Alten Strasse Rechenberg to accommodate refugees and displaced persons .

On April 15, 1945, the Red Army launched low-flying attacks on the hospital trains in Bienenmühle. The Muldenbrücke in Bienenmühle was blown up on May 7, 1945 by the German Wehrmacht . The Red Army marched in at around 3 p.m. in connection with the looting and rape of German women. From August 1945 to February 1946 the sawmills and furniture factories were dismantled as reparations to the Soviet Union . It affected a total of 9 companies and 13 organizations and associations, these were expropriated and confiscated. The train service from Hermsdorf-Rehefeld to Moldau was stopped on May 8, 1945, the tracks were dismantled . On July 1, 1950, the first HO sales point (trading organ of the GDR) was opened in Bienenmühle, Dorfstrasse 8. The 40 meter high chimney and parts of the locomotive house at Bienenmühle station were blown up on April 1, 1968. The Red Army made strong military movements to the Czech border between July 20 and 27, 1968. In the summer of 1971, the former manor house was opened Renewed on the outside and still used as a school. The next renovation took place in 1992 for use as a community center . With effect from February 7, 1972, the train service between Holzhau and Hermsdorf-Rehefeld was shut down and the tracks were removed. With the forced nationalization of the 6 private companies, the number of handicrafts decreased. Few new businesses settled here. On January 29, 1990, a large demonstration about the old school took place, calling for German reunification , the abolition of the SED, the removal of the mayor and the dissolution of the state security . From 1991 to 1992 the companies Möbelwerke Bienenmühle, Hochbau Hartmann, Stuhlfabrik Rechenberg and Fame Bienenmühle were reprivatised. In 1993, the demolition and renovation work began on the brewery's buildings as a measure for a new building . In the same year, on November 6th, the large community of Rechenberg-Bienenmühle and the communities of Holzhau and Clausnitz were formed.

The following population figures refer to December 31 of the previous year with the territory January 2007:

Source: State Statistical Office of the Free State of Saxony

In June 2015, Michael Funke was elected to succeed Werner Sandig with 51.0% of the vote.

The Saxon Brewery Museum and the neo-Gothic church in Rechenberg are among the most famous sights of the town . Rechenberg-Bienenmühle has a historic town center, which includes the small market, the former manor house of the castle ruins, the brewery, the raftsman's house and the former village school, an ensemble of well-preserved half-timbered houses. In addition to the village two- and three-sided courtyards of the district, the village church of Clausnitz has a character that is well worth seeing due to its interior design. Remnants of the former Neugraben rafts have also been preserved. This connection between the Flöha from Fláje (Fleyh) to the Freiberg Mulde , which ended in Clausnitz in the Rachel, served the timber rafting industry for Freiberg mining for over 350 years . 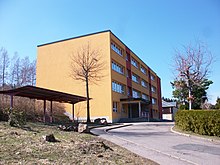 The district of Clausnitz is characterized by agriculture. The largest employer is the agricultural cooperative "Bergland" Clausnitz eG In Bienenmühle, the Bienenmühle Möbel GmbH produces, the Erzhütte (mail order company and specialist shop for Erzgebirge folk art) is based here, there is a supermarket, hardware store, baker, butcher, doctor and pharmacy, as well as one Kindergarten and a middle school. Bienenmühle is thus the economic and social center of the community. The church, the town hall and the Rechenberg brewery with the Saxon brewery museum are located in Rechenberg. Holzhau has been shaped by tourism since the GDR era. There are 9 restaurants and over 600 guest beds. In winter, two double T-bar lifts, a toboggan slope and around 80 km of cross-country trails attract numerous tourists to the region.

The federal highway 171 runs through the municipality . In addition, the municipality of Rechenberg-Bienenmühle is today's end point of the Nossen – Moldau railway line , which operates every hour between Freiberg and Holzhau. The railway line is of particular importance for tourism. There are also bus connections to Olbernhau, Dresden, Seiffen, Freiberg and Altenberg.

Rechenberg-Bienenmühle has a high school.